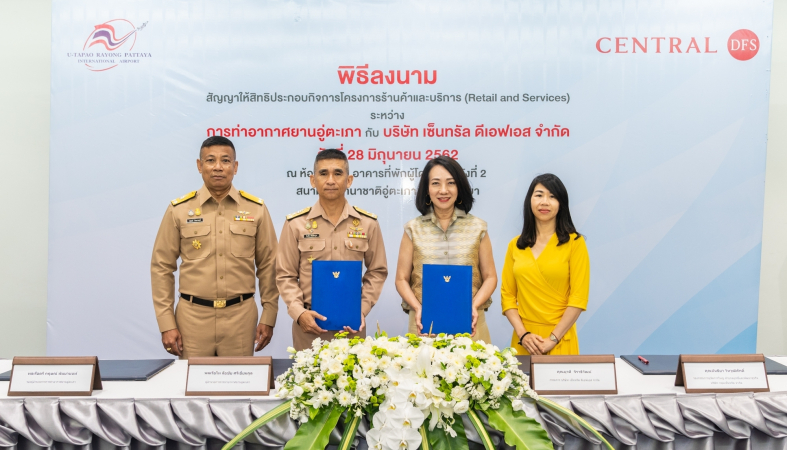 Central DFS is ready to serve tourists at the U-Tapao International Airport, with a large range of shops catering to 3 million tourists at the new Thai airport, the company announced on Monday.

Central DFS Co Ltd. has signed a contract with the Royal Thai Navy to operate retail and service areas at Terminal 2 of U-Tapao Rayong-Pattaya International Airport, covering 1,400.5 square metresin area, with a retail and services concession running for 10 years.

Central DFS director Yuwadee Chirathivat said that the company was confident in the potential of U-Tapao International Airport, as part of the Eastern Economic Corridor (EEC) special economic zone, being an important regional airport with a capacity of 3 million passengers annually. There are obvious opportunities for a strong collaboration between the two companies bidding for the retail and services concession. Central Group has over 72 years of retail expertise and has now expanded to many business sectors with more than 3,700 stores in Thailand and operations in an additional 17 countries around the world. DFS Ventures Singapore has been in the luxury tourist retail industry for more than 59 years and is a world-class operator of duty-free and retail spaces in airports and downtown duty-free outlets in 13 countries on four continents, including Singapore’s Changi Airport, as well as San Francisco and Los Angeles Airport in the USA.

The clarity, transparency and accountability of the Royal Thai Navy’s concession bidding process is considered a standard for such auctions. Central is committed to develop and promote the commercial space at U-Tapao International Airport together with the Royal Thai Navy, as an important destination and gateway to Thailand’s eastern seaboard, which will attract tourists, international business people and Thais to experience an impressive and memorable diversity of products and services.

U-Tapao International Airport Director, Vice Adm. Luechai Sri-eamgool, said that the government had a policy to develop U-Tapao International Airport as the country’s third major commercial airport, to deal with the growth of both domestic and international aviation. This has resulted in the construction of a second passenger terminal to increase the airport’s passenger capacity. In developing the airport to international standards, it has been necessary to provide facilities and enhance the quality of services for the convenience of passengers. Bidding was thus invited from Thai companies in the retail and service sectors. The auction resulted in the airport granting concession rights to Central DFS for its plan to invest in, and develop, 1,400.5sqm of space for retail and service outlets at Terminal 2.

Up until May, the airport served as a hub for 16 airlines, offering 32 routes from China, Russia, Malaysia and the UK and servicing more than 1 million passengers. These are made up of 45 per cent domestic and 55 per cent international passengers (50 per cent Russian, 40 per cent Chinese, 3 per cent Kazakh and 3 per cent Malaysian). Most Russian tourists arrive as part of a group tour, whilst domestic travellers are foreign individual tourists. More than 2 million passengers are expected in 2019.

Central DFS says it is confident that U-Tapao International Airport will become another important place for tourism and logistic systems, due to its location just 30 km from Pattaya, one of the country’s key tourist destinations. U-Tapao International Airport is administered by the Royal Thai Navy and is located in the vicinity of many industrial sites in Rayong and Chonburi. As such it is convenient for travel to the East of Thailand and will become another major Thai airport bringing revenue into Thailand.