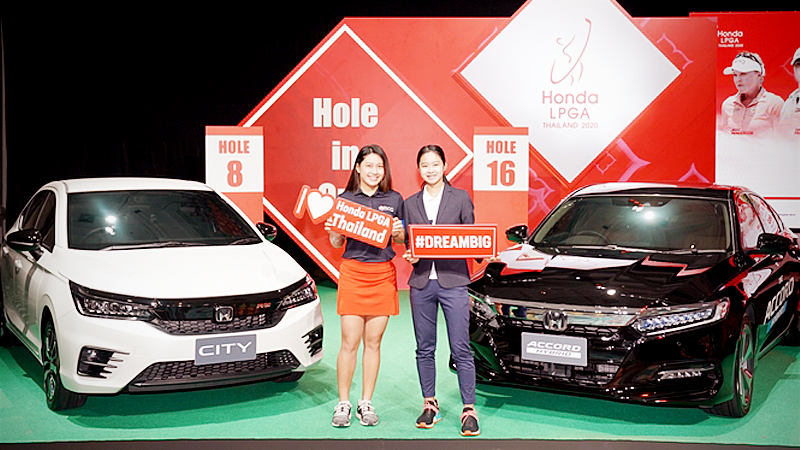 The world’s top 70 female golfers will be vying for a prize purse of $1.6 million (about Bt53 million). It will also mark the 14th year of Honda as the title sponsor of the Honda LPGA Thailand. For the first time in the tournament’s history, two special hole-in-one prizes will be awarded – an All-new Honda City, RS variant, worth Bt739,000, and an All-new Honda Accord Hybrid, Hybrid Tech variant, worth Bt1,799,000.

“To mark the 14th year of Honda as the title sponsor of the Honda LPGA Thailand, we have additional bonus prizes for players aside from the prize purse of $1.6 million (Bt53 million). This year, for the first time, we have also prepared two hole-in-one prizes: an All-new Honda City, RS variant, worth Bt739,000 on the 8th hole and an All-new Honda Accord Hybrid, Hybrid Tech variant, worth Bt1,799,000 on the 16th hole,” said Pitak.

The Honda LPGA Thailand 2020 will once again, fly the inspirational ‘Dream Big’ flag, to inspire golfers from all backgrounds and skill levels to pursue their dreams and achieve their very best in the world of golf. In conjunction with the tournament, there will be a host of activities and a full range of facilities to welcome all visitors. During the tournament week, the players will have the opportunity to taste exquisite Thai cuisine, experience Thai hospitality and participate in traditional Thai Benjarong porcelain painting as part of the official photo call which aims to promote Thai culture and traditions to the world.

Fund raising continues to be an integral part of the tournament and the Charity Night, of which the main highlight is the charity auction, which will see various autographed memorabilia contributed by top players auctioned off to the highest bidders. All funds raised will go to the tournament’s long time charity alliance with the Siriraj Foundation as well as the betterment of the Baan Mab Fag Thong School in Chonburi.

Winnie Heng, Vice President & Managing Director of IMG in Thailand, said “Besides the on-course action, there will be a wide variety of activities for the spectators to participate in. Golf fans should look out for the chance to compete with the professional golfers in ‘Beat The Pro’; mum and dads can drop their kids off at our all new Kids Zone; there’ll be an assortment of food offerings and good music in the Chill Zone. Another key feature this year is ‘The Green Village’ a new sustainable space, that will have interactive and informative booths, focused on helping to improve our environment. In line with one of the key ambitions of our tournament – sustainability, we are calling upon all golfers, spectators and tournament staff to take up the cause and join us in reducing single-use plastics and properly separating trash. Other ‘Green’ initiatives by the tournament will include the use of bio-degradable utensils and food packaging , reducing the use of plastic, especially single-use plastic and we will have a composting machine on site which will turn all organic and food waste into fertilizer”.

Atthaya “Jean” Thitikul, a Thai invitee to the Honda LPGA Thailand 2020 said, “The Honda LPGA Thailand is a major tournament that is respected globally, and one that golfers are always excited to compete in, due to the strong player field every year. I’m thrilled to have the opportunity to participate in this tournament again and will do my very best for all the Thai fans.”

Phatiyuth Jaiswang, Acting Senior Vice President, Office of Television of MCOT Public Company Limited, said “We are pleased to be the official broadcaster of the Honda LPGA Thailand for three consecutive years. This year, once again, Channel 9 MCOT HD 30, will broadcast the competition for all four days as well as through our online channel on www.mcot.net to 22 million households nationwide.”

Merchandise and tickets including VIP tickets and Premium Grandstand tickets are at www.hondalpgathailand.com. VIP tickets come with access to the Clubhouse hospitality at The Siam Country Club Pattaya, Old Course.