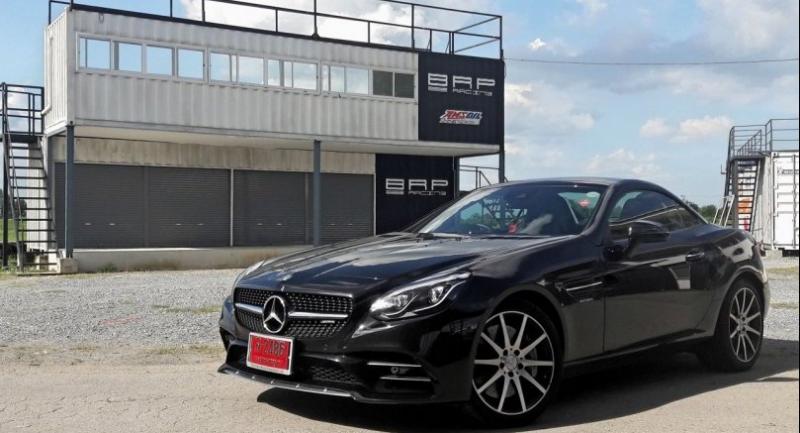 Mercedes roadster delivers supercar sound effects, with crackles and everything

I first drove the Mercedes-Benz SLK in 1996 during the global test drive event in northern Italy and after more than two decades, the compact roadster concept is still being offered by the German automaker -- in the guise of today’s SLC.

Actually, the SLC was introduced a couple of years ago, and Mercedes decided to change the model name from SLK as the new model shared the same underpinning with the C-Class of that generation.

In Thailand, the SLC is available in two versions – the SLC 300 AMG Dynamic with the regular turbocharged 2.0-litre engine priced at Bt3.99 million, and the SLC 43, which is powered by a 3.0-litre twin turbo engine and priced at Bt4.99 million.

Mercedes-Benz has been enjoying tremendous growth in the Thai market during the past several years, thanks to the expansion of its product portfolio. Apart from increasing the number of locally-assembled models at the TAAP factory in Samrong, it has also been offering a comprehensive range of imported models and AMG-developed cars such as the Mercedes-AMG GT S, A 45, CLA 45, GLA 45, C 63 S Coupe as well as the SLC 43.

The heart of the SLC 43 is its V6 twin turbo engine that is also shared with other models such as the recently-launched GLC 43. While the previous AMG version – the SLK 55 AMG – is powered by a mighty 5.5-litre V8 that pumps out over 400hp, the new power plant might seem like a downgrade. There’s no signature from the AMG mechanic like in previous models, and the engine is actually mass-produced at a Mercedes factory, not at the AMG factory in Affalterbach.

Luckily the lighter V6 is mated to a quick-shifting 9-speed automatic that makes the SLC 43 as quick as the SLK 55, with 0-100km/h acceleration being claimed at 4.7 seconds, and an electronically-limited top end of 250km/h.

Engine sound isn’t a highlight when driving around Bangkok in Comfort mode, but select Sport+ and all the exhaust flaps are fully open to deliver supercar sound effects, with crackles and everything. Now it has character!

Mercedes claims an average fuel economy of 7.8l/100km and CO2 of 178g/km, which is great. Meanwhile, I was able to average about 12.5l/100km in Comfort mode and I wasn’t speeding all the time. It’s just when you are faced with an open road ahead that the urge to accelerate takes over, even for a short time. I had the car for several days and towards the end just left it in Sport+ and turned off the stereo just to enjoy the engine’s snarl.

The front strut and rear multi-link suspension is beefed up with stiffer damping while the steering also gets extra damping, is direct and has lots of weight. Driving the SLC 43 in the city can be torturous for some, particularly the ladies, due to the heavy steering and the stiff suspension, although the ground clearance is generous and helps you get over bumps and bridges without scraping the underbody.

Take the SLC 43 to the track like I did and you’ll have a great time. At the Thailand Circuit, the SLC 43 provided high levels of driving pleasure of driving a powerful rear-wheel-driven car. The large amount of torque allows the driver to power oversteer it out of corners, and the sports exhaust system helps raise the adrenaline level further.

High-performance AMG brakes are easy to judge in normal driving and also performed well in the circuit without any fading.

In terms of design, it is a pity that the SLC 43 doesn’t stand out much when compared to the SLC 300, which actually also gets AMG design treatment. From the side, you’ll notice the long front end and short rear, while the 18-inch wheels and sporty tyres take up much of the presence.

Inside, the cabin is highlighted by the red seatbelts, black leather sports seats,” chequered flag” dials, and chrome trim, plus of course the flat-bottomed multi-function steering wheel.

The interior is where you’d notice some old Mercedes styling, such as the tiny display screen and boxy centre console. A surprising feature to see in modern-day Mercedes is the manual control knobs for the air=conditioning system, instead of fully-automatic.

An additional display between the speedometer and rev counter that I liked is the AMG page that shows detailed gear positions as well as temperatures for engine oil, water and transmission oil.

The driver and passenger enjoy good space and won’t feel cramped in the cockpit, and the driving position isn’t as low as other sports cars, making it easier to get in and out. Visibility is good except when you’re trying to look back past the C-pillar (that blocks much of the view).

There is a lack of space for placing gadgets (phones, wallets, etc) though, and you’d often be forced to use the pockets on the door panels (or the one behind the passenger seat).

The retractable roof can be operated while the car is moving up to 40km/h. When the roof is closed, there are slight squeaks to be heard, which is forgivable for a convertible. The good news is that wind noise that gets through the retractable hardtop is effectively tamed, resulting in a rather quiet cabin while cruising on a smooth road. Gotta admit that I drove with the roof closed all the time, being no fan of open-top driving in Thailand weather conditions.

Unfortunately, the vario-roof mechanism requires space, and it’s the luggage area you have to sacrifice. Trunk space is usually 335 litres, but with the top down, there is just 225 litres of space left. The spare tyre also sticks out and secured with a nylon strap -- you don’t even have a flat luggage area and can’t properly make use of all the space.

While die-hard AMG fans might not like the idea of a turbocharged V6s replacing the large handcrafted V8s the company is well-known for, AMG is expanding its presence in the market with fewer hardcore products at more affordable prices.