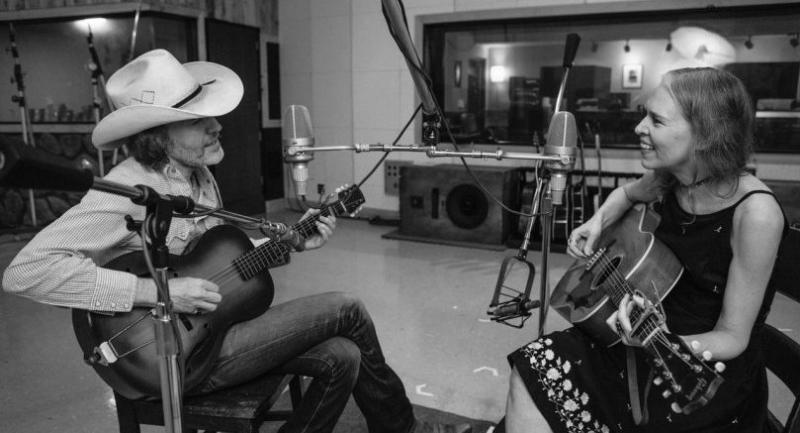 Gillian Welch and David Rawlings in their studio in Nashville. PHOTO: DAVID MCCLISTER FOR THE WALL STREET JOURNAL

Folk music duo Gillian Welch and David Rawlings were frustrated by the quality of vinyl LPs being produced today. So they decided to cut their records themselves.

“What people do nowadays is take a digital file and just run vinyl off that,” says Rawlings, a lanky musician who plays a 1935 Epiphone Olympic guitar. “In my mind, if we were going to do it, I wanted to do it the way the records I love were made—from analog tapes.”

The Nashville-based singer-songwriters, who gained fame with “O Brother, Where Art Thou” in 2000, spent US$100,000 (Bt3,335,000) to buy their own record-cutting contraption in 2013. The cutting lathe makes the master copy of a record—the one sent to a pressing plant for mass reproduction. The couple’s first LP, a re-issue of their 2011 Grammy-nominated “The Harrow & the Harvest,” arrived on July 28.

Welch and Rawlings have gone to extreme lengths to solve a problem many music aficionados say is an open secret in the music industry: Behind the resurgence of vinyl records in recent years, the quality of new LPs often stinks.

Old LPs were cut from analog tapes — that’s why they sound so high quality. But the majority of today’s new and re-issued vinyl albums—around 80 per cent or more, several experts estimate—start from digital files, even lower-quality CDs. These digital files are often loud and harsh-sounding, optimised for ear-buds, not living rooms. So the new vinyl LP is sometimes inferior to what a consumer hears on a CD.

“They’re re-issuing [old albums] and not using the original tapes” to save time and money, says Michael Fremer, editor of AnalogPlanet.com and one of America’s leading audio authorities. “They have the tapes. They could take them out and have it done right—by a good engineer. They don’t.”

As more consumers discover this disconnect, vinyl sales are starting to slow. In the first half of 2015, sales of vinyl records jumped 38 per cent compared to the same period the prior year, to 5.6 million units, Nielsen Music data show. A year later, growth slowed to 12 per cent. This year, sales rose a modest 2 per cent. “It’s flattening out,” says Steve Sheldon, president of Los Angeles pressing plant Rainbo Records. While he doesn’t see a bubble bursting—plants are busy—he believes vinyl is “getting close to plateauing.”

When labels advertise a re-issued classic as mastered from the original analog tapes, the source can be more complicated. Sometimes they are a hodge-podge of digital and analog. Often “labels are kind of hiding what’s really happening,” says Russell Elevado, a veteran studio engineer and producer, who has earned two Grammys working with R&B singer D’Angelo.

Rawlings says a Netherlands-based label, Music On Vinyl, used a CD to make vinyl copies of Welch’s 2003 album “Soul Journey,” getting a licence from Warner Music Group. Welch and Rawlings, who didn’t have rights to release the album in the UK, found out when fans saw the vinyl selling on the Internet. They successfully convinced Music On Vinyl to destroy the 500 copies that had been pressed, reimbursing the firm 3,300 euros (Bt129727) for its costs. “This is commonplace,” Rawlings says. A representative of Music On Vinyl could not be reached.

Major labels say they use original analog masters when possible. Sometimes tapes are too brittle to be used to make a vinyl master. Low-quality re-issues may be the result of less-reputable labels that can’t afford to shell out big bucks for engineering and record-pressing, says Billy Fields, a veteran vinyl expert at Warner Music Group. Universal Music Group and Sony Music Entertainment, the two other leading music companies, didn’t make anyone available to comment.

Today’s digital files can sound fantastic—especially for hip-hop and dance music. But engineers say they need to be mastered separately for vinyl in order to have the right sound. To meet deadlines for releasing new albums, labels can’t always cut vinyl to the absolute best audio quality, says Fields, who declined to discuss specific examples on the record because it might alienate others in the industry.

Another culprit for vinyl’s slowdown is cost: Sheldon estimates vinyl has gone up four to six dollars per album in recent years. So-called “180-gram” or “audiophile” records, marketed as higher quality, can cost $30 to $40. Their heaviness makes them more stable during playing, Sheldon says, and such records might last longer. But any sound differences are “very marginal.”

As low-quality vinyl proliferates, Welch and Rawlings are taking the high road.

It took five years to get their record-cutting equipment up and running. Once they bought their lathe, they found a tech, who gave up his job at a particle accelerator for the new job. “The scientists who developed how to cut good stereo were the brightest people in our country at that time,” Rawlings says. With their trusted mastering engineer Stephen Marcussen, the team customised the lathe for Welch and Rawlings’ sparse, haunting acoustic music.

Songs are generally recorded in a studio digitally today. (In Welch and Rawlings’ case, they chose to record using analog tape.) A mastering engineer then fine-tunes the recorded music to ensure the album, often the product of myriad studios, sounds consistent. Using a lathe, the music is engraved onto a “lacquer,” the technical term for the master copy from which copies are pressed in plants.

The goal is to put as much sonic information on the record as possible. A high-quality LP can give listeners the sensation of instruments or sounds occupying different points in space—a “three-dimensional” quality that Fremer says evokes a live performance. Welch likens it to the difference between “fresh basil and dried basil.”

The vinyl version of “The Harrow & the Harvest” is “mesmerising,” says Fremer, who heard a test copy. On August 11, the couple, which often records as “Gillian Welch,” will release a new album, “Poor David’s Almanack,” under the “David Rawlings” name, before re-releasing more old albums. Having launched a label and souped up a derelict Nashville studio years ago, they may cut and re-issue albums by other artists, they said, effectively becoming a full-service, vertically-integrated—if tiny—old-school music company.

Welch and Rawlings, whose careers took off as the CD era crashed into the age of iTunes, feel like putting out vinyl now brings them full circle. “It’s like an author who has only ever released an e-Book,” Rawlings says. “You see a book in print and bound and you feel like you’ve finally done what you were aiming to do."