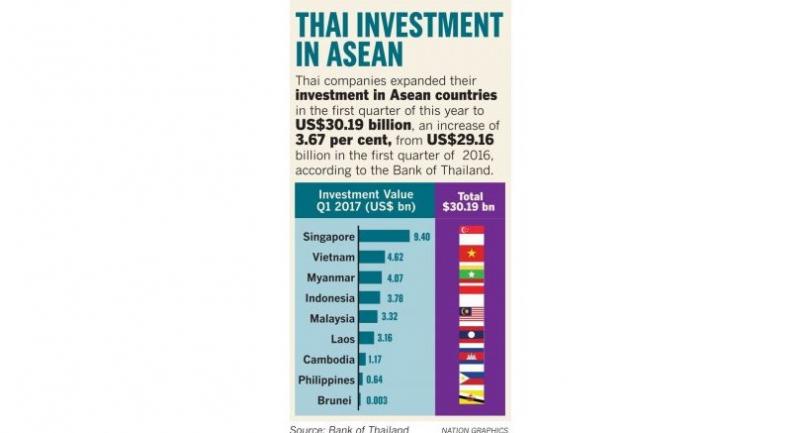 THAI companies expanded their direct investment in Asean countries in the first quarter of this year, with outflows rising 3.67 per cent to US$30.19 billion from the previous quarter, Bank of Thailand figures show.

Singapore was the most popular destination for Thai investments in the quarter, followed by Vietnam and Myanmar.

“We increase our investment in Asean when we see opportunities to expand our business, especially in the CLMV countries,” Ch Karnchang Plc president Supamas Trivisvavet said, referring to Cambodia, Laos, Myanmar and Vietnam.

Ch Kranchang has invested in a hydropower electricity plant in Laos and has also expanded its business in Myanmar.

Supamas said that the company, when expanding its investment in overseas markets, especially in Asean countries, has to learn about the target country’s legal system. Time and money must also be spent on feasibility studies, gaining an understanding of local communities’ needs and the most effective way to conduct negotiations, she said.

All this was required, she said, because most lenders that consider providing loans for investment projects always ask the same question: how will you manage the business risks?

“When we expand our investments overseas it has not always been easy,” Supamas said. “But is a challenge for our us to complete all the necessary preparatory work in order to manage the business risk before we make any final investment decision.”

Siam Cement Group (SCG) is another leading Thai conglomerate that has expanded its investment in the Asean region since the Asian financial crisis broke out in 1997.

SCG president and chief executive officer Roongrote Rangsiyapash said the group had expanded its investments in the region by focusing on three businesses: construction raw materials, packaging, and petrochemical.

“We see business opportunities to expand our investments in the region when Asean shows stronger economic growth compared with other regions,” he said.

SCG has announced its latest investment in the region; it is pouring Bt188 billion into a petrochemical project in Vietnam through a joint venture with a Vietnamese partner.

Thai Beverage Plc, owned by tycoon Charoen Sirivadhanabhakdi, has also been on the expansion path in Asean, taking over Singapore-based F&N.

The group has announced a business strategy up to 2020 that will see the group increase its investment in Asean countries in a focus on the food and beverage business.

Thai Beverage president and chief executive officer Thapana Sirivadhanabhakdi said the group was drawn to Asean because of the size of the market and its scope for business expansion.

According to a survey by the Stock Exchange of Thailand, listed companies made direct investments overseas of Bt185.11 billion in 2016, a jump of 146.25 per cent from the Bt75.17 billion recorded at the end of 2015.

Listed companies engaged in agriculture and food processing led the way, logging Bt68 billion in overseas investments at the end of 2016. Some 31 per cent of these investment flows went to the United States, with 28 per cent to Asean countries and 13 per cent to Europe, the SET’s survey found. The survey also found that 198 listed companies had expanded their investment overseas, with 64 of these companies putting money into Myanmar.