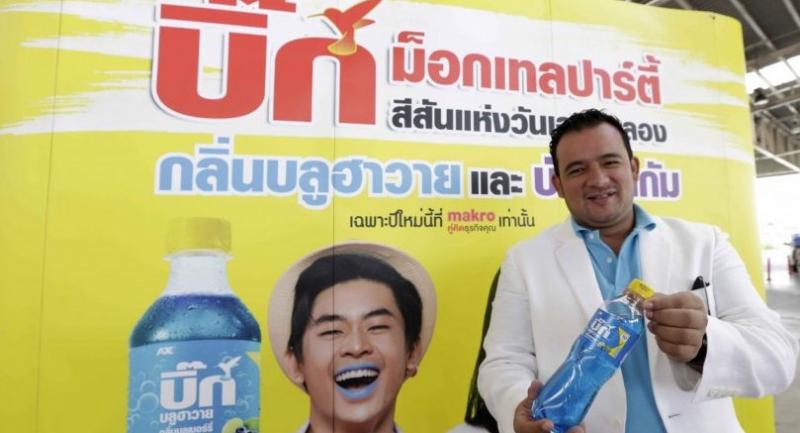 Fabian Mosquera, country manager of Ajethai Co Ltd, poses with one of the new soft drink flavours to be distributed exclusively at Makro cash-and-carry wholesale stores for a four-month period, starting today.

Growth will come only from the functional drinks category, an estimated 4 per cent increase this year. Other major categories, such as cola drinks and ready-to-drink green tea will suffer a decline in sales.

Mosquera said that the ongoing economic situation is one of the biggest negative factors resulting in the slowdown of beverage consumption in Thailand. Thai consumers have also become more health-conscious and tend to consume healthy beverages with less sugar or sugar-free. The government has also imposed an excise tax on beverage products with high sugar content.

Mosquera said the trend in Thailand is similar to the global trend in other markets such as North America, Africa, and Asia where consumers have moved towards innovative and healthy products.

Mosquera said that the launch of new innovation products, especially in the healthy drinks category, is a key strategy initiated by Ajethai to be in line with the company’s principal value – to encourage a healthy life for Thai consumers.

He added that the creation of new innovations could be made in both the company’s existing beverage categories as well as the launch of new opportunistic categories such as functional drinks, valued water, juices, and isotonic enhancements.

Ajethai is a subsidiary of Aje, one of the largest multinational beverage companies, with 13,000 direct and indirect employees. The company sells its products directly or through distributors in 23 countries throughout Latin America, Asia and Africa.

In Southeast Asia, Aje has a presence in Thailand, Indonesia and Vietnam with products being exported and distributed in Cambodia, Myanmar and Laos. With 28 years of experience, Aje is currently the fourth largest non-alcoholic beverages company in sales volume and the third in soft drinks in those countries where it operates.

Ajethai yesterday announced a strategic partnership with Makro, the cash-and-carry wholesale centre for professional business operators in Thailand, to ambitiously expand its portfolio and retail coverage throughout the Kingdom. Under the cooperation, the company has launched two new exclusive soft drink flavours, BIG Blue Hawaii and BIG Bubble Gum, available from today – only at Makro stores – for the next four months. The retail price will be Bt10 for a 465ml bottle.