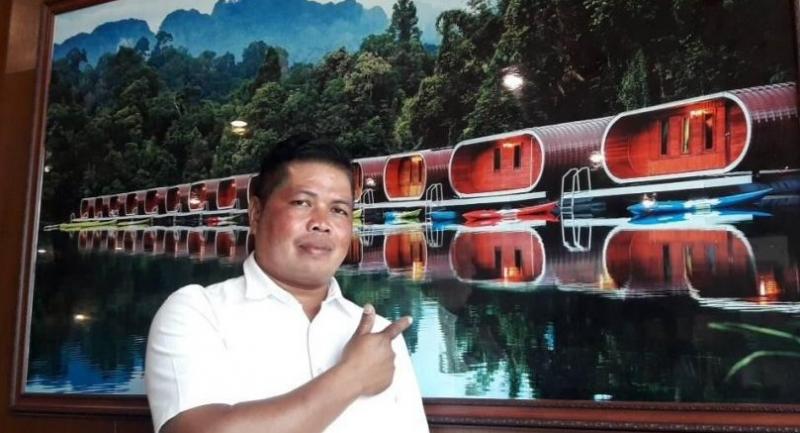 Narongrit Tongmusit shows off his capsule-style resort at Ratchaprapha Dam in Surat Thani province. The business now takes in up to Bt700,000 a month.

UPHEAVAL arising from the construction of a dam in Surat Thani province prompted a business idea from a farmer who was paid out to move from the area.

Narongrit Tongmusit, now 46, had to find another livelihood after the government resolved to move people from his farming area for the construction of the Ratchaprapha Dam.

He turned to fishing and invested his land compensation and earnings in a project to build nine holiday units made of bamboo in a resort at the dam in 2005. He has since built up the resort to 32 holiday units in a more modern style that generate income of Bt700,000 a month.

“When I moved off my own land after the government’s land expropriation in 1999, I tried my hand at being a fisherman and used the money from the land expropriation to buy a boat to make a business out of picking up tourists who visit the dam,” Narongrit said in an interview with The Nation recently.

Then the government eased land-use regulations to enable businesses to set up around the dam, especially for holiday resorts. The government’s move in 2004 allowed for the development for resorts around the dam of less than 2,000 square metres.

“I registered with the government and secured the right to right to start a business,” Narongrit said. “I spent my savings of about Bt10,000 to build the nine villas made of bamboo at the dam.

“At the same time, I continued to work as a fisherman and provide boat services to customers.”

The number of tourists - both domestic and foreign – visiting the dam had been growing by double digits every year. This prompted Narongrit to expand the scale of investment with 32 capsule-style holiday units. With an outlay of up to Bt10 million, he is now able to better serve the growing ranks of tourists drawn to what has been dubbed the Guilin of Southeast Asia, named after the popular resort town in southern China.

The fresh investments funds came from both his cash savings and bank loans, Narongrit said.

The resort’s expansion resulted in average monthly income rising from Bt200,000 to Bt700,000. Endorsement from word of mouth has also swelled demand for stays at the complex, called Pa Putawan. More than 60 per cent of customers visit more than three times a year

“We offer a reasonable price for our customers, with two days and one night costing only Bt2,800 per person,” he said. “That includes the villa, food, and boat travel to and back.

“This is a reasonable price for our customers. We also make clear to our customers about the level of service that we provide to our guests, such as not having a private bathroom. All guests have to use shared bathrooms when they stay here.

“We are sincere with our customers and so they are clear on what they can expect from us.”

With the resort’s success, the company has created 40 jobs for people living around the dam and this helps to sustain the livelihoods of local people.

“My business creates income for me and my team,” Narongrit said. “And we have succeeded in creating a friendly environment around the dam. This brings benefits for both the government and the community, who can generate income from the dam after they previously had to move out to make way for its construction.”