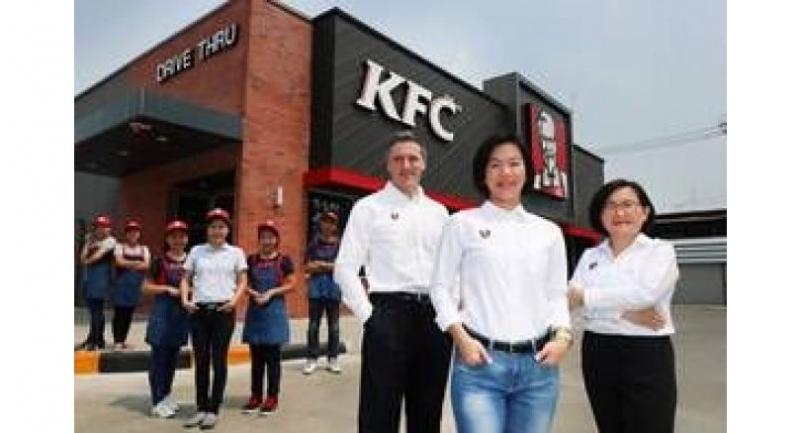 YUM Restaurants International (Thailand) Co Ltd, the operator of the KFC franchise in Thailand, has opened 60 more KFC restaurants in 2017, a record number of new restaurants in a single year.

In 2017, regarded by the company as the year of the fastest growth, it will also complete the transfer of KFC restaurants to the latest franchise partner in December. The company is also moving forward with the establishment of Brand Centre, focusing on standards control, brand strategy, marketing, digital and innovation. The company plans to increase the number of nationwide KFC restaurants to the target of 1,000 and remain the number one quick service restaurant in Thailand.

Waewkanee Assoratgoon, general manager – KFC, YUM Restaurants International (Thailand), said: "For the over 33 years that KFC has been operating in Thailand with our co-founding partner, Central Restaurants Group (CRG), we jointly worked hard to achieve our growth target. That is to make KFC the number one brand in Thailand. Today, we have two more franchise partners; Restaurant Development Co, Ltd (RD), the second franchise partner, and the third franchise partner, The QSR of Asia (QSA), which will manage 252 KFC restaurants across the country once the restaurant transfer is completed in December 2017.”

“2017 is considered as the year of huge success for KFC Thailand. In addition to the recently announced franchise deal with QSA, KFC has made a record high for its business expansion, with as many as 60 new restaurants opened. Among them are 15 new drive through restaurants, which is also a record high in a year. All the success would not be possible at all if we do not have the support from our franchise partners. This year, CRG has opened as many as 25 new restaurants, while RD has managed to open 15 new restaurants. With their commitments to building continuous growth and expertise in this business, it is expected that they will be our great business partners to continue driving KFC to the forefront of the restaurant chain business in Thailand.”

After the completion of transfer to QSA, YUM will be a 100 per cent franchisor with the key responsibility to control quality standards, branding and marketing strategies as well as innovation on products and services to ultimately strengthen KFC’s market positioning in Thailand.