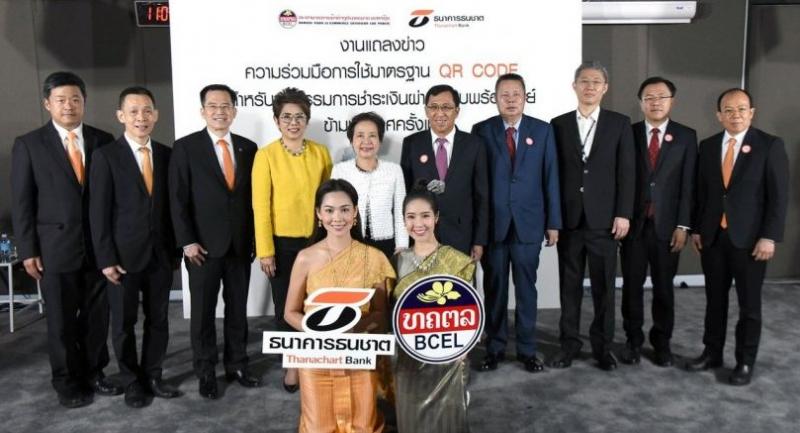 The two banks yesterday announced a strategic partnership for the service at the Bank of Thailand.

Nanthalath Keopaseuth, deputy managing director of BCEL, said QR code payments have been gaining in popularity, with the number of vendors registering for the service rising about 20 per cent a month and transactions have increased 10 per a month.

BCEL’s customers number about one million, out of a national population of six million. About 200,000 of them use the mobile banking application, said Nanthalath.

Currently, about 1,000 vendors have registered to use the bank’s QR code payment system.

Nanthalath said he expected more and more people, especially the young, would be drawn to this convenient payment method, adding that almost everyone in the country has a smartphone on which they download the mobile application.

BCEL has about 90 per cent of the market for mobile banking business in Laos, he said.

Lao visitors using QR code payment in Thailand will be subject to surcharge, which is expected to be lower than the rate of rate 2-3 per cent charged on financial transactions via credit cards, Nanthalath noted.

The combination of lower charges and greater convenience will encourage people to make use of the QR code mobile application, he said.

Anuwat said the cross-border QR code payment service would reduce risks from carrying cash and the cost of exchange rate conversions between the two currencies.

He said the bank would expand the QR code payment system by cooperating with peers in other countries, such as Cambodia, Myanmar and Vietnam. The boom in tourism within the region provides lot of opportunities for growth in cross-border QR code payments, he said.

Last year, the number of people from the CLMV countries - Cambodia, Laos, Myanmar and Vietnam - visiting Thailand reached 3.7 million and they spent a total of Bt113.7 billion.

Thanachart Bank also plans to work with banks in these four counties in order to provide the same service for Thais visiting their countries.