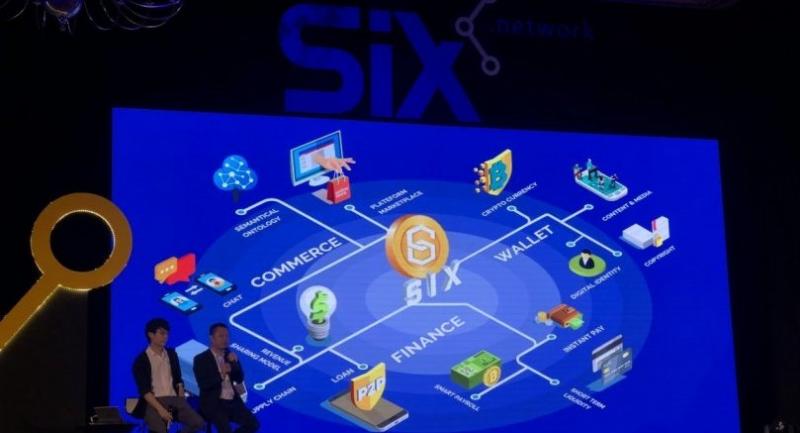 Natavudh Pungcharoenpong, left, and Vachara Aemavat, right, co-founders and co-chief executives of Six Network, say the company’s services will support the development of an innovative economy in Thailand.

THAI startups Ookbee U and Computerlogy yesterday joined South Korean peer Yellow Digital Marketing Global (YDM) in officially launching a joint-venture company that will initiate a cryptocurrency and help foster the development of the digital economy in Thailand.

The joint venture, Six Network, will offer the digital currency, called SIX, for a use as a utility token. The alliance between the partners aims to create what they call “a more transparent, fair, secure, and efficient ecosystem for all stakeholders” across all parts of the digital economy.

Contributing investment of 40 per cent each in Six Networks are Ookbee U and YDM, a subsidiary of Yellow Mobile. Ookbee U is a joint venture between Ookbee and Chinese technology giant Tencent. Computerlogy put in 20 per cent of the investment.

Six Network aims to create and operate SIX as a utility token for use by participants in the emerging innovative and digital sectors of the new industrial landscape – not only in Thailand, but throughout Asia and, ultimately, across the world.

The joint venture has initiated one billion SIX tokens, each valued at 10 US cents. It aims to gain hard currency from an initial coin offering (ICO) valued at US$43 million.

Natavudh Pungcharoenpong, co-founder and co-chief executive officer of Six Network, said that the company’s ambitions for SIX as a utility coin for the global digital creative industry will start with Thailand and other Asian countries, especially South Korea, capitalising on YDM’s presence there. Expansion to countries farther afield would follow.

The partners aim for SIX to be the “Internet of Digital Services”, providing decentralised solutions for a range of transactions in the digital and creative economies.

Under Six Network, there are more than 40 digital and creative startups in South Korea, Thailand and other Southeast Asian countries. It brings together an alliance of more than one million content creators, social media influencers, comic writers, VDO producers and more than 10 million active users of platforms offered under the alliance.

“On the Ookbee U platform alone, we have 330,000 creative workers,” said Natavudh. “We also have a total of six million users participating daily on our services. Over the past 18 months, around 550,000 people have been using Ookbee U tokens. These groups will be the first to adopt the SIX token.”

Vachara Aemavat, another co-founder and co-chief executive officer of Six Network, said that the company “uses blockchain technology and smart contracts to reinvent the digital economy by building infrastructure and an ecosystem with three main features: financial services, a digital asset wallet, and wallet-to-wallet commerce”.

To build the ecosystem, Vachara said Six Network launched the Blockchain Startup Fund with Bt500 million of investment. The funds will be invested in partners, business development and community development.

Separately, JVentures yesterday said it would launch digital currency trading in the secondary market on May 2. The firm also will come out digital loan services to support people at the grassroots level of the economy in the second quarter of this year.

Taro Lertwattanarak, chief executive of JVentures, a subsidiary of Jay Mart (JMart), said that the firm on February 14 launched an ICO of 100 million JFin Coins to more than 2,200 backers, known as supporters, with a market value of around Bt660 million. Each JFin Coin was valued at Bt6.60.

The company will distribute the 100 million JFin Coins to the supporters on April 2 and allow them to begin official trading in the coins via local secondary exchanges on May 2. The digital currency trading platforms involved are TDEX, Coin Asset, iCoin, BX Thailand, Cash2Coins and JibEx.

The company is awaiting the approval of an emergency decree on the matter from Bank of Thailand, which is expected to come soon.