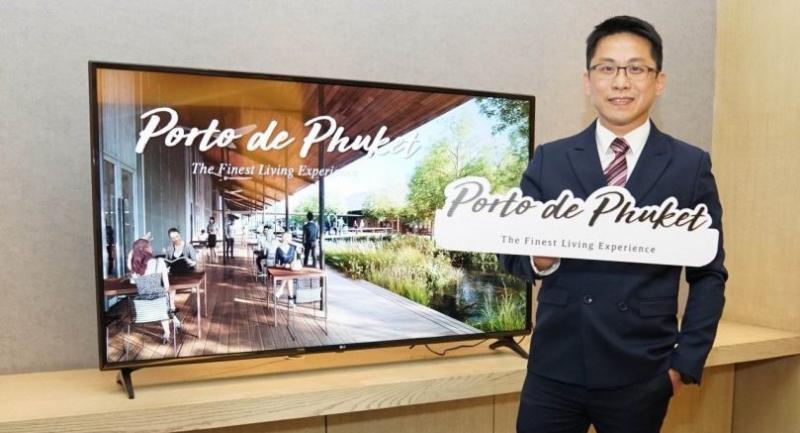 CENTRAL GROUP of Companies yesterday announced the launch of a new department store, Porto de Phuket, to cater to the increasing number of high-spending tourists visiting the area.

Scheduled to open in the fourth quarter of next year, the group said the department store would feature amenities like no other and cater to everyone’s lifestyle in an environment designed to be harmonious with nature.

Responding to the development of Phuket Smart City, Porto de Phuket will contribute to the city’s economic growth and will help promote Phuket to be the world’s top destination, the group said.

Lertvit Pumipitak, senior executive vice president for corporate business development at Central Group, said that the success of Central Phuket, which opened in September, revealed the potential of the tourist industry in Phuket.

“When we talk about types of consumers in Phuket, we can separate into local residents [including expatriates], and tourists, who play a major role in Phuket’s business. Also, each area has different characteristics.

“For example, in the city the target is the local residents and tourists, while in Patong the focus will be more on tourists who are young to middle-aged with probably a limited budget.

“Porto de Phuket is located in the Cherngtalay area where local and tourists have high spending power.

“Most of them are well-educated and pay attention to lifestyle. That is why we need to customise and specifically developed this concept to support this group of customers,” said Lertvit.

He added that the launch of Porto de Phuket will make Cherngtalay a new destination and this will directly support the community as well as people in the vicinity, and circulate more than Bt4.5 billion.

Lertvit said that the cost of living in a destination city like Phuket and Bangkok are pretty much the same for food and shopping. However, there is a major difference – the transportation cost in Phuket is much higher due to the lack of public transport.

The number of tourists visiting Phuket has increased every year. In 2017, Phuket had 16.9 million visitors, who contributed more than Bt377 billion to the economy.

It is forecast that in the next two to three years, the number of tourists may reach up to 20-25 million, generating more than Bt555 billion. Porto de Phuket will be developed under the concept “The Finest Living Experience”.

This will be the only department store that combines design, lifestyle and nature in a harmonious manner responding to the trend of the new generation to be one with nature. With an investment of more than Bt1 billion, it will cover 40,000 square metres, of which 12,000 square metres will be building area.

“We expect Porto de Phuket to accommodate at least 3 million shoppers every year, of which 40 per cent will be local residents and expatriates, and 60 per cent foreign tourists,” said Lertvit.

He said that visitors from abroad are divided into two segments: free and independent travellers such as Chinese, Koreans, Japanese and Singaporeans who have high purchasing power and seek premium amenities and are willing to pay for great experiences.

They will spend from five to seven days during the trip. The other group is western high spenders such as Russians, English and Americans. These tourists will spend a long period in Thailand.”

The store will consist of a cheese counter that offers more than 400 types of cheese from around the world, a grill bar, The Catch (a premium seafood store) and Central Wine Cellar with more than 400 wines.

Porto de Phuket will be situated in Cherngtalay district near Laguna Phuket, which is an area with the best resorts in Asia, luxurious apartments and villas. Hotels in the area have more than 12,000 rooms in total, there are more 5,000 apartment units and more than 2,000 villa units.

The area is a high demand residential area and Porto de Phuket will be the new destination for tourists of any generation to enjoy in a lovely green environment, the group said.