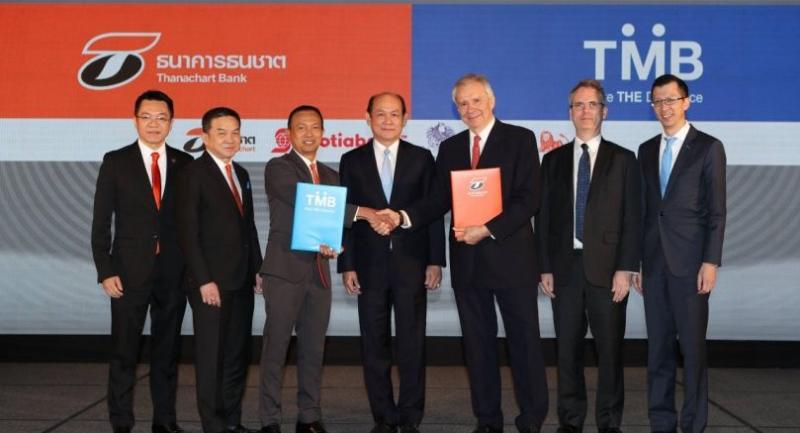 INVESTORS yesterday gave the thumbs-up to a proposed merger between TMB Bank (TMB) and Thanachart Bank (TBank), with share price gains reflecting the market’s confidence in a deal that will involve as much as Bt140 billion in financing.

A non-binding memorandum of understanding (MOU) was announced by the banks’ major shareholders and chief executives, in a TMB filing to the stock exchange on Tuesday. It follows a relaxation in regulations to ease barriers to consolidation in the sector.

The ministry had prepared some funds from its investment in the Vayupak Fund to finance the planned capital increase, meaning it would not need to draw on the national budget or from borrowings, Chumpol said.

As the major shareholder in TMB, the ministry considered the investment worthiness before giving its approval and believes the merger will strengthen the parties to it, he said.

“We're confident that the merger plan will find success, thanks to its perfection, appropriateness, clear synergies and higher competition. The merged bank will see greater stability,” Chumpol said.

TMB chief executive officer Piti Tantakasem said that with the signing of the MOU, both banks will start due diligence, looking deeply into the books of each party over the next two to three months as the process moves towards finalisation.

If the final outcome can be reached in line with the aims of the MOU, TMB will call for an extraordinary meeting of its shareholders to vote on the proposed capital increase.

The Ministry of Finance and ING Group – as holders of the major stakes in the bank - will lead the efforts for securing more funds under the capital increase plan.

The deal is expected to close late this year.

After the merger, the merged bank will have three major shareholders – ING Group, the Ministry of Finance and TCAP. The allocation of the stakes will be determined after the due diligence.

To facilitate the deal, TMB would need to raise between B130 billion and Bt140 billion. About 70 about of this amount would be raised via equity financing and the remainder via debt financing.

The total equity financing would be split into two amounts: the first block of Bt50 billion to Bt55 billion would come from newly issued TMB shares allocated to TCAP and the Bank of Novia Scotia. It is expected that the newly issued TMB shares will be issued at 1.1 times TMB’s latest available book value adjusted for the capital raise and a mechanism to be set out in the definitive agreements.

The remaining Bt40 billion to Bt45 billion of new equity would be raised by TMB from existing shareholders with the support of its current major shareholders and may also include a public offering and/or private placements to existing or new investors.

“After the due diligence, we will prepare the integrated plan to make it ready in both management needs and technologies before making adjustments to the branches to fit under the new brand,” Chumpol said.

Customers of both banks can use services as normal in the meantime.

Once merged, the new bank will have about 10 million customers, and would retain the lead in auto hire purchase loans, take fourth place in residential loans and be No 5 in loans for small and medium-sized enterprises. The number of customers using the merged entity’s mobile banking services will be 2-3 million. Its assets are expected to be sixth biggest in the banking industry, estimated at Bt1.9 trillion.

TMB executive chairman Philippe G.J.E.O. Damas said that adjustments under the naming of the merged bank may take months or a year to complete, and it will be business as usual for employees and customers. No decision has been made on who become the chief executive.

This deal is a merger of both banks and there is no winner and loser under the deal, Damas said.

TCAP executive chairman Suphadej Poonpipat said that TCAP will be a major shareholder in the new bank with a stake of over 20 per cent and TBank will undertake a business restructuring in order for its assets to approach the size of TMB's. TBank will divest its holdings in its subsidiaries, listed companies and non-listed companies.

“After this TCAP is ready to acquire TBank’s holdings in all subsidiaries to reduce TBank’s size and TCAP will remain listed on the stock exchange," Suphadej said.

Praphan Anupongongarch, chief executive officer and president of TBank, said that branch locations may be adjusted for better services and the employees, according to the business plan, will likely be re-skilled for digital services.

Somjate Moosirilert, chief executive officer of TCAP, said that this merger plan has been supported by both banks' shareholders and each party will complement the other.