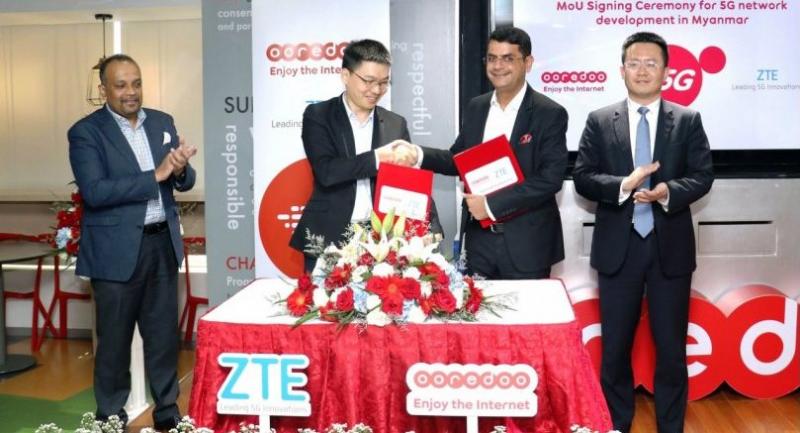 With growing interest for fifth-generation or 5G technology in Myanmar, Ooredoo Myanmar has recently taken another step forward to bring the latest development to the nation by signing an agreement with China’s ZTE Corporation, said the firm’s acting chief executive Alok Verma.

He told The Nation on Friday that the collaboration would ensure that the telco is ready to evolve to 5G, despite speculation that it will be tough for the four telecom operators in Myanmar to launch 5G services this year.

“Technically, we are ready for some upgrades and spectrum allocations. Plus we have ongoing discussions with PTD [Posts and Telecommunications Department] for 5G development in Myanmar,” he said.

“We will ensure that our network is ready for 5G technology while we’re waiting for government approval.”

According to Verma, the deal signed with ZTE Corporation on Wednesday is the first of its kind in Myanmar, helping the country realise its potential for leapfrogging in technological terms. The partnership would leverage the expertise of ZTE Corporation and support Ooredoo’s efforts to provide an excellent telecom infrastructure in Myanmar.

“We are the first in Myanmar to launch initiatives towards 5G development, recognising the potential of 5G, which will unlock the next generation of wireless technology with high speeds, ultra-low latency and greater capacities,” Verma said.

The development of 5G would unleash new possibilities in mobility, manufacturing, healthcare, transportation and several other industries, he added.

To kick off the partnership, Ooredoo Myanmar and ZTE Corporation will be considering potential test environments to deploy the telco’s 5G network. The test environments will be used to evaluate the performance of 5G network and technology to ensure that best-in-class service is achieved once the network is operational.

Verma said Ooredoo Group has been working towards bringing 5G technology to all the markets it operates in since 2014. It made history when it became the world’s first operator to launch a live 5G network in Qatar in May last year.

“Over the next few months, we have been planning to reach more world-firsts by testing 5G mobile and networks through user trials and commercial launches across the world, and Myanmar is no exception,” he said.

According to Verma, Ooredoo Myanmar has been building a strong cooperation with ZTE since 2014, and both companies are excited to move further together.

“Both parties believe that it will be a great opportunity to further strengthen our cooperation in the future, as we explore and discuss the path to 5G,” he said.

He added that the telco has chosen ZTE as its strategic partner due to the Chinese giant’s proven record in solid 5G cooperation with more than 40 operators worldwide.

“With the aim of keeping our business growing in the long run, ZTE will be the best partner to help us build the first 5G in Myanmar. We are confident that ZTE’s 5G end-to-end commercial products will support the full-band, full-scenario deployment needs,” he said.

Yet, Verma did not reveal how much the telco would invest in its efforts to bring 5G to Myanmar in the near future.

“We are still in discussions with PTD and we still don’t know about the costs yet,” he said.