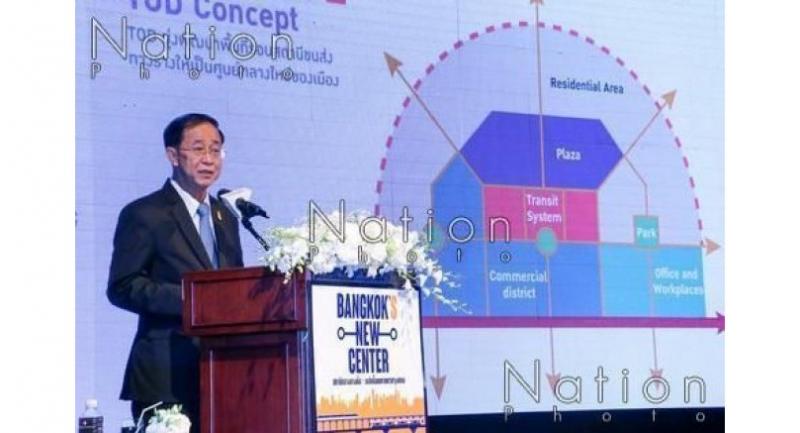 The funds from the private sector would flow into projects ranging from commercial buildings and a sports complex to an international exhibition centre and residential estates, the minister said of the ambitious plans for the 2,325-rai site.

"This figure excludes the government's investment to develop infrastructure at Bang Sue Grand Station worth more than Bt47 billion," Arkhom said on the sidelines of a seminar, Bang Sue Grand Station: Bangkok's New Centre, that was conducted by Krungthep Turakij – a sister newspaper of The Nation.

He told the seminar that the master plan to develop the station has the project split into three phases. The first phase entails the development of Bang Sue Grand Station and commercial and office buildings integrated with the transport system from 2017 to 2024. The second phase will develop a centre to serve the meetings, incentives, conferences and exhibition (MICE) sector, a sports complex, and retail, office and residential projects around the station from 2024 to 2029. Under the third phase, more housing projects will be built from 2029 to 2031. The master plan was drafted by Thailand's Transport Ministry and its Japanese advise.

Under the plan, Bang Sue Grand Station will become a new central business district (CBD) in Bangkok, alongside the Sukhumvit and Silom areas. The station will be a key link in Bangkok's mass transit system. It will serve existing rail systems such as BTS Skytrain, the MRT, and the Airport Rail Link as well as the 10 new rail systems to come and three high speed routes: Bangkok-Nong Kai, Bangkok-Chiang Mai, and the high speed service linking the Suvanabhumi, Don Muang, and U-Tapao international airports.

The project has seven zones that cover the 2,325 rai around Bang Sue district. Zone A covers 32 rai for a Smart Business Complex that will open for private sector bidding this year for its development.

The Transport Minister is negotiating with PTT Plc to develop a clean energy supply for electricity at the project. The project also will include the development of a telecommunication system to support the concept of a smart city, Arkhom said.

"The government has invested to develop infrastructure projects at the Bang Sue Grand station, as the commercial area that will be open for the private sector to bid for work under public-private partnerships (PPP),” Arkhom said. “The Smart Business Complex in Zone A will be the first project that will open for private-sector participation. We plan to set the terms of reference (TOR) in the next three months and invite bids in the last quarter of this year.”

In line with the master plan for Bang Sue Grand Station to become a new CBD, Sansiri Plc's chief operating officer Uthai Uthaisangsuk said at the seminar that if the project is completed as planned, that would provide opportunities for the private sector to expand investments around the location.

"Normally, when infrastructure construction kicks off, that boosts demand for residential properties around these developments and that spells opportunity for property developers to increase their investments in the area,” Uthai said.

Bang Sue has already attracted more residential projects launch in the area since construction began on the Purple Line in 2013.

Prices for land and homes around Bang Sue have increased on average by 13 per cent a year and 10 per cent, respectively, Uthai said.

According to survey by property agency Knight Frank (Thailand), at the end of the first quarter of 2018 launches of condominium projects in Bang Sue-Tao Poon have released 32,000 units, valued at about Bt100 billion. Up to 95 per cent of this stock has been sold.

Knight Frank (Thailand)'s managing director Phanom Kanjanathiemthao said, in an interview with The Nation before the start of the seminar, that condominium prices around Bang Sue have increased from an average of Bt95,000 per square metre in 2017 to Bt112,500 in the first quarter of this year - up 18.42 per cent. Land prices have risen from an average of Bt250,000 per square wah five years ago to Bt450,000 at the end of 2017 – soaring 80 per cent.

"We believe that if the Bang Sue Grand Station project proceeds in line with the master plan that this will drive strong demand for residential properties in this location,” Phanom said. “However, the government also has to develop a road system to link with the rail system. This is the way to drive Bang Sue to become a new CBD for Bangkok.”