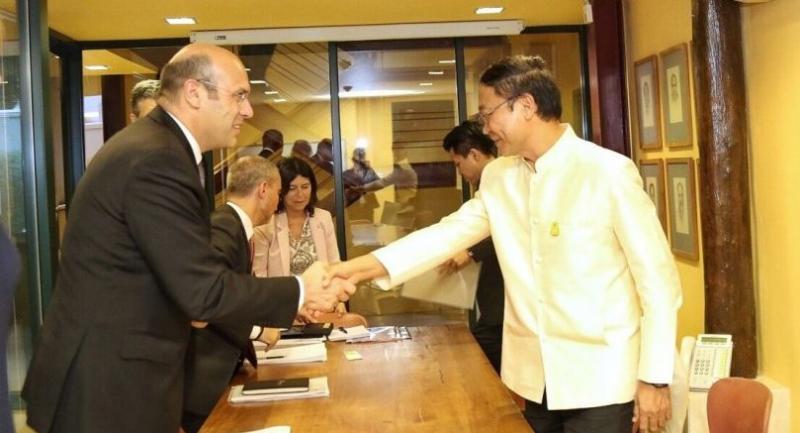 Pedro Siza Vieira, left, the visiting PM's Office minister of Portugal, shakes hands with Dr Pichet Durongkaveroj, the Thai digital economy and society minister during a meeting at the Portugese embassy in Bangkok.

PORTUGAL, a member of European Union, has stepped up its effort to attract Thai companies to invest in digital, renewable energy, tourism, food, and other sectors of its economy as the two countries celebrate their 500th anniversary of diplomatic relations this year.

The first Thai-Portugese friendship and trade treaty was signed in 1518 during the Ayutthaya period.

Pedro Siza Vieira, the visiting PM's Office minister of Portugal, said major Thai companies such as Minor Group, Indorama and Thai Union Group have already invested substantially in Portugal but newcomers are welcome to take advantage of the Portugese economy growth, which was nearly three per cent last year.

According to the minister, the Portugese economy has fully recovered from its previous crisis.

So far, Minor Group has invested 400 million euro in a hotel chain in Portugal    , while Indorama's investment in the petrochemical industry is worth about 150 million euro.

The minister said Portugal has a liberal economic and investment policy offering tax and other incentives to foreign investors as well as the right to own their business and property 100 per cent. The country is seen as a competitive platform for Thai firms to tap the vast EU market of 28 countries as well as to reach more than 300 million Portugese-speaking consumers in South America and Africa.

Automobile, IT, energy, real estate, hotel and tourism, food and beverage as well as petrochemical are among the sectors being promoted by the Portugese government while Portugese companies are also interested in tapping Thailand as a platform to enter the Asean market.

The minister said a delegation of software, cyber-security and digital tech companies will visit Thailand shortly as Portugal joins hands with the Thai Ministry of Digital Economy and Society to boost bilateral cooperation.

Dr Pichet Durongkaveroj, the digital economy and society minister, also held a meeting with Vieira to exchange opinions on development of digital government and tech start-ups in the two countries. Regarding the Thai government's Pracharat village internet project, the Portugese minister said it is an important infrastructure to implement the digital government policy and help reduce economic inequalities.

In addition, both countries hope to work closely to promote the software and digital tech sectors while Portugese firms are invited to visit a new industrial and digital innovation zone at Thailand's Eastern Economic Corridor (EEC) project, which covers parts of Chonburi, Rayong and Chaserngsao.