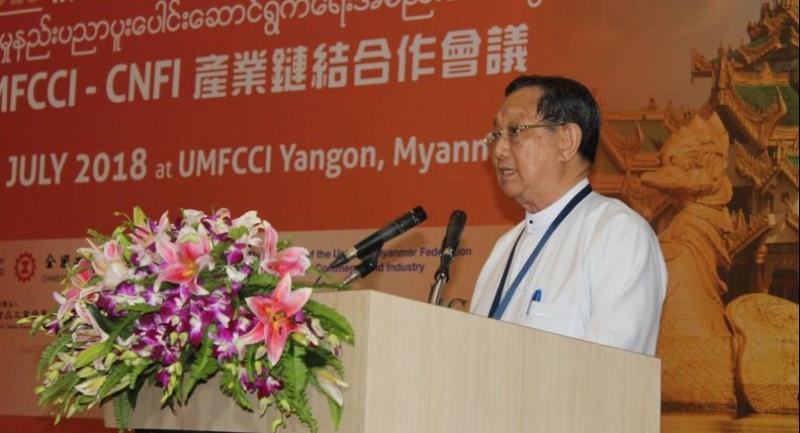 MYANMAR’S potential to become a regional investment hub would be realised only if the government manages to address major challenges businesses are facing in the nation, a banking expert has warned.

“The biggest challenge Myanmar is facing today is the Rakhine crisis, for which some foreign investors from western countries tend to adopt a wait and see attitude and a drop in visitor arrivals is obvious,” he told a seminar on Myanmar’s industrial collaboration opportunities last week.

“Revenue mobilisation tends to decline due to much needed tax incentives to revive stagnation in the economy. The much debated Tax Amnesty law is still pending.”

According to the banker, Myanmar’s investor-friendly laws remain inadequate, particularly laws related to intellectual property that are still waiting for the Parliament’s approval after years of debate and revisions. Local banks are still unable to leapfrog, though the new regulations imposed by CBM are destined to reach international standards and best practices.

He said Myanmar’s industrial sector is constrained by availability of capital, capacity and technology.

“Industries in Myanmar are generally described as ageing and inefficient because most of them still use out of date technology, although some modernised plants came into operations with foreign assistance,” he said.

“Myanmar’s industries are still in an infant stage of development, which itself will provide extensive opportunities for foreign investors.”

He said Myanmar workers usually possess high IQ levels, which helps reduce training time to transform them into a skilled workforce. He cited positive examples in the garment sector.

Than Lwin believes Myanmar offers an excellent ground for foreign investments in agro-based industries, as it was once hailed as a granary of Asia and the world’s largest rice exporter.

Given a huge potential of mineral resources, most of which are still untapped, Myanmar is in a better position to establish resource based industries, he said. The banker urged that a modern industrial base be established using the latest state of the art technology.

Industrial reforms in Germany in the 1990s and the growth of Taiwan’s SMEs sector in the 1950s and 1960s with support of the World Bank set good examples for Myanmar, he said.

“In a survey conducted by West Germany in the process of German unification in 1990, 90 per cent of East German industries were using out of date technology and were later scrapped. So Germans began to build state of the art industries and in 10 years, the eastern part of Germany became the most modernised industrial area in Europe. Today, though President Trump sets measures for tariff protection, German industrial goods are still competitive and in high demand in the United States,” he said.

The banker is confident that Myanmar will manage to revive the development of small and medium enterprises with assistance from Asian investors. Myanmar’s SMEs at this juncture are still small in size and scope – barely numbering 100,000 compared to nearly 2.7 million SMEs in Thailand.

Despite the decline in the revenue of Myanmar’s services sector and the slowdown in FDI inflows driven by the Rakhine crisis, Than Lwin expects the fallout to be short-lived. He hopes for investors satisfaction over adequate incentives provided through the new Foreign Investment Law, the new company law taking effect from August 1, and the new Condominium Law providing ownership rights to foreigners.

“Despite the handicaps, banks in Myanmar are transforming rapidly, adding far-reaching products for their expanding customers. As the smartphone penetration rate is fast approaching about 90 per cent of the population, Myanmar banks now try to take advantage by adding more fintech products, and are moving towards agent banking on a wider basis to reach mass market,” he said.

He believes Myanmar’s financial sector is moving towards a sound and efficient financial system to ensure inclusive growth across the nation.

Since fiscal year 2013-14, Myanmar has managed to sustain strong economic growth with gross domestic product growing on average at 7 per cent per annum over the past five years – except for FY2015-16 when growth subsided to 5.9 per cent due to policy uncertainty with the change of government.

On the fiscal front, implementing the new Myanmar Sustainable Development Plan has been fairly successful in breaking the circle of low revenue and low public spending in the past.

“With a latecomer advantage, Myanmar has the opportunity to learn from the experiences and mistakes of other countries with a view to leapfrog the economy,” Than Lwin concluded.