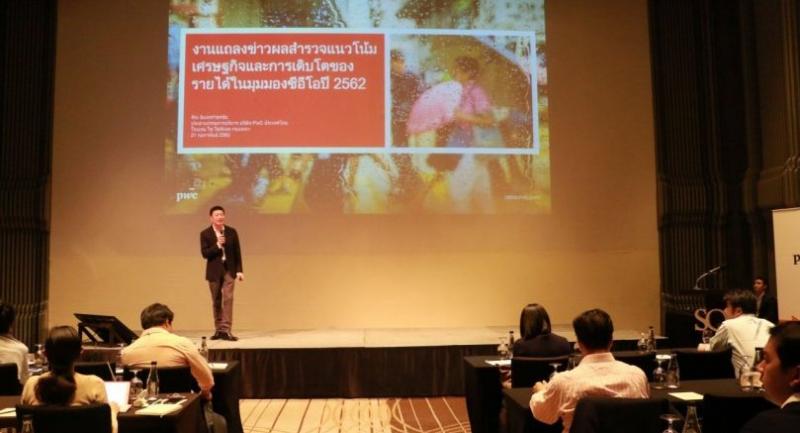 NEARLY HALF of chief executive officers in the Association of Southeast Asian Nations (Asean ) expected a decline in global economic growth in 2019, according to PwC’s 22nd Annual Global CEO Survey.

The PwC survey of 1,378 CEOs across 91 countries, included 78 CEOs from Asean. The survey was conducted between September and October 2018.

The survey was already revealed in the World Economic Forum Annual Meeting in Davos last month. It was revealed in Thailand yesterday with the focus on Asean CEOs views.

Nearly half of Asean CEOs, or 46 per cent, surveyed between September and October 2018, believe global economic growth will decline this year. That’s up from 10 per cent in last year’s survey – a record jump in pessimism.

Still, all is not doom and gloom: 42 per cent of global CEOs still see an improved economic outlook, though this is down from a high of 57 per cent in 2018.

“On top of this, we found that Asean CEOs are even more pessimistic than their global peers. This is the opposite of what we’ve seen in the past, as CEOs in this region are usually quite optimistic.”

Asean CEOs ranked trade conflicts as the biggest threat to their organisation’s growth prospects at 83 per cent. That was followed by geopolitical uncertainty at 81 per cent, policy uncertainty at 78 per cent, over-regulation at 77 per cent and global economic volatility at 73 per cent, the PwC Survey showed.

Lingering trade concerns between the US and China have prompted a majority of CEOs in Asean to adjust their supply chain and sourcing strategy (29 per cent) and delay capital expenditure (29 per cent). Some 17 per cent are shifting their growth strategy to alternative markets such as Indonesia and Vietnam.

The unease about global economic growth has also hit confidence among CEOs about their company’s revenue outlook in the short term. Only 33 per cent of Asean CEOs said they’re “very confident” about their organisation’s growth prospects this year, down from 44 per cent previously. In the medium term, just 39 per cent believe their revenue will increase over the next three years, down from 53 per cent a year ago.

In the new data-driven world, 82 per cent of Asean CEOs are concerned about availability of key skills, primarily digital skills that are hard to find and in high demand. That’s followed by cyber threats (81 per cent) and speed of technological change (72 per cent).

“The availability of key skills is a huge problem for Asean,” Sira said. “With a lack of skilled talent, businesses are going to miss out on lots of opportunities: competitive advantages, product and service development and market expansion.”

Asean CEOs are aware of the impact of Artificial intelligence (AI) on business operations, Sira said. In fact, 87 per cent of Asean CEOs expect AI will dramatically change their business over the next five years, and 72 per cent say it will have an even larger impact on the world than the internet revolution.

Still, 36 per cent of Asean CEOs currently have no plans to pursue AI. While 32 per cent have plans to do so in the next three years, another 28 per cent have already adopted AI but at a limited scope and just 4 per cent have included and implemented AI on a wider scale.

One of the reasons why a vast majority of CEOs are still reluctant to adopt AI is partly because they struggle with closing the skills gap, Sira said. “They can’t find enough workers with the skills and capability to work with AI-based technology.”

He suggested that in an age where robotics and automation are disrupting the way businesses operate, all need to constantly retrain and upskill workforces with digital knowledge, as well as data analytical and reasoning capabilities.