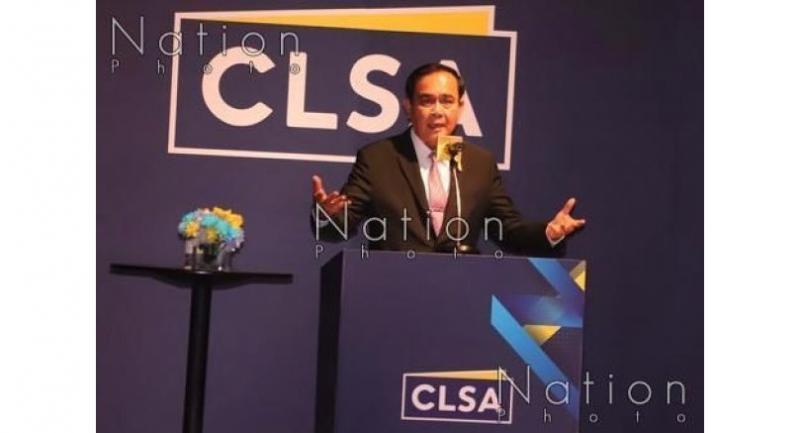 PRIME MINISTER Prayut Chan-o-cha yesterday shared his proposals for plans and projects that he says would boost investor confidence, including a promise that as the Asian chair this year, the country would drive expansion of the Asean economy to become one of the world’s four largest economic groupings.

Speaking to a seminar held by CLSA Securities (Thailand), Prayut said this was an important year for Thailand. As the Asean chair, it could cooperate with other Asean countries for mutual gain and eventually grow the regional economy to the fourth largest world grouping.

Prayut said he expects to finalise the Regional Comprehensive Economic Partnership (RCEP) soon. Thailand is also interested in being a member of Comprehensive and Progressive Agreement for Trans-Pacific Partnership (CPTPP) and other important economic alliances, he said.

Asean will see more connectivity through trade, investment and tourism, along with cooperation in innovation, industrial reform and labour skill development. The Digital Asean concept will also be promoted for technological advancement, higher regional competitiveness and cyber safety, he said.

“The global situation is constantly changing and countries need to partner. Thailand can be an answer for foreign investors as the country is situated in the centre of Asean with a large potential market,” he said.

The Thai government supports infrastructure projects, aiming to consolidate Thailand as a key economic corridor within Asia, he said. In the initial period the government has pushed for special economic zones, particularly the Eastern Economic Corridor (EEC), as the region’s trade and investment centre.

In response to a question on the long-term EEC development, Prayut said the government had set an ongoing budget for this project and put it into the 20-year national strategic plan along with the EEC bill and the EEC Office. Foreign investors feel reassured with the planned Digital Park Thailand (EECd) and Eastern Economic Corridor of Innovation (EECi) which will also have continued budget and project assessment on a five-yearly basis.

He said Thailand’s competitiveness will be enhanced through three concepts: extension from the past – the economic roots, identity, culture, tradition, living style and diverse natural resources, along with technology and innovations; adjustment in the present through transportation networks, scientific, technological and digital infrastructure, along with environmental improvement for future industrial and service development; and build-up of new value in the future via increased capacity of business operators, development of new-generation people, along with business remodelling to match market demand amidst rapidly-changing technologies, he said.

“The private sector will come as a strength to develop Asean, aiming to narrow gaps and grow together for long-term development,” Prayut said.