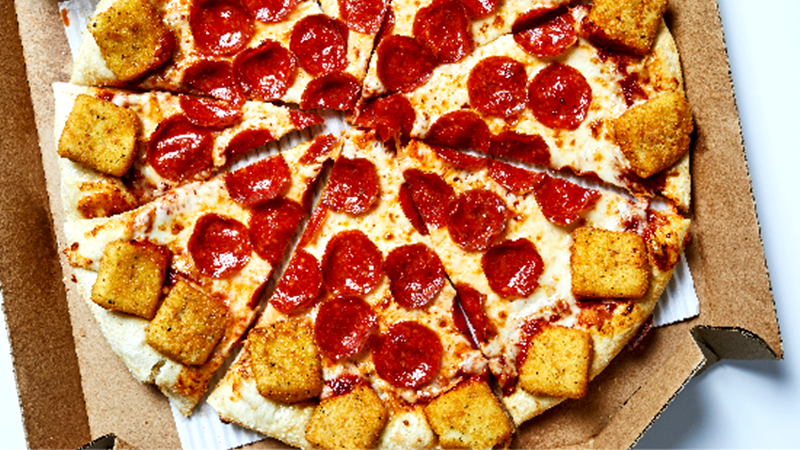 This is the state of fast food today: We are putting hats on hats on top of bicycles. We are gilding lilies to the point that they resemble bloated, glitzy hippopotami.

We are running out of portmanteau.

In our journey to the land of Over the Top, the latest stop is Pizza Hut, where the new limited-edition pie is not content merely to be a pizza. No, this disc of dough dreams bigger - it's also the delivery system for something that the chain is calling "mozzarella poppers." Before we dive into how we're being asked (allowed?) to eat chunks of fried cheese on top of the same cheese, in melted form, can we get something out of the way first? Guys, I think Pizza Hut is trying to sneak something by us here. I don't think there is actually an existing snack called a mozzarella popper.

Since the dawn of the deep fryer, there have been jalapeño poppers, and there have been mozzarella sticks. Mozzarella poppers? Never heard of one! But Pizza Hut just introduced them like we are supposed to be familiar with this foodstuff. It's as if you are at a party and your friend introduces you to some guy named Chris you've never met and also gives you no context clues. No "this is my colleague Chris" or "this is Chris, from book club." Which is confusing, right? So who is Chris and what is a mozzarella popper, Pizza Hut?

I mean, it doesn't take long to get the gist - they (the poppers) appear to be squattier, square versions of mozzarella sticks affixed to the crust of the pizza.

But do these alleged snacks add anything to the pizza party? Not really. In fact, they are disappointingly soft, which could be because their breaded exterior crust has been steamed into squishiness by the hot pie beneath them. It seemed to me that there were two equally problematic ways to eat them. The first method is to pluck them off and dunk them into the accompanying marinara sauce. (This method, though, merely means that you're getting pizza and mozzarella poppers, not the transformative pizzandmozzarellapoppers combo that was promised.)

The other technique is to eat the slice up to the crust, then fold the remaining edge around the fried cheese. But there's an issue here: unless you are eating this solo, it's kind of gross to dip something that's already been in your mouth into a communal tub of sauce. And you want to dunk them in the sauce, I promise, because without it, the cheese is very bland. If someone has figured out another way to consume this beast, please let me know.

The questions the Hut's new product raises aren't just mechanical. They are existential, too, as in "how the heck did we get here?" Here being a place where news of this unholy chimera of a pizza is greeted with glee.

"THIS LOOKS AMAZING AND I NEED IT! I think I found my first meal after I get my appetite back and kick the flu! @pizzahutwith the Mozzarella Poppers Pizza for the win!!"

But it all makes sense if you consider the parade of food mash-ups that have come before it, including from Pizza Hut itself, which has previously stuffed its crust with cheese, garlic knots and hot dogs (really). It created something called the Stuffed Cheez-It Pizza, which resembles an oversize version of the snack cracker with a pizza jammed inside of it - or a safety-orange flotation device.

Recall the Doritos Locos taco, where within the Dr. Frankensteinian labs of Taco Bell, taco scientists created a shell made from everyone's favorite orange-dust-leaving snack chips. The taco chain also gave the world tacos whose exteriors were made of biscuits and waffles, respectively, and it stuffed Fritos inside burritos. McDonalds created a breakfast sandwich that swapped blueberry pancakes for bread.

Various other things have been pressed into service as burger and sandwich buns, such as ramen noodles, glazed doughnuts and waffles. KFC's Double Down famously employed fried chicken patties in bread's stead.

There are sushi burritos.

Among Instagrammable breakfast mash-ups, first there was the Cronut (a croissant crossbred with a doughnut), followed by croiffles and cragels, bronuts (brownies meets doughnuts) and doissants (which are Cronuts by another name). Pinterest is a breeding ground for this scourge, home to recipes for cheesecakeadillos, ravioli nachos and pasta doughnuts.

But I have a confession to make. I am no innocent in this war against simplicity. There is blood - er, make that queso - on my hands: every year, my Super Bowl spread includes something called toffles, which is a bag of frozen tater tots shoved into a waffle iron and browned to crispness. And is combining these two formerly unrelated foods enough for me? No, it is not.

I sometimes top my toffles like nachos - which makes them . . . tofflos and me part of the problem.