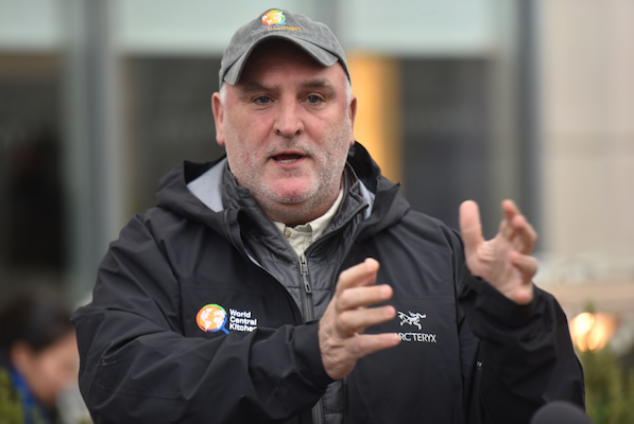 From New York to California, governments have told restaurant operators to shutdown their dining rooms to prevent to spread of the coronavirus.

The orders have placed an untold number of workers on the unemployment line and cut off the primary source of revenue for restaurants. Now individuals, companies and nonprofit groups are trying to fill in the gaps and assist the crippled hospitality industry - by buying gift cards, setting up virtual tip jars, handing out groceries to the unemployed and other acts of charity.

But one high-profile member of the industry says it won't be enough, not by a long shot.

"Charity can't deal with something this big," said Tom Colicchio, the chef, restaurateur, activist and "Top Chef" head judge. "This [demands] government intervention." Without it, and possibly even with it, 75% or more of the restaurants in America could be history, he predicted.

Colicchio's request for government intervention is being echoed around the country by other chefs and restaurateurs who have either closed establishments or reduced them to carryouts and/or delivery operations. Dozens of chefs - including such high-profile names as Stephanie Izard, J.J. Johnson, Preeti Mistry, Alon Shaya and Patrick O'Connell, the three-Michelin-starred chef behind the Inn at Little Washington - have signed a Change.org petition, asking government officials to "come to a swift plan for how you can meaningfully give your local restaurants the best chance for survival."

And on Wednesday, Danny Meyer, the influential New York restaurateur, announced that because of the effects of the coronavirus shutdown, he is laying off 80% of his staff at Union Square Hospitality Group, approximately 2,000 people in both the restaurants and home office. Meyer said he has forfeited his salary "immediately and indefinitely" and that every executive in the company will take a "significant pay cut." USHG will funnel the money from those pay cuts - plus revenue generated with gift cards - into an employee relief fund to help workers in the weeks ahead, as the pandemic continues to devastate the industry.

Meyer said in a statement that part of the reason for the layoffs is so employees can file for unemployment benefits. The state of New York is waiving the standard seven-day waiting period for workers to file.

Like Colicchio, Meyer said stop-gap measures and the kindness of strangers will not be enough.

"We cannot depend simply on the generosity of our community alone," Meyer said in the statement. "If ever there were a time to call on the government to provide enlightened leadership, it is now. Our employees need that support to sustain their livelihoods while waiting for our restaurants to reopen. I am calling on our city, state, and federal leadership to step in with a full emergency relief package for restaurant and bar workers, and I pledge my immediate service - on behalf of, and along with other industry leaders - to help come up with economic solutions that work for all."

On Tuesday morning, President Donald Trump did take part in a conference call with representatives of the restaurant industry, but they were all executives with national and international chains, including Domino's Pizza, Subway, McDonald's, Papa John's and others. No independent restaurateur was invited to the call, which immediately caused panic among those who own and operate such establishments, which represent an estimated 70% of the restaurants in the United States.

According to a CNBC report, one chain executive urged the federal government to take action and support small businesses so they could remain afloat during the pandemic. "I think you're really going to like what we're doing," Trump responded, according to an anonymous source in the CNBC story. The White House is working on an emergency stimulus package that would devote $300 billion to small businesses.

It's not clear how such money would help the restaurant industry, if at all. Restaurants, after all, are suffering now. Their sales are down 50% or more in the weeks since the coronavirus started to spread across the United States, and they didn't have much cushion to begin with. Restaurants typically operate on very narrow profit margins. Vox reviewed data from OpenTable, the reservation platform used widely across the country, to show that restaurants are seating far fewer diners this year compared with last year. Restaurants in three cities (Boston, New York and Seattle) have seen a drop of more than 60%.

Any federal money would have to be administered, said Colicchio, and each restaurant would have to apply and prove itself worthy of the cash. "It's going to be a process to get that money," he said.

Some jurisdictions, such as Washington, have already passed emergency legislation to help small business. Washington's temporary law extends unemployment benefits to those out of work because of the virus, prohibits both residential and commercial evictions and delays retail tax payments to the city.

The organizers of the Change.org petition want more: They would like to see the government waive payroll taxes and set aside zoning restrictions "to allow restaurants to temporarily use their spaces as boutique food and beverage markets, offering an alternative to overcrowded supermarkets." Colicchio said he's even looking to his insurance company for help: Policies often cover losses because of physical property damage that interrupts business.

"A virus is physical," he said.

Colicchio's search for solutions indicates just how frustrated, and desperate, restaurateurs have become in a very short amount of time. The government has largely shut them down in the name of public health, and now restaurant owners want to make sure the same government cares about their fiscal health, too.

"The restaurant community is going to have a very bad time," said restaurateur José Andrés at a news conference Tuesday, announcing his new community kitchens. "If the cities and the governors are saying that the restaurant industry has to shut down, I think government has to be putting some of the responsibility forward and take care of those employees."

Both Andrés and Colicchio says independent restaurateurs don't have the kind of cash reserves to pay employees long-term with no money coming in.

"I don't care who you are, you don't have the wherewithal to survive this and open up," Colicchio said. "Let's just say, if there's a restaurant group that has 15 or 16 restaurants, I'd be surprised if all of them open up. Even large groups aren't going to get through this unscathed."

Which is why Colicchio is so pessimistic: "I suspect 75 or 80% of the restaurants won't reopen," he said.

The hospitality landscape could be dramatically altered by the time diners feel safe again to return to restaurants. Depending on how governments step up to assist, restaurant owners will be immediately behind the eight ball when they open their doors again, Colicchio said. Landlords will want back rent, suppliers will want back payments and governments will want back taxes. And even when restaurants inevitably reopen, they won't be profitable for awhile.

"It's more of a mess than you can possibly imagine," he said.