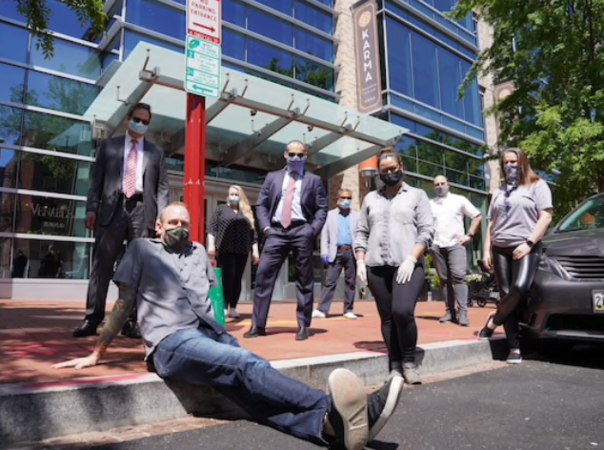 This month, the proprietors of more than 10 restaurants, bars and bakeries in Washington, including the Michelin-starred Gravitas and Pineapple and Pearls, sued their shared insurance company, joining a growing list of restaurateurs who are seeking relief from an industry they thought would protect them from any unpredictable event, including a pandemic of historic proportions.

The owners are pressing carriers to honor business-interruption policies during an outbreak that has wreaked so much financial havoc that it could bankrupt insurance companies and put at risk claims not related to covid-19. One side has few cash reserves and a trickle of revenue from takeout and delivery. The other side has an $800 billion surplus that, despite its size, could vanish in a matter of months, insurers say, if they start paying out these claims.

Both industries say they're fighting for survival.

"I want to be there for my customers," says Tiffany MacIsaac, pastry chef and owner of Buttercream Bakeshop, one of the plaintiffs in the D.C. complaint. "But if I could avoid doing that and just be home and know that I was safe, I mean it's kind of a no-brainer because all of the rent and everything would be covered by the interruption insurance."

After governments shut down dining rooms, restaurants large and small started taking their insurance cases to the courthouse: Boston-based Legal Sea Foods sued Strathmore Insurance Co. The owners of Musso and Frank, the century-old Los Angeles institution, sued Mitsui Sumitomo Insurance. A Houston restaurant company sued Scottsdale Insurance Co. Some complaints seek class-action status. Others have been filed by a single operator, such as Thomas Keller, the mastermind behind the three-star Michelin restaurants Per Se in New York and the French Laundry in California, who sued Hartford Fire Insurance Co.

These operators' claims have usually been denied for one of two reasons: The policy specifically excluded viruses or the property had not suffered any physical damage, like after a flood, hurricane or other natural disaster. Attorneys for the restaurants don't think the denials are as clear as the carriers say, especially with all-risk policies, those with limited coverage for viruses (like Keller's) or those that cover "civil authority" actions such as when a city, county or state shuts down in-person dining.

Davis and David Feinberg are attorneys for Venable, the high-powered firm representing the D.C. restaurants suing Erie Insurance Exchange, the Pennsylvania-based carrier that customizes policies for the hospitality industry. The lawyers say the policies have broader business-interruption coverage than many. For starters, they say, the policies don't feature a virus exclusion, which was widely adopted by carriers after the SARS outbreak in 2003. But, they add, the policies also provide income protection and other payouts for business interruptions caused by "direct and accidental loss of or damage to covered property."

"Or" is the operative word, says Davis.

"So you could have loss or damage," the attorney says. "If you drop your iPhone and smash it on the floor and it's cracked in half, yeah, it's damaged. But if you leave it in an Uber, it's lost. And that's what's happened to our restaurants: We've lost the ability to use them, because it's illegal under the government orders."

A spokesman for Erie says the company does not comment on pending litigation.

Historically, business-interruption coverage has been "tied to the physical loss of the property," says Michael Menapace, an insurance lawyer and a "nonresident scholar" for the Insurance Information Institute, an industry association. Over the years, policyholders have sued to try to loosen the definition of physical damage. The most pertinent case, Menapace says, is SourceFood Technology v. U.S. Fidelity and Guaranty, in which a Minnesota wholesaler sued its carrier for denying a business-interruption claim after the Agriculture Department prohibited some imports from Canada during the mad-cow crisis of 2003. The USDA order had cut off the wholesaler's Canadian source for processed beef tallow, which adversely impacted its business. A federal appeals court rejected Source Food's claim, saying there was no evidence of physical damage to property due to the government intervention.

Most restaurants are not claiming physical damages, Menapace adds. They're arguing that their policies are broad enough, or don't include a virus exclusion, so they should be covered under business interruption. "I've not seen any cases filed so far," Menapace says, "where somebody has said we went through and tested our property and it was positive for covid-19. That might be a very different claim."

John Houghtaling, the attorney representing Keller, said he plans to poke holes in physical-damage demands. The pandemic has meant any enclosed building is a dangerous space, he says, regardless of whether there is physical damage.

So much is riding on these lawsuits - the survival of restaurants and employees; the survival of the insurance industry and the ability of its customers to make other claims - that both sides expect lawyers to parse every clause in the policies and dig up every relevant case.

"It will not be resolved soon," says Menapace.

Federal and state lawmakers are also getting involved. Legislators in several states have introduced bills that would require carriers to pay business-interruption claims for small companies that have experienced covid-19 related losses or have been ordered closed. Notably, the bills could demand such payouts even if policies excluded viruses or required physical damage. Similar bills have been introduced in the House of Representatives, including one that would have the federal government cover excessive losses in the insurance sector. The Treasury Department recently weighed in on the matter in a letter to Capitol Hill suggesting the proposals "fundamentally conflict with the contractual nature of insurance obligations and could introduce stability risks to the industry."

Legislative attempts to require insurance carriers to retroactively pay business -interruption claims will face challenges under the contracts clause of the Constitution, say Menapace and others. But more than that, they could push the insurance industry into insolvency, says Sean Kevelighan, chief executive of the Insurance Information Institute.

The insurance business works by spreading risk around so the industry isn't hit all at once with claims, says Kevelighan. A pandemic disrupts business far and wide, with no end date in sight. About 40% of all companies have business-interruption insurance, Kevelighan says. If lawmakers require carriers to pay these claims, it could cost the insurance industry $150 billion a month, which would quickly deplete its $800 billion surplus, he says.

"In a matter of months, you're putting systemic pressure on the industry and you're beginning to look at bankruptcies," says Kevelighan. What's more, he adds, policyholders with claims for auto accidents, hurricane damage, flooding and the like might end up empty-handed.

But attorneys for the restaurants say the insurance industry is ignoring the fact that carriers have reinsurance to protect them from severe events. "They don't have to use their cash reserves, necessarily," says Houghtaling, the attorney who represents Keller.

If the future is uncertain for these court cases, it's even worse for the restaurants and bakeries behind the complaints. The owners are trying to stay afloat while earning small fractions of their past revenue, trying to keep employees on the payroll or on health insurance (or both), trying to figure out whether to use Paycheck Protection Program money (which converts to a loan if not used properly), trying to figure out if there will be enough business to hire more staff as cities and restaurants begin to open up again, and trying to understand how they paid all this money in insurance premiums, only to see nothing from it.

"We're talking about not just the restaurant profession," says Keller, the man behind Per Se and the French Laundry. "We're talking about anybody who has business-interruption insurance being threatened to close their business because the insurance companies aren't willing to abide by their policies. Morally, it's shameful. It just is. When you get down to it, it's all about the money."

Then he pauses and adds: "This should be our primary goal: to save businesses and save jobs."