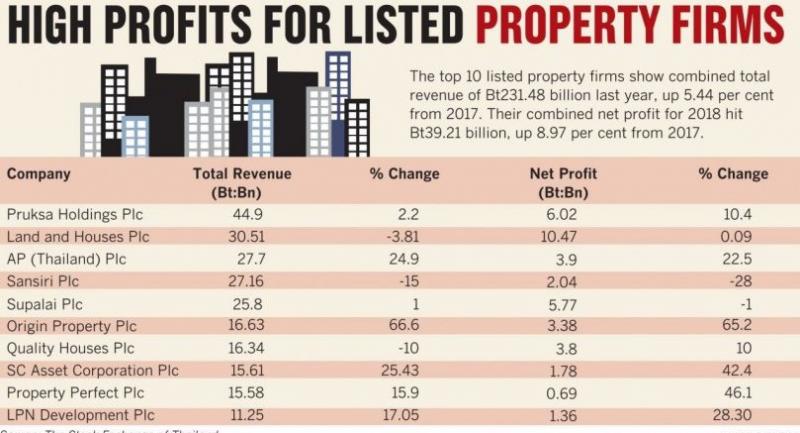 AN EXPANDING economy helped to boost profits for most of the country’s biggest property companies, with the top 10 listed developers posting an 8.97 per cent rise in combined 2018 net earnings from the prior year to Bt39.21 billion.

With growth in gross domestic product topping 4 per cent in 2018, the improved mood in the market also saw sales at most of the companies climb, reaching a combined revenue of Bt231.48 billion, up 5.44 per cent from 2017. Supalai Plc’s total 2018 revenue was higher than in 2017, but its net profit dropped.

When the figures are combined for the top 10 listed property firms, the 2018 financial results are stronger than in 2017 for both revenue and net profit.

AP (Thailand) Plc experienced high growth in both total revenue and net profit. It expects both measurements to remain strong this year. The developer predicts growth based on plans to launch 39 residential projects worth Bt56.8 billion this year, the company’s chief for corporate strategy and creation, Vittakarn Chandavimol, told a press conference yesterday.

Asia Plus Securities Co Ltd’s vice president, Terdsak Taweethiratham, pointed to the property sector’s revenue and net profit growth last year. He noted that for the last quarter buyers came in amid concerns about a new Bank of Thailand (BOT) measure to increase loan down payments from the current 10 per cent, to 20 and 30 per cent for second and third homes.

He said the signals were there for a drop in the property sector after the BOT’s measure comes into effect on April 1.