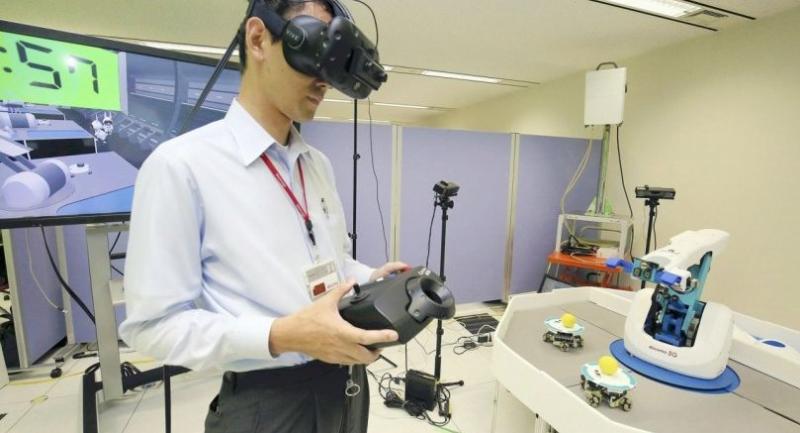 With an aim to start services by 2020 — when the Tokyo Olympics and Paralympics will be held — development of a new communication method called the fifth-generation mobile communication technology (5G) is picking up speed.

With technology that provides a 100-times-faster communication speed than the current mainstream technology used for smartphones and the like, it holds the potential to significantly change the way we live and work, and international competition is intensifying.

As soon as a Yomiuri reporter donned a goggle-type display headset, the scene of a robot factory spread out before my eyes. When I operated the remote control in my hand, a robot arm in the factory moved at the same time, and the reporter was able to move parts to their designated locations. It looks just like a crane game at a game center, but since the display lets you observe the scene from directly above or from the sides, grasping the parts was easy.

What the reporter experienced was using remote control via 5G developed by NTT Docomo Inc., and what I was watching on the display was a virtual reality image.

Images taken with the four cameras surrounding the arm are sent to the display and synthesised by a computer. It is a system that allows you to see images from any angle you like. When you move the remote control, the image and the arm move in the same way, so operating the arm that actually exists is not too difficult.

This is possible thanks to 5G technology. With conventional communication methods, it is difficult to smoothly transmit data-heavy videos necessary for remote operation.

From a distant location, a time lag occurs between the remote control operation and the movement of the arm, so precise operation is impossible.

At 100 times faster communication speed and with 1,000 times more communication capacity than the current mainstream method, called Long Term Evolution (LTE), 5G means it only takes a few seconds to download a two-hour movie to a smartphone.

“It isn’t a dream to operate heavy machinery and do construction work around the Kanto region while in a Tokyo office,” said Atsushi Harada of the Docomo 5G promotion office.

A focus on service

It can also connect a large number of devices to the internet at the same time, with 1 million units per square kilometer. Even if you find yourself in a stadium filled with tens of thousands of soccer fans, all of whom are using their own devices, it will not be difficult to connect to the internet to check footage such as a goal shot.

You can also enjoy match videos from any angle on a smartphone — even from a player’s point of view on the field, which can be rapidly generated by combining various camera angles.

It is also expected to prove useful with automated driving. In the not-too-distant future when autonomous cars are put to practical use, it is presumed data will be exchanged among vehicles and between vehicles and signals at intersections, and that braking and other maneuvers will occur accordingly. The ability of 5G technology to provide instant communication between the devices is indispensable.

However, with 5G, the emphasis is placed on what services can be offered beyond technological development. If new services can be pioneered and revenue commensurate with investment can be generated, capital investment will increase.

British research firm IHS Markit and others estimate the scale of services generated by 5G will reach up to US$12.3 trillion (about ¥1.4 quadrillion) worldwide in 2035.

“It is necessary that the telecommunications industry will involve different industries, and draw up earnings models for 5G as soon as possible,” said Yosuke Ito of the Mitsubishi Research Institute Inc.

Ideas that connect such new technology to enrich our lives must be found.