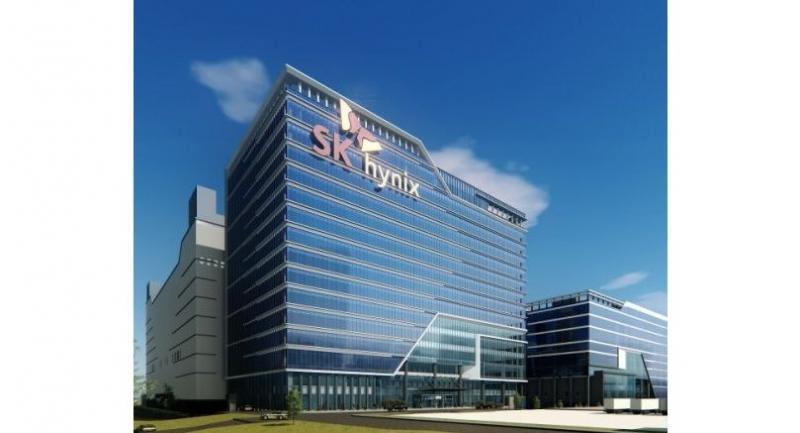 SEOUL - SK hynix Inc. said Thursday it will build a new research and development center with an investment of $174 million.

South Korean memory chipmaker SK hynix announced Thursday it will invest more than 200 billion won to build a research and development center for its emerging cash cow NAND in the company’s headquarters in Icheon, Gyeonggi Province.

When completed in September 2019, dispersed R&D crews across the Icheon campus will move in to the new center, including researchers and developers of the company’s flagship 3-D NAND chips and future technologies.

The new R&D center will break ground next month on about 90,000 square meters of land to raise a 15-story building above the ground with five basement floors for accommodation for a workforce of around 4,000.

The center will be in the vicinity of the SUPEX Center and R3 buildings, where DRAM developers are located, hoping the proximity to help increase communication between two the two major businesses and create synergy, the company said.

With the latest investment decision, SK hynix seems to be focusing a significant amount of financial sources on the growing 3-D NAND business.

Of a total of 9.6 trillion won set for investment for facilities this year, which rose 2.6 from an earlier plan, about 2.2 trillion won has been allotted for construction of a new fabrication line for NAND chips in Cheongju, North Chungcheong Province.

Besides the announced investment, SK hynix decided to invest about 4 trillion won (395 billion yen) in the Bain Capital-led global consortium, named Pangea, to acquire the NAND flash business of Japan’s Toshiba at a board meeting on Wednesday.

Of the investment, 1.3 trillion won will be used to acquire convertible bonds to be issued by another special purpose company, BCPE Pangea Cayman2 Ltd, according to the decision.

“If converted, the bonds will allow SK hynix to secure 15 percent of Toshiba‘s semiconductor business,” said a report by Moody’s.

“The acquisition represents a step towards consolidation of the NAND flash memory market, which is a long-term positive,“ said Gloria Tsuen, vice president and senior analyst at Moody’s.

Toshiba on Thursday announced an official signing of the share transfer deal with the consortium, adding that the US investors will not acquire any common stock or voting rights over the Toshiba unit, while SK hynix will be firewalled from accessing Toshiba‘s proprietary information and will not be permitted to own more than 15 percent of the voting rights in Pangea or Toshiba.

Although Toshiba’s words were perceived as being highly defensive, financial analysts viewed the announcement positively.

“Such an investment decision seems to help brighten the company’s growth prospects in the NAND business,” said Kim Kyung-min, analyst at Daishin Securities. “If the Toshiba unit’s market value is reflected in, SK hynix’s market cap is forecast to appreciate 9 percent to 79 trillion won.”

An industry official interpreted Toshiba‘s announcement as ”the beginning of long-term cooperation between the two chipmakers,“ taking it neutrally.

Amid the prospering semiconductor market, SK hynix has been expanding investments every year. Since joining SK Group in 2012, the company kept increasing R&D spending from around 800 billion won up to 2.1 trillion won last year, which accounted for 12.2 percent of the annual sales.

Despite the growing investments, SK hynix posted a record high of 46 percent in EBITA margin in the second quarter of this year.