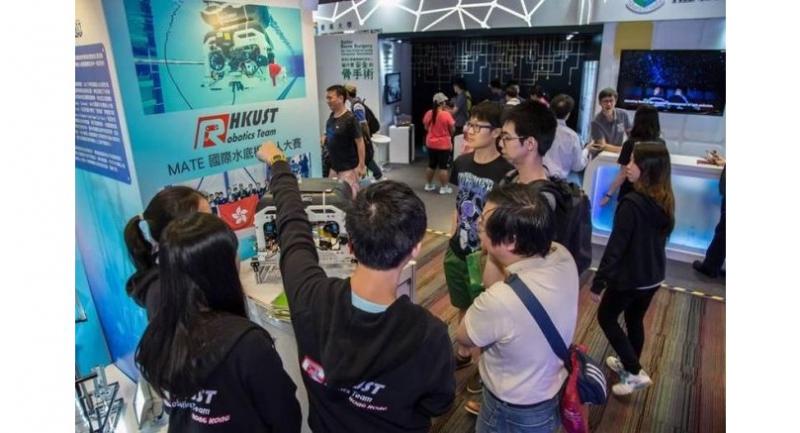 This photo posted on the Facebook page of Hong Kong University of Science and Technology (HKUST) shows people at the booth of the HKUST Robotics Team at the Hong Kong Science Park on Oct 27, 2017.

HONG KONG – The Hong Kong University of Science and Technology (HKUST) announced on Monday that its research team has developed Hong Kong's first unmanned car with a host of innovative functions, including the ability to avoid obstacles as it travels on its planned route.

The team from the Robotics Institute at the HKUST was led by Ming Liu, assistant professor in the Department of Electronic and Computer Engineering of the university.

It has developed an advanced unmanned passenger vehicle system comprising multiple subsystems, ranging from the sensor systems to the dynamic modelling.

"We believe this is the starting point for a new generation of unmanned vehicles that saves manpower on the one hand, and enhances safety, on the other," Liu said.

This invention was one of the projects showcased on the HKUST Robotics Day on Monday. The other projects included an autonomous drone and an autonomous boat, both of which utilize similarly advanced navigation systems.

Michael Wang, director of the HKUST Robotics Institute, said the biggest challenge for robotics development at present is the availability of critical mass and skills to tackle the key problems, including external funding, facilities, and industry involvement.

"We at the Robotics Institute have made a very promising start, and we look forward to continued support from the government and the private sector," Wang said.

The HKUST Robotics Institute is a multidisciplinary platform for integrating, facilitating and enabling university-wide programs in robotics-related research, development and education.