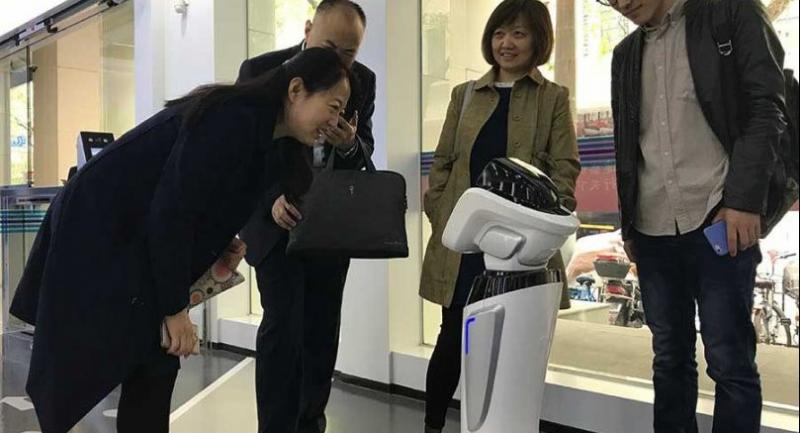 Customers interact with a robot at an "unmanned" bank outlet in Shanghai.

An “unmanned”, fully automated bank outlet that opened on Monday in Shanghai is receiving positive feedback from customers－especially younger ones.

The facility, installed by China Construction Bank’s Shanghai branch on Jiujiang Road in the downtown district, is self-service－replacing the counters and busy clerks at conventional banks－using robots, ATMs, a foreign exchange machine and an assortment of multimedia tools.

It comes at a time when concepts like mobile internet, big data and artificial intelligence have become inseparable to Chinese people’s everyday lives. Visitors attracted by the human-free concept arrived in streams on Thursday.

Hong Yumei, a tourist from Fujian province who came into the facility to withdraw some cash, said she was lured both by the self-service and guidance of robots.

“At conventional bank outlets you have to tolerate the long faces of clerks from time to time,” she said. “But here I don’t have such problems.”

Cao Dongliang, who works for a healthcare company, said he believed the concept will be well-received, so it’s not a publicity stunt.

“In addition to financial services, I hope the self-service bank will integrate a wide range of civil services and become more diversified,” Cao said.

Lu Bin, a clerk from another bank, said she wasn’t concerned that the self-service bank would eliminate her job.

“I am glad that the emergence of an unmanned bank will help reduce customers’ reliance on human operators. It’s not a concept that’s sprung into being suddenly. Many people already deal with wealth management and money transfers on their mobile phones,” she said.

China Construction Bank said the variety of self-service machines－assisted by cutting-edge technologies, such as robots, voice recognition, augmented reality, face recognition, voice navigation and holographic projection－can process more than 90 per cent of the cash and noncash business of a conventional bank.

Customers visiting the bank for the first time need to slide an ID card or bank card to get in through a turnstile. Then their facial information is collected and they can proceed with almost any kind of transaction. They do not need to show their credentials or mobile phones again.

Another highlight of the automated bank is a robotic guide that can understand and reply to all kinds of questions in Mandarin. When asked if it can speak Shanghai dialect, the robot answered: “I am a new Shanghainese and I do not speak the regional dialect.”

In addition to the robots, a few bank employees and a security guard were around to provide help.

“We are here because it’s newly opened and people may have all kinds of questions and need assistance,” said an employee who asked not to be named, citing company rules. “But we don’t put our hands on any of the machines, as conventional clerks do.”