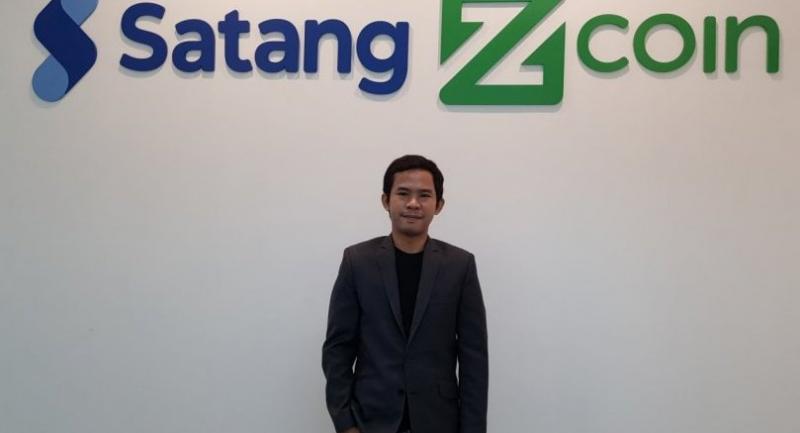 The distributed passion of a crypto pioneer Insom

A passion for cryptocurrency and blockchain advanced technology drove Sub-lieutenant Poramin Insom to quit his job three years ago at the Royal Thai Armed Forces, where he was in charge of cyberwarfare, to pursue his dream of creating a practical real-life use for digital assets.

Poramin, the founder and chief executive officer of Satang Corporation, is one of the pioneers in the cryptocurrency business in Thailand. He first got involved with the virtual currency while he was a student in the Security Informatics Master’s programme at Johns Hopkins University in 2014.
Poramin created Vertcoin, which became the world’s fourth-most valuable cryptocurrency in February 2014, reaching a US$20-million market cap within a week of its launch. Not long before, the bitcoin price had hit $1,300, attracting his attention and leading him to explore how he could participate in the technology.
“When cryptocurrency and blockchain were getting to be known more by Thai people, it was a good opportunity for me to follow my dream,” Poramin told The Nation Weekend in an interview.
The 30-year-old entrepreneur is also the world’s first person to implement stealth addresses in QT-Wallets, improving cryptocurrency anonymity.
As a blockchain enthusiast, he wanted to work in the blockchain development field after graduating in the US. However, there were few jobs at the time that centred on blockchain development.
Undaunted, he returned to his hometown and pursued a far more challenging ambition - launching his own company to develop blockchain technology for Thailand.
“It’s not just about money, it’s about something that I learnt at Johns Hopkins and that can help my country to become a leader in the blockchain industry,” Poramin once said on his company’s website www.zcoin.io.
However, at the time he came back to Thailand, the junta government was focussed on cyberwarfare and so Poramin applied for a job as a military officer IT expert in the cyberwarfare department.
At the beginning, Sub-lieutenant Poramin was excited about doing his duty as a cyberwarfare analyst.
In the event of malware breaching cybersecurity systems, it was his job to find out where it came from, how and when the attack took place, and who had released the bug. But over time he got bored with the emphasis on paperwork.

New direction
Poramin quit and in 2016 developed Zcoin, an open source, decentralised coin that focuses on achieving financial privacy for its users while they are transacting on blockchain. The approach was intended to ensure the egalitarian distribution of its coins.
With a claim to fame of having been created by a Thai citizen,  Zcoin is among the top 100 of its kind, according to market capitalisation. It pioneered the use of the “Zerocoin” protocol, which uses zero-knowledge proofs in its privacy scheme to break transaction links between transactions. It was also the first to go live with the “Dandelion” protocol, which hides the originating IP of a sender without the use of TOR or VPNs.
Zcoin has been live since September 2016 and is traded on the world’s top cryptocurrency exchanges, such as Binance, Bittrex and Huobi.
It now trades at Bt160, down from its peak of Bt5,000 per coin, according to its creator.
In 2017, Poramin founded Satang, a financial services company, with Bt50 million in registered capital.
The company was founded with an aim to become the go-to digital asset service provider. Operating within the existing legal framework, it is highly trustworthy, says Poramin, and adheres to international security standards.
The current service from Satang provides an exchange market for trading cryptocurrency on Satang Pro, formerly known as TDAX.
Among five exchanges in Thailand, TDAX is the second largest with daily trade volumes of cryptocurrencies estimated at Bt100 million and about 30,000 investors trading daily, he said.
So far, 18 cryptocurrencies are kept on the trading market but only five currencies are trading, according to the CEO.
With the aim to encourage people to use more cryptocurrency in their daily lives, Satang plans to launch Satang App and Satang Shop next year to help facilitate people in using the coins to sell or buy goods online, Poramin added.
Satang App is an e-wallet that would allow consumers to make payments via PromptPay infrastructure.
Satang Shop is an online shop that enables cryptocurrency payments.
Both features will enable e-commerce vendors to accept cryptocurrencies, and online buyers to pay with them. And using it is simple, involving registering as a member, Poramin said.
If the vendors are confident in the value of the coins they could keep them for as long as they want or they could convert cryptocurrencies into cash through Satang Pro, he said.
“Our goal is to make 3 per cent of the total Thai population, or 2 million people, use digital coins in their real lives. I want them to spend it to buy goods or products, not just use it for speculation,” he said.
Poramin also plans to launch asset-backed cryptocurrencies in the future.
The value of coins now depends on supply and demand but if the coins have assets backing them up – for example, a condominium – it will attract more people to own them as it would be more reliable than just speculation, he explained.

Taking the technology further
In addition to cryptocurrency, Poramin is passionate about blockchain, an open, distributed ledger that can efficiently record transactions between two parties and in a verifiable and permanent way.
His thesis at Johns Hopkins was about how blockchain could be used for money transfers in which the identities of the sender and the recipients would not be known to people outside the transaction, nor would efforts to trace the transfer be possible.
His technology was different to that of the “digital gold” bitcoin, a decentralised digital currency without a central bank or single administrator. That currency can be sent user-to-user on the peer-to-peer bitcoin network without the need for intermediaries, and people can still know who is involved in the transactions.
Poramin was a key player in the recent introduction of blockchain in Thai politics, when the Democrat Party’s leader was for the first time chosen in a primary election involving more than 120,000 voters.
Due to distrust among the party’s candidates, Poramin last month helped the Democrats tap the potential of this new technology, which offers increased transparency along with other benefits.
The party’s primary vote for its leader utilised the Zcoin blockchain, also marking Thailand’s first large-scale electronic voting with two sets of data involved: identification documents and vote tallies, he explained.
In his view, Thailand has the potential to utilise the advanced technology in a national election. It would be possible to see it implemented in the next few years, if pressure by voters and candidates increased.
He said election organisers could develop electronic-voting machines and use blockchain to store the voting data.
“I believe we’ve achieved a huge milestone in our country’s political history and hope other political parties or even governments, not just in Thailand but elsewhere in the region, can look to using blockchain technology in enabling large scale e-voting,” Poramin said.