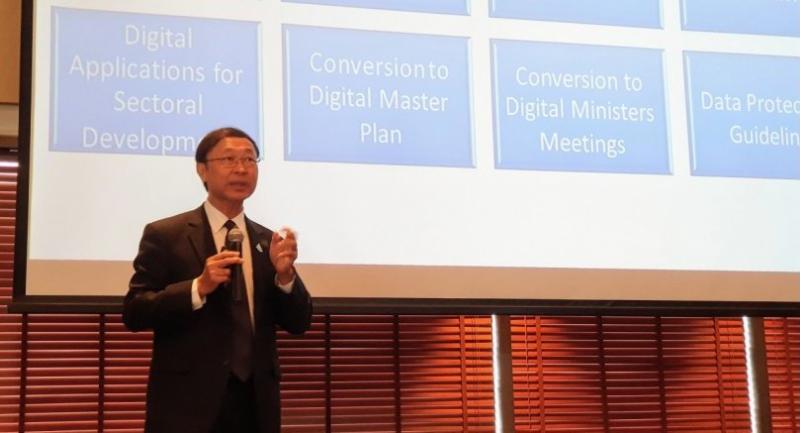 Pichet Durongkaveroj, the Minister of Digital Economy and Society, outlines the government’s plans to develop the digital economy at a World Bank seminar yesterday.

THAILAND is closing in on two milestones marking its advancement in digital technology – the extension of internet coverage to all villages and the final testing for a national digital ID scheme.

Although these tasks are set to be completed this year, the World Bank has warned that more needs to be done if Thailand is to catch up with its neighbours such as Malaysia and Singapore. The multilateral lender noted the country’s shortcomings in a report on the digital economy in the Asean region.

“Our goal is to provide internet access to all Thai villages by the end of this year through the Village Broadband Internet Project (Net Pracharat),” the Minister of Digital Economy and Society, Pichet Durongkaveroj, said yesterday at a World bank seminar on Asean’s digital economy.

The project in 2017 identified 75,000 villages in the Kingdom that lacked high-speed internet. So far, 57,000 have been provided with such access and the remaining 18,000 villages will be connected by the end of this year, the minister said in an interview amid the event’s proceedings.

As much as half of Asean’s people lack access to affordable high-speed internet, according to a report titled “The Digital Economy in Southeast Asia: Strengthening the Foundations for Future Growth”, which was published at the beginning of this year by the World Bank.

Natasha Beschorner, the World Bank’s senior ICT policy specialist, commended the Thai government’s efforts to increase internet access in rural areas. However, she said that more needed to be done to make sure that the internet access points in these villages are accessible to those living there.

“The key obstacles for increasing internet access to rural areas are not only availability, but also affordability. One way Thailand can make access to the internet more affordable is through making internet providers share the relevant digital infrastructure to reduce costs,” she said.

The report found that Thailand’s broadband remains much less affordable when compared with the services offered in its Asean neighbours such as Singapore, Malaysia, the Philippines and Vietnam – accounting for around 1.7 per cent of gross national income per capita in 2016. The World Bank is urging the incoming government to pass regulatory reforms to promote competition and lower the price of broadband.

Meanwhile, the development of the national digital ID scheme is in the final testing stages, Pichet told reporters. The platform will allow businesses and government agencies to cross-reference their data and verify the identity of their customers and clients online.

As has become standard practice for Thailand’s digital transformation, the implementation of National Digital ID (NDID) will start with the financial sector. The Finance Ministry, Pichet said, is working with 10 banks to allow customers to open their bank accounts online without having to visit a physical branch.

Boonsun Prasitsumrit, chief executive officer of the National Digital ID company, said that the initial testing of the NDID platform had been completed, and the system has now moved on to the sandbox stage, which is expected to be wrapped up by the end of this year.

The World Bank, however, urges more regional cooperation on this issue. In particular, its report contends that without a shared digital ID system throughout the Asean region, the integration of the Asean Economic Community will continue to face barriers that hinder the growth of the e-commerce market.

“This is because the lack of cross-border interoperability can delay shipments in the region, increasing transportation cost for businesses,” Beschorner said.

Governments in the region should work together to pass laws that increase the ease of doing business between borders. This would, in turn, entice small and medium-sized enterprises that are starting to use e-commerce to ship their products abroad, she said. Only Singapore has realised a digital ID system that facilitates online transactions, and it is being upgraded.

Singapore’s digital ID system (SingPass) is limited the accessing of government services, but a new National Digital Identity (NDI) system - built on top of the existing foundational ID system - is being developed for public and private-sector transactions, the report said.