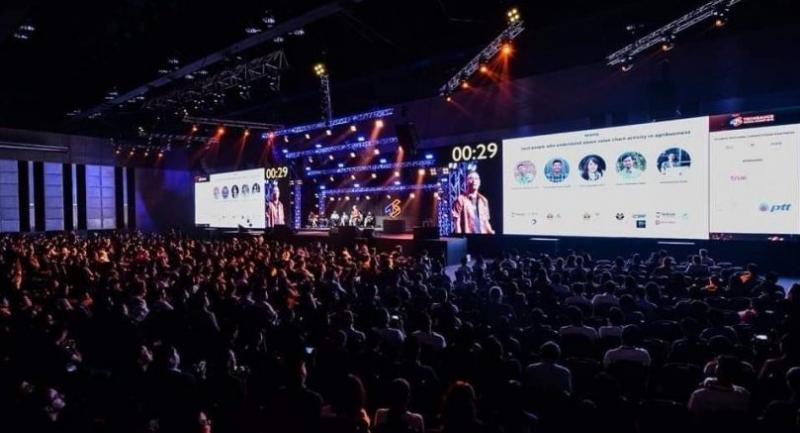 By drawing on her business and technical expertise, tireless  Oranuch Lerdsuwankij is building bridges between founders and investors

With the dream to see Thailand emerge as a leading start-up country in Asia, entrepreneur Oranuch Lerdsuwankij, the chief executive officer and co-founder of Techsauce Media, has embarked on this challenge by launching the Techsauce Global Summit.

Upon graduating in telecommunications engineering from King Mongkut’s Institute of Technology Ladkrabang almost 20 years ago, Oranuch, now 40, began her working life as an employee to earn enough to support her family which had been bankrupted when she was a first-year student at KMITL.

Student Oranuch, known as Mimee, was told by her father that he had no property to give her, other than to ensure she had an education so that she might be able to build a home for herself. Her first dream after graduating was to buy a house for her family and support her younger sister’s studies.

Her first job was in DTAC’s product development team. Her role, which lasted three years, involved communication between the marketing and engineering teams. Though only 22, and needing to communicate technical messages to the senior marketing team, she heeded the advice that a smart person is one who can explain difficult things in an easy way.

Oranuch then moved to TA Orange to take on similar work, but also getting involved in OPEX/CAPEX so that she could practice evaluating operational costs – a skill that she now says helped her a lot when she began her own business.

After five years, she left to work for a technology vending company as a solutions manager for a short while, before returning to work for True Corporation for another three years. She was a part of the launch of 3G and BlackBerry in Thailand at that time and expanded her domain to cover more marketing work.

“I was lucky to be given a chance in which all of my past opportunities and experiences were connected and I could at that moment become who I am,” said Oranuch.

While working at True Corp, she started her media business journey by joining with friends to establish Thumbsup, a news website that provided online content, initially about digital marketing. She loved writing a blog and sharing her knowledge with others.

Her turning point came when she began reading startup stories and found that Thai start-ups were not widely recognised in Southeast Asia. She created a new area on Thumbsup to publish and promote start-ups.

“Startups were very new in Thailand at that time, around 2010 and 2011,” recalled Oranuch.

It helped her to discover herself and to realise that her interest was not in digital marketing but rather about start-ups. It was the important dot that connected her to Techsauce. She loved start-ups because of her love for the innovation aspect of businesses in which they can solve social and other problems for people. To achieve that requires creativity and a deep understanding of customers. She devoted a lot of time to learn more about start-ups around the world.

At this time, Oranuch was partnered with Computerology, and that exposed her to a lot about start-ups, such as the concepts of “building from zero” and “pain points”. She blended her knowledge from working at corporates with her understanding of start-ups.

“I am not a journalist. But I am in between the two sides – startups and corporates. I realised that’s how we can help them both,” said Oranuch.

Around this time, she quit her employee life to fully become an entrepreneur. She resolved to do anything she could to get things done immediately without getting approval from the others, and learned that she enjoyed to have things “in my control”.

In 2014, she separated the startup content from Thumbsup and established Techsauce Media after having since 2012 worked to build a start-up community under Thumbsup. Her first startup community event was called “Start It Up”.

Techsauce Media set out to be a content generator that developed quality informative content for startups and corporates. She said good content does not need to be in a media format; it can be presented in an event format such as the Techsauce Global Summit in which content is created to get people to learn more about start-ups and corporate innovations at an event and conference.

Moreover, “good content” in her meaning turned to be an accelerator programme that her company worked on for the Digital Economy Promotion Agency (Depa). It also included an annual start-up economy report.

After launching the “Start It Up” local startup event in 2015, she took on the challenge of turning it into a global start-up event under the name “Techsauce Global Summit” starting in 2016.

“It needed to bet, to choose to go big – or to go home,” said Oranuch.

She decided to take on that scaling risk, and expanded it by 10 times in terms of the number of start-ups, investors, partners, speakers and attendees. The move was aimed to place a pin-point on Thailand’s presence on the world’s global start-up map. In that first year, many sponsors did not believe in her dream but she refused to be discouraged.

“I did not have 10 times the confidence. I just realised that I had to get it done, and if it failed that was still better than doing nothing,” said Oranuch.

In the last five years, Techsauce Media has played the role of a platform that helps Thai start-ups to meet investors and partners at the event. It serves as a connecting runway for Thai startups to move forward, and also as the bridge between overseas investors, start-ups, and partners on one side and Thai startups on the other.

In her entrepreneurial life, Oranuch has every day worked hard, 10 times the hard work of being an employee. Yet she insists that she is not tired because she very much enjoys her work.

The success of Techsauce is the success of her team, she said. Her success is to do what she loves. However, she remains unsatisfied over the accomplishments of Techsauce Media, and even though the branding of Techsauce Global Summit has been acknowledged among those in the global start-up community, Oranuch said there is room for improvement. The summit is only half way to success, she said.

And yet, her confidence has strengthened as Techsauce Global Summit grew to be the biggest and most qualified start-up event in Southeast Asia, based on evaluations from those who participated in this paid event. Charging for the event is intended to screen people, so those who attend are genuinely there in search of business matching and partnerships. She said there were more than 500 deals pursued at the event.

“I set the goal so high to challenge myself and our team,” she explained.

This year’s theme for Techsauce Global Summit is “technology for life”, as technology creates the tools for reaching a better life. People do not need to be afraid of the coming of artificial intelligence, she said, but can take advantage of new kinds of technology. The event will educate people about this, she said, adding that people need to reskill and upskill. Technology is engaged with all people, no matter who they are and how old they are.

“This event is not for start-ups and corporates – it is for everyone as an individual person. We adjust content to align with the mass of people,” said Oranuch.

In her management role, she sees communication and trust as most important. She always manages transparently in order to ensure good communication with her staff, who are mostly generations Y and Z. She said it is important to understand their life values as well as to listen to and respect them.

“I am not born to be an entrepreneur. I am a content creator who turned to business. It is like other start-ups that find they need to scale their business, while they also need to have good coaching for the employees,” she said. Being female is a factor that has no effect on her working life or her business, she said.

“We each need to find our goal for life; my most important value is to be grateful to my family and to others.”