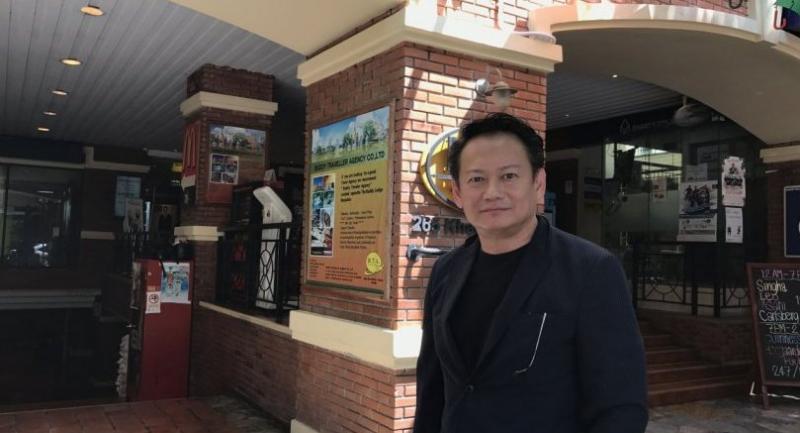 THAIS have booked out the budget hotels in Bangkok’s Khao San Road precinct – long a haunt of foreign tourists – during the period of the Royal Cremation ceremonies that begins today, said Sanga Ruangwattanakul, president of the Khao San Business Association.

Thais started booking rooms in May and June to ensure participation in the Royal Cremation ceremonies for His Majesty the late King Bhumibol Adulyadej, from October 25-29, said Sanga.
Surprisingly, about half the bookings are from Bangkok residents, with the rest from other provinces, he said. Together, they have booked almost 100 per cent of the 800 rooms available in Khao San Road, an area that was put on the international tourist trail by backpackers.
Foreign tourists were expected to return to the precinct after the end of the mourning period, Sanga said.
The tourism high season has just begun and will last until April, when tourists flock to celebrate the Songkran Festival in Khao San Road.
Sanga expects to see a rising number of foreign tourists in this high season, particularly from Europe and Asia. European travellers account for 70 per cent of the tourists who stay in Khao San hotels, with the rest mainly from Asia.
Tourism spending dropped about 30 per cent this month as outdoor entertainment was temporarily closed, as well as with the month-long closure of the Grand Palace – the most popular drawcard for tourists – near the Khao San area.
Sanga estimates about 50,000 people will stay in the Khao San area during the Royal Cremation period, as people want to stay close to the ceremonies and ensure they have a chance to pay their last respects to their beloved late King.
Vichit Prakobgosol, president of the Thai Association of Travel Agents, said the number of tourists visiting Thailand this year was expected to reach 35 million, up from 32 million last year.
As the global economy continues to recover, this would spur inflows of tourists from many countries, especially in Eastern Europe, Latin America, Canada, India, China and Asean, Vichit said.
Floods in some provinces have had little impact on the tourism industry as some visitors may postpone visits to the affected areas for a few days or few weeks, he said.
The Tourism Authority of Thailand’s move to open representative offices in Brazil and Canada has also contributed to a rise in tourist numbers, he said.
However, he drew a distinction between a focus on the absolute number of tourists and the need to ensure that efforts were not focused on a just a few popular destinations. The country needed to earn more from tourism and the promotion of attractions in less popular provinces would serve this goal, Vichit said.
European tourists usually stay about 14 days in Thailand, leading to more spending. While spending per head of Chinese tourists is high, at about Bt40,00-50,000, they typically spend less time in the country, about 6-10 days.
Aquila and Jonattha, a young couple from Brazil who checked in at the Buddy Hotel on Khao San Road on Monday, said they wanted to have a chance to watch the Royal Cremation ceremo-nies as well as visit the many beautiful temples in Bangkok before going north to Chiang Mai, in order to experience natural sightseeing.
Meanwhile, shops in the Khao San area have adjusted their opening hours, and many are closing from October 24-29. Entertainment operators are also shutting their doors during the period, in deference to the Royal Cremation ceremonies.
The Royal Cremation will take place on October 26. From the street, the frontage of many of hotels has been adorned with black ribbons and some are displaying the late King's portraits for mourning. Thais are wearing black.
Warapa Chantanayont, head of the waitresses at Tom Yum Kung Restaurant in the Khoa San Road area: said: “Now, we play the late King's musical compositions and mourning songs and band music has been dropped for one month. We offer food only in the daylight hours.”
Monty Makelani Tuha, a Hawaiian tourist visiting Thailand for the third time, said he understood the current quiet situation at Khao San Road due to the mourning. “I respect the [Thai] culture and realise that Thai people really love their late King very much,” he said.