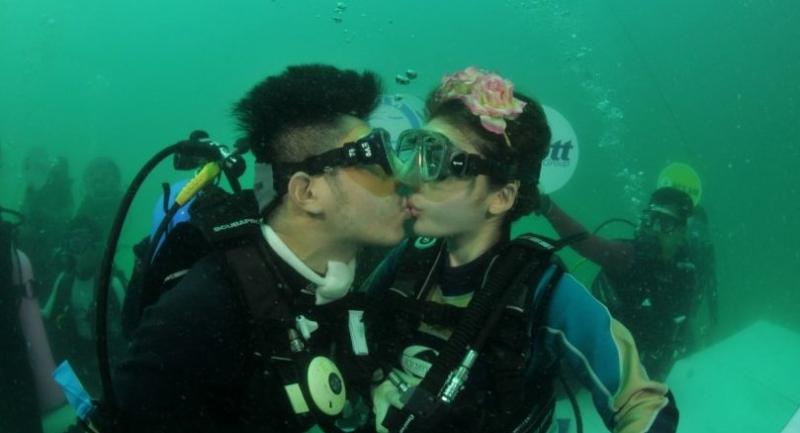 Thailand is being touted as an international hotspot for wedding ceremonies with an increasing number of sites, activities and facilities available to transform an ordinary marriage ceremony into an unforgettable dream wedding.

Mr. Yuthasak Supasorn, TAT Governor said, “The hosting of the DWP Congress 2017 has provided an opportunity for Thailand to enhance our profile as a preferred wedding destination for couples from around the world. Global wedding planners have had the chance to learn more of Thailand’s plethora of wedding facilities and romantic settings as well as to meet and discuss business prospects with Thai tourism and wedding operators at the Congress. They have also had the opportunity to experience first-hand the wide variety of wedding products and services available in some major Thai destinations, including Phuket, Chiang Mai and Koh Samui.”

After the Congress, the TAT organized three-day tours at three destinations – Samui, Chiang Mai, and Phuket – to show off the highlights of each site, including the luxury accommodation available, spa treatments and more.

The DWP Congress 2017 in Phuket, Thailand, was attended by more than 450 delegates from 65 countries, all by invitation only. The event was an avant-garde initiative and the only one of its kind in the world. The first DWP Congress took place in Greece in 2014, followed by Mauritius in 2015, and Florence, Italy, in 2016.

Here are some of the better known destinations for that dream wedding in Thailand:

The Trang Underwater Wedding Ceremony has been held annually since 1996 to attract loving couples from around the world to celebrate a uniquely romantic and once-in-a-life-time wedding ceremony in the beautiful underwater world. Taking place every February during the week of Valentine’s Day at Kradan Island, one of the most scenic islands off Trang province, the event is recorded in the Guinness Book of World Records as the largest underwater wedding in the world, with the greatest number of wedding couples joining the event in 2000.

In the early morning, the participating couples conduct a traditional Thai-style wedding ceremony, consisting of several Buddhist rites. The ceremony usually starts with a Khan Mak procession, a colorful and lively parade in which the grooms make their way to ask the brides’ parents for their daughters’ hand, accompanied by folk dances and songs. This is followed by the blessing ceremonies of water-pouring and sending off the brides and grooms to their room, accompanied by old happily-married couples in line with the Thai long-time belief that this will bring auspiciousness and long-lasting love to the couples. Next is the highlight of the ceremony when the wedding couples who are required to be certified divers dive to sign their marriage certificates under the waves, witnessed by a district registrar and some diving trainers. The ceremony generally wraps up with a joyful wedding reception ceremony on the white sandy beach in the evening.

The Lanna Thai wedding ceremony is native to the region of northern Thailand. It is widely regarded by a number of foreigners as an amazingly romantic way to celebrate their nuptials. The ceremony frequently takes place in the two most popular northern provinces of Chiang Mai and Chiang Rai.

This traditional wedding ceremony generally begins with a Khan Mak procession to mark the arrival of the groom at the bride’s home. The bride and groom, clad in the traditional Lanna costumes, will perform an alms-giving ceremony to receive blessings from Buddhist monks, then go through a water-pouring ceremony and paying respects to elder members of the two families. Afterward, a Lanna-style wedding banquet, mostly featuring traditional Lanna dishes in the form of Khantok, will be arranged.

What makes the Lanna Thai wedding ceremony very unique is an exceptional merit-making rite to symbolize the beginning of new life, happy married life and longevity of the wedding couples. Other uniquely distinctive rites include “Riak Kwan” or spirit calling, in which the master of ceremonies will chant a prayer in the Lanna language to get the couples’ protective spirits back to safeguard them, as well as wrist tying of the bride and groom to represent the strong bond between them.

One of the most unique and outstanding ways to tie the knot, the wedding ceremony on elephant back is held every year to celebrate the day of love at the Elephant Study Center in the northeastern province of Surin. The ceremony was originated by the local “Guay” tribe and has been traditionally practiced since ancient times. It is also widely known as the “Sut Tae” ritual.

The ceremony sees two majestic elephant processions of the brides and grooms who wear the traditional Kuai-style wedding attire and sit atop a houdah on the back of an elephant. It features marriage registration on the elephant, which is believed to bring about good fortune and prosperity to the couples. Additionally, the couples take part in activities such as the Bai Sri Soo Kwan welcoming ceremony, in which the Bai Sri tree, adorned with white or colored strings, will be tied around the wrists of the couple, and traditional drum performances and dancing.

Another ideal place for those wishing to get married on elephant back in the Lanna style is the Thai Elephant Conservation Center in the northern province of Lampang.

On the wedding day, usually taking place on Valentine’s Day of each year, the loving couples, both clad in graceful Lanna-style wedding gowns, will experience the Lanna wedding ceremony, ranging from the Khan Mak procession, wrist-tying rite through to marriage registration on elephant back.

Wedding Ceremony on the Beach

Thailand boasts some of the most beautiful beaches in the world. The country is internationally renowned for its clear pristine waters, azure sky and white powdery beaches, particularly its southern islands and shores. That’s why a beach wedding is a dream for many foreigners.

Thailand’s top beach wedding and honeymoon destination is Phuket, the country’s largest island with a diverse archipelago that offers a hundred destinations in one. There are another 32 smaller islands offshore including Koh Yao Noi, Koh Racha and Koh Phi Phi to name just a few. Koh Samui ranks second behind Phuket for beach wedding popularity, and its outer archipelago features Koh Tao and Koh Phangan. The magnificent backdrop of Krabi’s limestone cliffs is also popular for weddings and honeymooners alike, as is Khao Lak north of Phuket in Phang Nga province. Aside from the southern islands, the tranquil seaside city of Hua Hin, which is a few hours drive from Bangkok, as well as the eastern coast are nice and romantic enough.

Loving couples will be spoilt for choice for beach wedding packages offered by both professional wedding planners and beach resorts in Thailand. They can decide on their preferred wedding style – Thai Buddhist, eastern or western – and design their own wedding party and theme with the assistance of wedding planners.

Phuket Baba Wedding is an annual event held to conserve the local traditional wedding of the Baba people or Peranakan, who are descendents of Chinese who migrated to Phuket in the 19th century. Also known as “Baba (male) Yaya (female) wedding ceremony”, the event  has been increasingly popular among foreign visitors in recent years, thanks to its unique traditions, colorful celebrations and nostalgic ambience that brings back memories of the good old days.

Each June, the ceremony is hosted at some of Phuket’s most elegant vintage-designed Sino-Portuguese mansions located in the old town quarter. The grooms in their white suites and the brides in their traditional Chinese costumes perform traditional rituals, such as paying homage to Heaven and Earth Ceremony and the Wedding Tea Ceremony. The wedding’s cheerful atmosphere is usually enhanced by colorful street celebrations along Thalang Road, decorated with red lanterns, a lively parade and a lion dance.

Abseiling Wedding is a true adventure wedding that allows loving couples to abseil down a cliff, with the help of ropes, harnesses, and protective gear, while experiencing the beautiful nature of Thailand.

Originated in 2002 at Weluwan Cliff in Thap Lan National Park of Prachin Buri province, this thrilling wedding ceremony, also widely known as “Banthuek Rak Klang Phupha” or Inscribing Love at the Cliff, takes place every year from February 13-14 to mark Valentine’s Day. Under the “Marriage in the Sky” theme, the first day will see the brides and grooms swinging the giant swing and the bride on the swing tossing the bouquet to single ladies below. On the second day, the brides and grooms will register their marriages and exchange rings, while abseiling down the 60-meter cliff amidst a spectacular view of lush greenery and a waterfall.