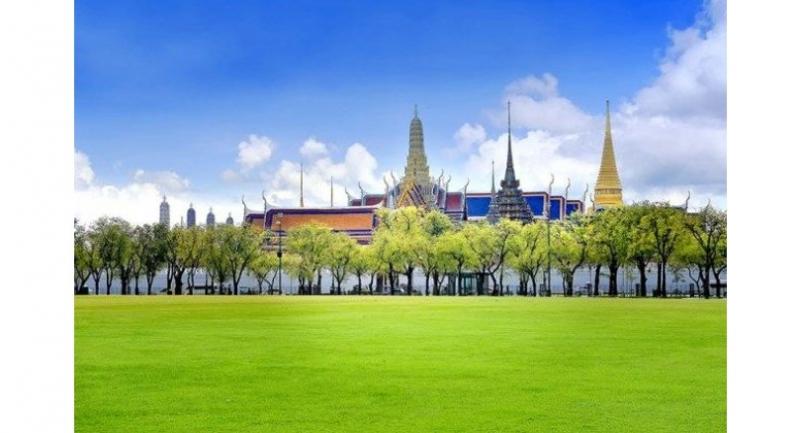 By Courtesy of the Tourism Authority of Thailand

Images of fairy tale castles and towering palaces are not so often associated with Thailand, thus many are surprised to discover there are various palatial palaces spread throughout the kingdom.

The word ‘palace’ in relation to Bangkok will, for most tourists, immediately bring to mind the iconic Grand Palace. Built with the establishment of the new capital in Bangkok in 1782, this spectacular complex was the home of the king and the royal court and also the administrative seat of government for nearly 150 years.

Situated on the banks of the Chao Phraya River in the heart of Rattanakosin Island or the historic Old City area and a must-see for any tourist visiting the Thai capital, the Grand Palace boasts beautiful architecture and intricate detail throughout its various buildings, halls, pavilions, gardens and courtyards.

Dusit Maha Prasat Hall is reminiscent of the Ayutthaya Throne Hall, while the Phra Maha Monthian buildings have been used for royal coronations but are rarely open to the public.

The Grand Palace’s most iconic and majestic structure is the Chakri Maha Prasat buildings, comprising nine structures and which reflect the taste of earlier times for a blend of European and Thai styles. These were built between 1868 and 1887 and were commissioned by King Rama V the Great. Only three buildings of the former nine structure complex remain today, among these being the famous Chakri Maha Prasat Throne Hall.

Originally conceived in pure European style, the Throne Hall blends an Italian style classical façade with a Thai-style roof crowned by gilded spires. It was built between 1876 and 1882 and was Siam’s first structure with electricity.

Overall the Grand Palace is an intriguing blend of Thai and European structures, a stunning mix of ceramic-cladded stupas, gothic style façades and golden spires that speak of classical columns and porticos.

Being one of Bangkok’s top attractions the Grand Palace is regularly crowded with visitors, and luckily there are other palaces in the city which are open to the public for visiting. Bangkhunphrom Palace along Samsen Road is a magnificent early 20th century European-style palace known for its ornamental stucco details and elaborate interiors, although it is currently undergoing renovation.

One of the most striking palaces in the Dusit area has to be Parusakawan Palace, which is an extraordinary blend of baroque architecture inside and art nouveau outside. The former residence of the Chakrabongse family, this palace evokes the splendours of rococo or late baroque art in Italy or Austria. In particular, there is the main room with walls covered by mirrors, golden stucco and crystal chandeliers. The Palace also features a police museum.

Not far from Victory Monument is Phayathai Palace, an early 20th century royal residence built by King Rama V the Great in 1910. A noticeable feature is the European-style round turret with a red conical roof, which almost seems to have come right from a fairy tale castle. The building’s interior is very European and includes beautiful frescos on the ceiling in Italian style.

Around 140 km south of Bangkok, along the Gulf of Thailand, the provinces of Prachuap Khiri Khan and Phetchaburi are home to many palaces including the kingdom’s first European-Thai style palace.

Phra Nakhon Khiri Historical Park is perched on a hill overlooking the city of Phetchaburi and while its name means Holy City Hill, it is better known locally as Khao Wang or hill with a palace. The palace complex was built for King Rama IV in 1860 and blends elements of European, Chinese, Khmer and Thai architecture. This was a beloved summer residence for the King, with its white stupa and neo-classical structures, observatory tower and theatre, and while there he liked to observe the stars.

In the town itself is Phra Ram Ratchaniwet Palace, also known as Ban Puen Palace, which was designed by a German architect and features both art nouveau and baroque style with its curves, ceramics and statues. Large windows from the floor to ceiling help create a bright and spacious feeling in the Palace’s rooms, and the whole interior exudes luxury and grandness. Completed in 1916, the elegant Palace is now home to the Phetchaburi Historic and Arts Museum under the supervision of the Royal Thai Army.

In Cha-am is Mrigadayavan Palace, which served as the seaside palace of King Rama VI. Designated a cultural heritage site in 1981, it is in an ongoing restoration project that aims to restore the Palace grounds and surrounding coastal vegetation in time for the Palace’s 100th  anniversary in 2024.

Blending Thai and Western styles, the Palace comprises 16 teak buildings connected by balconies and corridors and elevated on pillars to aid ventilation, and 23 staircases. For tourists and visiting school groups, Mrigadayavan Palace plays the role of an educational museum with exhibits on conservation and history.

North of Bangkok in the vicinity of Ayutthaya, Bang Pa-In Palace was used by Thai kings and inspired by the royal summer palaces of Europe. Originally built around 1630 by King Prasat Thong, it fell into decay following the war in 1767 and then began to see some restoration in the 19th century under King Rama IV. From 1872 to 1889, King Rama V the Great commissioned architects to redesign the entire compound as a European palace with an Asian touch.

Also known as the Summer Palace, Bang Pa-In Palace is situated alongside the Chao Phraya River. Amid its gardens and landscaping is an eclectic collection of small palaces, pavilions and various structures inspired by the United Kingdom, France and Italy.

There’s the colourful Chinese-style royal palace Wehart Chamrun (Heavenly Light), which served as a throne room, the Warophat Phiman (Excellent and Shining Heavenly Abode) royal residence, Ho Withun Thasana (Sages’ Lookout) a brightly painted lookout tower, and the Aisawan Thiphya-Art (Divine Seat of Personal Freedom), which is a Thai style pavilion in the middle of a pond that offers a sharp contrast with the European style statues and neo-classic pavilions.

Swiss Chalet in the Mountains

Among the palaces of Northern Thailand are Daraphirom Palace just outside of Chiang Mai city and Doi Tung Royal Villa, both former royal residences.

About 20 minutes out of town, Daraphirom Palace in Mae Rim district was home to Princess Dara Rasmi, a consort of King Rama V the Great. This large wooden mansion on stilts was built in 1913 blending Thai and European architecture and is now a museum offering a look into how the Princess lived in the early 20th century. On display are many of the princess’s personal belongings and items relating to her work in the fields of culture, the arts and agriculture. Visitors can see antique furniture, photos, musical instruments, dinnerware and more.

An hour’s drive from Chiang Rai city, the beautiful Doi Tung Royal Villa was home to Princess Mother Srinagarindra. Built in dark teakwood, the Villa affords sweeping views over the mountains of Doi Tung and has a distinctive Swiss flair. Its wooden balconies and rustic style furniture evoke thoughts of a chalet in Switzerland. The Villa is today a museum in honour of the Princess Mother and how she dedicated herself to improving the livelihood of the local people.

Stretching out in front of Doi Tung Royal Villa is Mae Fah Luang Garden, the landscaped expanse filled with hundreds of kinds of plants and flowers.

These are some of Thailand’s most prominent palaces. There are more throughout the country, dazzling architectural gems in their own right, and each one a unique attraction waiting for tourists to discover.