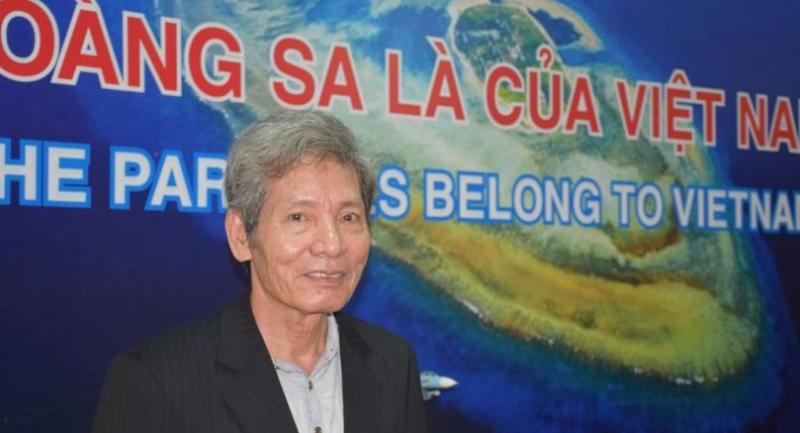 Dang Cong Ngu poses in the Office of the People's Committee of Hoang Sa district in Danang City, which displays mpas and documents supporting Vietnam's claim to the Paracel Islands.

This is the second article in a four-part series on the South China Sea. The Nation reports from the key Vietnamese cities of Danang, Khanh Hoa and Ho Chi Minh City on how the country and its people view the contentious sea.

DANG CONG NGU, a retired official of Vietnam’s Home Affairs Ministry, was assigned by the government as chairman of the Hoang Sa People’s Committee to take care of the disputed Paracel archipelago from 2005 to 2014. But honestly, he said, he has never visited the islands or any place nearby since it had been de facto occupied by China for three decades before he took the position.

Vietnam claims ownership of the archipelago, known locally as Hoang Sa or internationally as the Paracel Islands, from the 17th century. Situated in the contentious South China Sea some 120 nautical miles from the Vietnamese coastline, the archipelago is closer to Vietnam than to China, which Ngu said supports his country’s claim of sovereignty in accordance with international law.

“Vietnamese and Chinese books written in 1696 and 1776 confirmed that Hoang Sa belongs to Vietnam from the first half of the 17th century under the Nguyen dynasty,” he said in an interview with The Nation.

Ancient Chinese documents and maps indicate that China’s territory ended at Hainan Island and did not extend to the Paracels, he said. Vietnamese first discovered and utilised archipelagos in the South China Sea, which Vietnamese call the East Sea, he said.

During the Nguyen dynasty, the Vietnamese sovereign assigned subjects to control and manage the Hoang Sa islands, where they set up a border demarcation pillar and from which they controlled trade in the area, he said.

The very name offers a real sense of Vietnamese ownership, Ngu insisted, as all international navigation maps mention the name Paracel, translated by the Portuguese as “golden” and equivalent to the Vietnamese hoang sa, which meant those early navigators recognised the Vietnamese name.

Disputes over the Paracels bet-ween China and Vietnam date back to World War II when Vietnam’s colonial power France, China and Japan all competed to control islands throughout the South China Sea.

Prior to the war, France controlled the Paracels as part of its Indochina territories, but during World War II, the Japanese army seized control. After Japan’s defeat in the war, the French colonial empire resumed its occupation, including the islands, only to be forced out during the Vietnamese war for independence, which saw Vietnam divided into North and South until reunification in 1975.

China also asserted its own claim after World War II when the Kuomintang nationalists, who were later pushed off the mainland to Taiwan, occupied parts of the Paracel archipelago in 1946 to force the Japanese army out, Ngu said.

Since unification in 1975, the government in Hanoi has promulgated all the rights and claims previously asserted by its former rival South Vietnam.

In 1997, Hoang Sa was made a district under the supervision of the city of Danang and a People’s Committee was assigned as a form of administration.

“As the chief of the district, we need to take control and take over all activities in Hoang Sa district, but since it is currently under China’s control, we have a lot of challenges and troubles to manage,” Ngu said.

Hanoi will never give up its claim to the Paracels, he said, adding that the government in Hanoi has mapped out a long-term strategy for return of the island. During his term, Ngu mostly worked to collect documents, historical evidence and witness testimony from Vietnamese people who used to live and work on the islands before China invaded.

Most of those people are officials and staff of the former South Vietnam regime, many of whom have left Vietnam to live in abroad since unification in 1975. “So far, officials in Danang city and I have contacted 25 people. Most of them are now in their 70s and have given their accounts for the record,” Ngu said.

“Our main responsibility is to provide correct evidence to prove our sovereignty. After almost 10 years of serving the district, we have made a lot of progress, and we have provided a lot of documents to the international community,” he said.

“We also prepared documents for our senior leaders to take part in an international conference about the South China Sea. In all Asean forums, where the South China Sea has been mentioned very often, [there is] a lot of positive vocal support for Vietnam on this issue,” he said.

However Ngu said: “We need to be always ready but careful, and take a long-term strategy with adequate international legal instruments, follow up on international laws and collect all necessary legal bases through a diplomatic solution in a long-term process. We believe we will get what we want.”