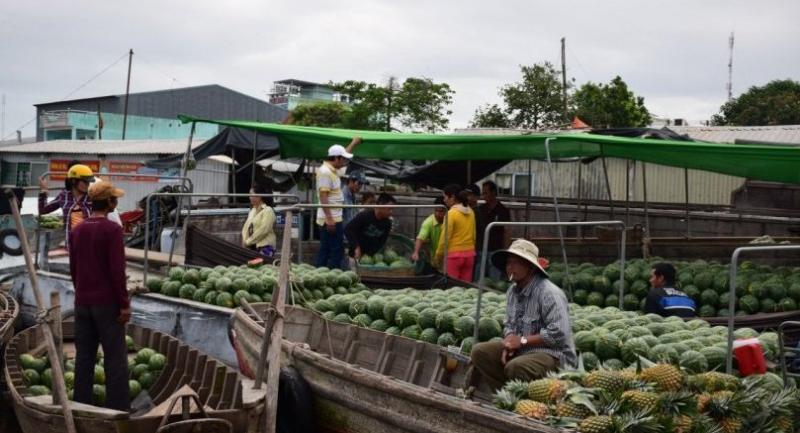 Farm products such as fruits and vegetable are traded at a floating market in Can Tho, the city in Mekong Delta where is affected by construction of dams upstream.

Dams built in the mainstream of the Mekong in China and Laos block the water flow, fish migration and sediment disbursal to downstream areas, they said.

The biggest impact is the reduction of the sediment load, which is having a serious impact on fisheries and agriculture, said independent environmentalist Nguyen Huu Thien.

The delta itself is the product of 6,000 years of sediment deposits, while the dams upstream stopped the sediment flow, he said. Unless there is enough sediment, the delta formation will stop and a reverse process will take place leading to erosion of the riverbanks and the coast, he said.

Sediment is essential to the fertility of the land, Thien said, adding that without enough sediment, the land would be degraded, affecting agricultural productivity.

A study has indicated that sediment deposits in the Mekong delta declined after the completion of Manwan dam in China in 1995, said Le Anh Tuan, a senior lecturer at Can Tho University’s College of Environment and Natural Resources. “Without sediment, the delta is sinking,” said Tuan, who is also vice director of Research Institute for Climate Change. “The primary data indicate that it is sinking two to three centimetres a year. With the dam, the sinking is more severe.”

China has completed seven dams in the mainstream of the Mekong since 1990s and plans to build many more. In lower portion of the river, Laos will finish its Xayaburi dam soon while Don Sahong is going on and Pak Beng is now in the pipeline.

While dam developers said that they had implemented mitigation measures to minimise the impacts on downstream basin, Thien argued that such measures had never been proven to be effective.

The measures such as a flushing system to release sediment do not work effectively, he said. “I don’t believe in the sediment flushing mechanism design because once you build the dam, you use the river for 100 kilometres as the reservoir and the sediment start depositing at the head of the reservoir 100km from the dam.”

“Technically, when you flush you keep the turbine clean only five to 10 kilometres from the dam but the sediment still deposits in the reservoir,” he said. Both Tuan and Thien called for cooperation between countries in the Mekong basin to mitigate of environmental impacts and the welfare of the delta.

“We need to be very careful in the decision-making and if you look carefully, the benefit from the dams will be very small compared to the impact to the environment for 60 million people living in the Mekong basin,” Thien said.

The inter-governmental body MRC was formed by 1995 Mekong Agreement but only countries in the lower basin – Laos, Thailand, Cambodia and Vietnam – are members. China and Myanmar are not.

While its regulations and procedures such as prior consultation process apply only to the members, such regulations are not effective enough to minimise the impacts from development projects, said Viet Hoang, a lecturer at Ho Chi Minh City University of Law.

The MRC cannot force the Lao government to comply with the agreement since it is difficult for the commission to enforce agreements over the national sovereignty, he said.

“I think the MRC needs to have an innovation, especially in dispute settlement mechanisms,” he said. “The 1995 agreement only uses diplomatic means to solve the problems between countries. It is not enough. We need to find other legal solutions.”

Hoang suggested other legal mechanisms including an international water law and utilising United Nations bodies to regulate the river.

“I think only legal measures cannot solve the problem so we need to find mixed solutions, but we need to base it on legality and … we need also political will from leaders of countries in the lower Mekong region,” he said.