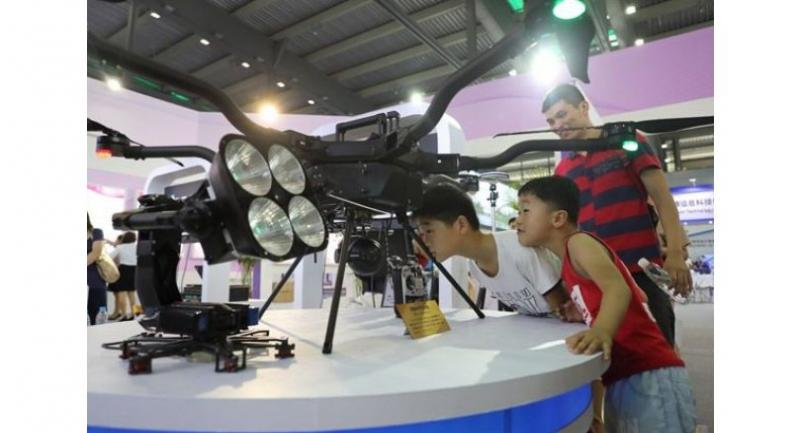 Children take a close look at an industrial drone at the 2017 World Internet of Things Wuxi Summit on Sept 10, 2017. [Photo by GAO ERQIANG/CHINA DAILY]

Driving in metropolis is never easy, but finding an open space can be more difficult in Chinese cities given that over half the demand for parking lots is not satisfied.

Thanks to the development of internet of things technology, drivers in Shanghai, however, are having an easier time. A driver can use an app to find an empty space in a parking lot, navigate to the location and pay the bill with a smartphone. Moreover, the app can calculate the probability of a space becoming empty by using information from the likes of parking ticket machines.

It is part of China’s broader push to gain a lead in the race toward the era of IoT, with the global market value of such subsystems — in equipment and Internet-connected things — projected to surpass $100 billion in 2018, according to Luo Wen, vice-minister of the Ministry of Industry and Information Technology, the top industry regulator in China.

IoT is the concept of connecting any electronic device to the Internet such as cellphones, coffee makers, washing machines, headphones and other wearable devices to streamline management and enhance efficiency.

He said that, bolstered by the government’s Made in China 2025 and Internet Plus initiatives, China has made strides in building the IoT’s infrastructure, commercial applications and technology advancements such as the narrow-band IoT.

China is in driver’s seat

Favourable government policies and fierce market competition inside the world’ s largest manufacturing powerhouse of electronics have already placed China in the driver’s seat in IoT adoption, according to Charlie Dai, principal analyst at consultancy Forrester.

“First, the government places great value on strategic IoT initiatives for the nation’s digital transformation, having inked IoT into its 13th Five-Year Plan, which steers China’s economic and social development between 2016 and 2020,” Dai said.

To be more specific, the Ministry of Industry and Information Technology unveiled a plan earlier this year to boost development of IoT, with the goal of enabling more than 1.7 billion public machine-to-machine connections by 2020. There were 100 million connections in 2015, accounting for 31 per cent of all global connections, official data show.

Beijing also selected a host of cities to pilot the smart city projects, through which they established database and sensor networks to collect, store, and analyse information related to transportation, electricity, public safety and environmental factors.

For example, in the city of Wuxi, a government-backed heartland for IoT adoption, the number of IoT-connected gadgets by the end of August had for the first time surpassed that of mobile subscribers, said Li Qiang, Party Secretary of Communist Party of China Jiangsu provincial committee.

“This is thanks to the full coverage of China’s narrow band IoT network four months ago across the city,” Li said. This marked another technical breakthrough that Wuxi has made since the city built the nation’s first high-standard all-optical network.

An IoT demonstration zone is also established in Wuxi’s Xuelang town, co-developed by the municipal government and tech giant Alibaba Group, to create synergies for the country’s wealthy Yangtze River Delta Region to push ahead with IoT technologies, he added.

The other driver is the competitive market in China, said Dai from Forrester, so firms in sectors from manufacturing to services have the impetus to improve product performance, better differentiate themselves from peers by using IoT technologies.

Billions to be spent

Since China makes so much of the world’s electronics, such as sensors, microchips and other electronic devices, it will form the backbone of the expanding IoT technology market. Market research firm IDC predicted that Chinese manufacturing spending on the IoT will reach $127.5 billion by 2020, with an average growth rate of 14.7 per cent.

“Around 28 billion devices will be connected to the internet by 2021 globally, among which 16 billion are related to the IoT. The technology is set to transform public infrastructure such as power grids, railways and ports, by making them interconnected and smart,” Luo said.

The smart parking solution in Shanghai is one of the typical application scenarios of IoT. It is enabled by the narrow-band IoT technology, which can connect billions of low-power devices such as smart meters, which transmit small amounts of bandwidth and may need to be deployed for many years without interference.

“Narrow band IoT is the latest IoT battlefield that global telecom carriers are scrambling for so they can establish a beachhead,” said Xiang Ligang, chief executive of telecom industry website Cctime.

“It can connect the internet of hidden things, such as water and gas metres that often lie in basements, deeply shadowed areas and even underground pipes, making large-scale connection really possible. China is leading global efforts in commercializing the technology.”

In a report published in May, the Ministry of Industry and Information Technology encouraged narrow band IoT’s commercial use in industrial internet and urban public service and management. It also supports smart factories and the internet of vehicles.

China Telecommunications Corp, the country’s third-largest telecom carrier by mobile subscriber base, said in May it had established a commercial narrow band IoT network with the widest coverage in the world. The company has upgraded 310,000 telecom base stations nationwide to support narrow band IoT connectivity.

About 1,200 narrow band IoT-enabled smart water metres have been deployed for Southern Pearl Garden and other residential areas in the Yantian District of Shenzhen. With a chipset inside, these smart water meters can intelligently read and upload data to Shenzhen Water’s online platform.

Liu Chang, a resident in Southern Pearl Garden, said the smart water avoids the service charge loss caused by false or missing metre reading and water loss from pipeline leakage. “I don’t have to wait at home for metre readers coming every month,” she said.

Rival China Mobile Communications Corp, the country’s largest telecom carrier by subscribers, is catching up. It unveiled the world’s smallest embedded SIM narrow band IoT module. The M5310, as the module is called, was independently developed by China Mobile. It is highly power-efficient and can save more than 30 per cent of the space of its nearest rival.

Near 100 companies are developing products based on the module to bring market innovation through narrow band IoT services, such as smart agriculture, smart parking, air-quality monitoring and asset management applications, according to China Mobile.