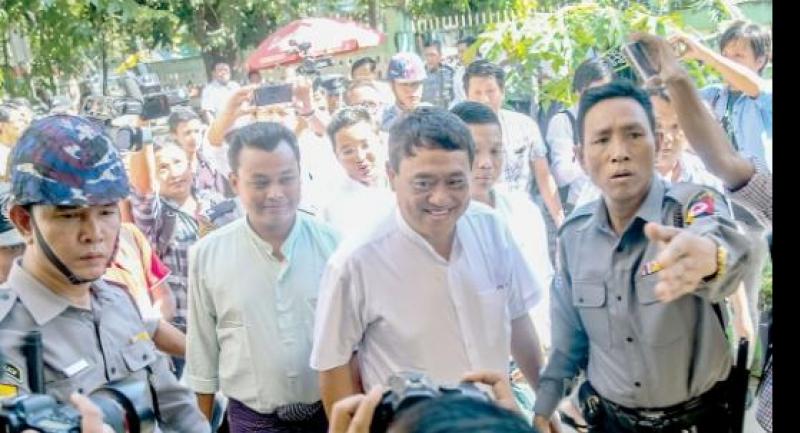 The first ever trial in the case of Eleven Media Group’s CEO Dr Than Htut Aung and Chief Editor Wai Phyo  versus the Yangon Region Government began on November 25 at Tamwe Township court.

The presiding judge Kay Thi Hlaing will decide whether the bail will be allowed on November 30.

The lawyers argued that while the defendants weren’t allowed bail, there was nowhere in the law that explicitly stated that bail cannot be granted, especially since it was for health reasons.

They also added that EMG had also paid over Ks 22,000 lakhs in taxes as well as that both CEO and Chief Editor have won numerous prestigious journalism awards making them honorable citizens in good standing with the law.

They stated that since the maximum sentence is three years, it is supported by other laws to allow bail and that the defendants are ready to provide any bail amount requested by the court.

“Today I have the authority to speak and the number one thing today is that this is the first trial and charges are under 66(d). We submitted with plenty of evidence that 66(d) in fact allows bail. Maung Maung Nyan Win from Pyay was allowed bail from 66(d) due to section 499 of penal code. It is the same for the owner of Kawe Journal in Bago. And when it comes to Dr Than Htut Aung, he is someone that’s already been allowed absence from trials by Pobbathiri court for health reasons and the same should be done here. We also submitted doctor’s reports. The court will decide on it on November 30 and how the case will then proceed depend on the plaintiff’s side. This is all I can say today,” said lawyer Kyee Myint.

CEO Dr. Than Htut Aung and Chief Editor Wai Phyo were charged under section 66 (d) of Telecommunications Law by Yangon Chief Minister Phyo Min Thein over an editorial article “ A year after the Nov 8 polls” written by Dr. Than Htut Aung at the Tamwe Township Police Station on November 9.

Amongst the article was, while never completely explicit, an accusation of corruption over an expensive Patek Phillippe watch.

Regarding the November 6th article, Yangon Region Government Committee sent a letter on November 7th to reply two questions. The letter asked for clarification regarding the published article.

In the afternoon of November 9th, the Yangon Region Government Committee held a press conference regarding the watch in question and stated that he will be suing.

Later, police from Tamwe Police Station arrived at the Office of Eleven Media Group at night of November 9 and presented summon.

The Yangon Region Government Committee not only took legal action against EMG’s article but also complained to the Myanmar Press Council. But the Council was unable to intervene as the lawsuit that was filed snagged with section 37 of the Media law.

Myanmar Press Council replied on November 10 that only after the current lawsuit is cancelled, it can take action.

Chief Editor Wai Phyo was awarded the 2011 Press Freedom Prize by the Reporters without Borders (RSF).

CEO Dr Than Htut Aug was awarded the 2013 Golden Pen award from WAN-IFRA, an international organization based in Paris, France comprised of newspaper owners and distributers across the globe.

Ever since both of the top chiefs of EMG was detained, organizations such as the WAN-IFRA, RSF, Amnesty International, Committee to Protect Journalists and Asia News Network have requested dropping all charges on CEO Dr Than Htut Aung and Chief Editor Wai Phyo.