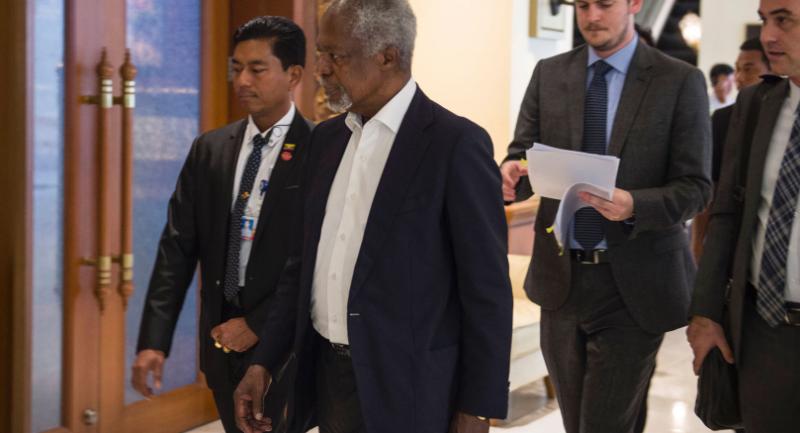 By The Nation,
Agence France-Presse

The United Nations has expressed alarm over violence against Muslim Rohingya, who may be victims of “crimes against humanity”, and UN staff have said the reputation of Aung San Suu Kyi’s government is at stake, as former UN chief Kofi Annan arrived in Myanmar for a trip that will include a visit to Rakhine state.

Following attacks by armed assailants against border security posts in October, the military’s response has reportedly been characterised by excessive use of force and other serious human rights violations against the Rohingya, including allegations of extrajudicial executions, torture, rape and the destruction of religious property.

“These allegations must be verified as a matter of urgency. If they are true, the lives of thousands of people are at risk. The reputation of Myanmar, its new government and its military forces is also at stake in this matter,” said Adama Dieng, the UN Special Adviser on the Prevention of Genocide.

About 30,000 people have fled their homes and analysis of satellite images by Human Rights Watch found that hundreds of buildings in Rohingya villages have been razed.

Myanmar has denied allegations of abuse, saying the army is hunting “terrorists” who are behind raids on police posts last month.

The government has lashed out at media reports of rapes and killings, and lodged a protest against a UN official in Bangladesh who said the state was carrying out “ethnic cleansing” of Rohingya.

Meanwhile, Nay Pyi Taw reacted angrily to a statement made by a UN official regarding “ethnic cleansing”, saying the official “not only breached the code of conduct of UN personnel, but also undermined the trust and confidence placed in and the cooperation extended to the UNHCR by Myanmar”.

The government has lodged a complaint over the statement with the UNHCR in Geneva since last week, according to Myanmar Eleven.

The UN official urged the Myanmar government and the military to heed requests by the UN – and many other parties across the world – to authorise access and an immediate and thorough independent investigation into incidents reported in Rakhine.

Dieng reminded Suu Kyi’s government, which took office early this year after a landslide victory in 2015 election, of the trust placed in the government by the international community as Myanmar transitions to democracy.

“Myanmar needs to demonstrate its commitment to the rule of law and to the human rights of all its populations. It cannot expect that such serious allegations are ignored or go unscrutinised,” he said in a statement.

The UN official also urged Bangladesh not to close its borders to refugees fleeing Myanmar. “Closing the border, deporting refugees or failing to provide assistance, exposes these populations to further violence that could, in the worst case, constitute international crimes,” Dieng said.

On Tuesday, the Office of the UN High Commissioner for Human Rights (UNHCHR) said Myanmar’s treatment of the Rohingya could be tantamount to crimes against humanity, reiterating the findings of a June report.

“The government has largely failed to act on the recommendations made in a report by the UN Human Rights Office ... [that] raised the possibility that the pattern of violations against the Rohingya may amount to crimes against humanity,” the UNHCHR said in a statement.

Amid the mounting crisis, former UN chief Annan on Tuesday began a week-long visit to Myanmar that will include a trip to Rakhine.

Suu Kyi in August appointed fellow-Nobel laureate Annan to head a special commission to investigate how to mend bitter religious and ethnic divides that split the impoverished state.

Annan, who won a Noble Peace Prize in 2001, has expressed “deep concern” over the violence in Rakhine, while thousands of angry Muslims have taken to the streets across Asia in protest.