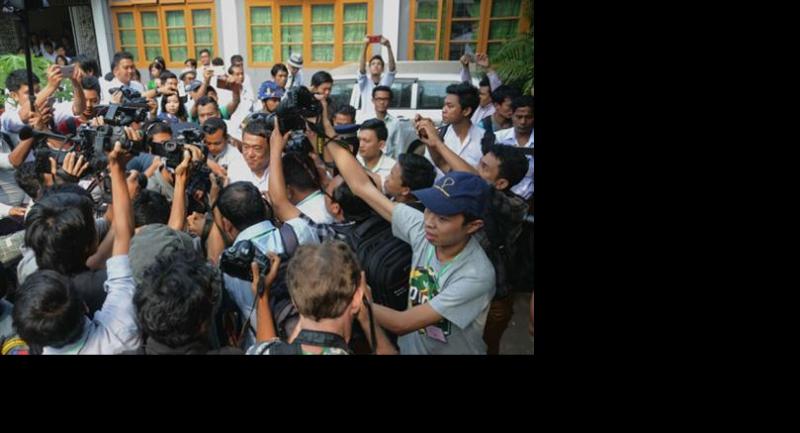 The appeal included the fact that the CEO suffered a heart attack in Insein Prison two days ago and did not get immediate health care. His life was in danger, the legal team argued, adding that Section 66(d) of the Telecommunication Law did not state that bail could not be granted to defendants. The EMG had already paid about Ks2.2 billion in taxes, they said.

Dr Than Htut Aung was awarded the 2013 Golden Pen award from the World Association of Newspapers and News Publishers (WAN-IFRA). Wai Phyo won the 2011 Press Freedom Prize from Reporters without Borders (RSF).

Kyee Myint said: “The judge refused to grant bail because the medical notes submitted are not from a government hospital. Mandalay Region court already granted bail to him based on these medical records. The Mandalay court has more authority than this township court. Doctors who issue these recommendations are still working at government hospitals. Dr Khin Maung Myint, who is providing medical care for President Htin Kyaw, and Dr Lwin Tin Aye from North Okkalapa Hospital gave these reports.

"Dr Than Htut Aung is suffering from heart disease. Now he is attending the prison hospital. If necessary, we have a plan to complain at a higher court. Under Section 497 defendants shall be granted bail if they face offences punishable with fewer than seven years in prison," Kyee Myint said.

"Media staff are not murderers and rapists. Action taken under Section 66(d) is totally wrong. They should be charged under the Media Law. It is obvious that the executive misuses this section to threaten the media. The next court hearing is scheduled for December 9,” he added.

The duo were charged over an editorial, “A year after the Nov 8 polls”, written by Dr Than Htut Aung in early November.

Yangon Region government demanded to know who was the rich man who allegedly gave a valuable Patek Philippe watch to a minister after recently being released from jail. He was reportedly jailed for involvement in a drugs case and then received approval from the government to build a new city project.

On November 9, Yangon Chief Minister Phyo Min Thein told a press conference that he would sue the pair.

Media groups and NGOs, including WAN-IFRA, RSF, Amnesty International, the Committee to Protect Journalists and Asia News Network, have demanded their freedom.

On November 30, the Myanmar Press Council said it did not want to interfere in the legal process but said it hoped for a warm, cordial and harmonious relationship between the government and media.