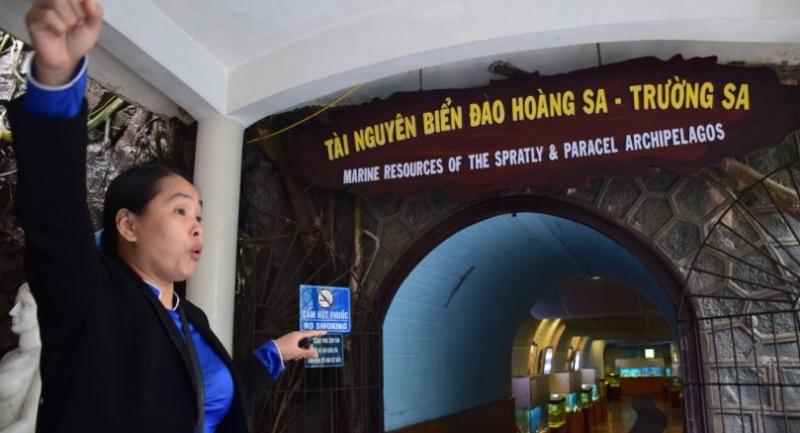 An official at the Institute of Oceanography shows an aquarium displaying species collected from the South China Sea. The institute renovated a transport tunnel made by France in the colonial era to create the aquarium, which is open to the public.

The third of a four-part series on the South China Sea. The Nation’s Supalak Ganjanakhundee reported from the key Vietnamese cities of Danang, Khanh Hoa and Ho Chi Minh on how the country views the contentious sea.

The key message of the exhibition is not only the value of scientific work about the environment and ecology in the sea but also sovereignty over the Paracel and Spratly archipelagos since the colonial era.

Countries in Southeast Asia such as Vietnam have had territorial disputes with China over the South China Sea, notably the two archipelagos, for years. The conflict has developed into tension and confrontation several times.

For the Vietnamese, protection of the South China Sea which is known locally as East Sea, is a national duty as they consider the sea and the islands as their territory. Many people in Vietnam told The Nation that they were prepared to protect the contentious sea with their lives. Vo Si Tuan, an associate professor on marine biology and director of the Institute of Oceanography

For scientist Vo Si Tuan, an associate professor on marine biology and director of the Institute of Oceanography, protection of the sea could be done in different ways, but the best choice would be in cooperation with countries in the region to use science and technology to save its marine life.

Vietnam has been doing this work since it was under France’s rule last century, and it urges all countries bordering the South China Sea to create a network of marine protected areas, he said. Marine protection areas basically restrict human activity for conservation purposes, usually to protect natural or cultural resources.

Established in 1922, under the French name of Service des Peche de I’Indochine, which was changed in 1930 to the Insitut Oceano-graphique de I’Indochin, the institute has implemented many studies that contribute significantly to the exploitation and conservation of the South China Sea, he said.

More than 90 years ago, there were many research expeditions undertaken in the South China Sea in areas like the Tonkin Gulf, central and southern coasts, the Gulf of Thailand and Tonle Sap Lake in Cambodia, he said.

“The French scientists considered the Paracel and Spratly islands as important and, interestingly, made significant scientific discoveries, such as [of] coral reefs in the South China Sea. They also studied the geology and biodiversity in these areas,” he said.

Beside research and cooperation with foreign and international institutes, the Museum of Oceanography has collected and preserved more than 20,000 samples of marine organisms from the South China Sea for study and exhibition.

Tuan himself has long experience working with international scientific organisations such as United Nations environmental programmes. He coordinated one South China Sea project in particular.

“Research trips and studies by our institute showed that the Spratly Islands are very important for fishery resources and diversity in the South China Sea,” he said, noting that coral reefs were very important as a spawning nursery for marine organisms and a key fishery.

The South China Sea and its archipelagos are in danger because of over-exploitation, busy sea traffic and the building of artificial islands, he said. Other major threats were the loss of habitat and degradation of coral reefs, sea grass beds and mangroves along coastal areas.

The building of artificial islands and land reclamation were now being discussed among scientists and environmentalists, he said, adding that the burying and damage to coral reefs has created serious environmental management concerns.

But there were some solutions at local, national and regional levels to save the South China Sea, Tuan said.

Vietnam is now working to set up maritime parks to protect biodiversity and fishery resources, he said. The country has established 16 marine protection areas, including seven in its Exclusive Economic Zone, and he said the government had approved another in the Spratly Islands, with the plan to be implemented soon.

“Another solution is more difficult but we have to consider having an agreement among countries bordering the South China Sea on environmental protection including biodiversity so countries are able to work together,” he said.

The idea could be implemented with the Asean framework, he said, noting that the Philippines and Indonesia were the most active in this field.

“There was an initiative a long time ago – in 1992 – to develop a marine park in the South China Sea, but it was just an idea. And I know the Philippines also has a proposal to have a protected area in the southern part of the Spratlys.”

Vietnamese scientists have suggested that the southern part of the South China Sea should be turned into a protected area. “At different levels and times, scientists have made a number of recommendations on setting up protected areas in the South China Sea. But we still have challenges to turn that initiative into reality. So we need more cooperation, as it is not easy for an individual country to do such a thing,” he said.

For scientists who are concerned about maritime diversity and the environment, cooperation is possible if leaders of countries in the region have strong political will, he added.

Tuan said his institute has cooperated with foreign and international organisations for a long time. One of the more recent examples was the Philippines-Vietnam Joint Oceanographic and Marine Scientific Research Expedition in the South China Sea from 1996 to 2007, he said.

The main objectives of the project were to boost goodwill between leaders of the two countries through marine scientific cooperation in the South China Sea as well as raise understanding about the nature of the marine environment and resources, especially in the Spratly Islands.

The first expedition was hosted by the Philippines and conducted from April 24 to May 9 in 1996. Before the cruise, then-president Fidel Ramos welcomed research teams from Vietnam and the Philippines at the presidential palace, where he emphasised the significance of the expedition to strengthen the friendship and cooperation between the two countries, as well as to resolve disputes in the South China Sea peacefully, Tuan said.

He added that the final trip was conducted from April 17 to 29 in 2007 by the two countries to research marine physics, chemistry, geology, the environment, plankton, marine biodiversity and toxins on Spratly Island, which gives the entire archipelago its name.

“The project has ended and we recently discussed having further cooperation in Asean with more countries within the Asean framework,” he said.

Tuan said his institute had also cooperated with China but that was limited to areas in the Tonkin Gulf to study geology and sediment transportation from rivers to the sea. Further cooperation would be possible when relations allow it, he said.