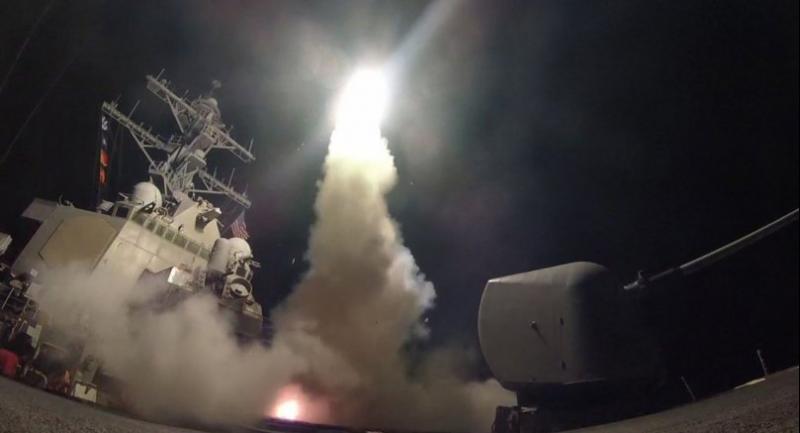 In this image released by the US Navy, the guided-missile destroyer USS Porter conducts strike operations while in the Mediterranean Sea, April 7.//AFP

Paris - From strong messages of support to fierce condemnation, here are the main global reactions to a US strike on a Syria air base in response to a suspected chemical attack.

RUSSIA: Unsurprisingly, the main ally of Syrian President Bashar al-Assad was robust in its opposition to the strike. The strikes were an "aggression against a sovereign state in violation of international norms," the Kremlin said in a statement.

The action has inflicted "considerable damage" to already "lamentable" US-Russia ties, it added. As a first practical response, Moscow said it would "halt" its deal with the US to avoid clashes in Syrian airspace. Russia also called for an urgent UN Security Council meeting following the strikes.

IRAN: The Iranian regime, another Syrian ally, "strongly condemned" the strike, just as it condemned "all unilateral military action". It said the US action was taken under the "pretext" of the chemical strike.

BRITAIN: The close American ally said it "fully supported" the strikes, judging them an an "appropriate response to the barbaric chemical weapons attack". It said the strikes were "intended to deter further attacks.

TURKEY: Nato ally Turkey, which is a key player in the Syria conflict and has endured choppy relations with Washington recently, welcomed the strikes as "positive."

The deputy foreign minister added: "We believe that the Assad regime must be punished completely in the international arena." Turkey called for a no-fly zone in Syria in the wake of the US strike.

SAUDI ARABIA: A foreign ministry official hailed US President Donald Trump as "courageous" for taking action when "the international community has failed to put a halt to the regime's actions."

ISRAEL: Prime Minister Benjamin Netanyahu said Israel "fully supports" the "strong and clear message" sent by the air strikes. He added that the message should "resonate not only in Damascus, but in Tehran, Pyongyang and elsewhere."

JAPAN: Prime Minister Shinzo Abe said that Japan "supports the US government's resolve that it will never tolerate the spread and use of chemical weapons."

SYRIAN REBELS: A leading Syrian rebel group said one strike was "not enough", adding that there were "26 airbases that target civilians."

CHINA: Beijing offered a nuanced reaction, saying it was "urgent" to avoid "further deterioration of the situation." A foreign ministry spokeswoman added: "We oppose use of chemical weapons by any country, organisation or individual in any circumstance, for any purpose."//AFP