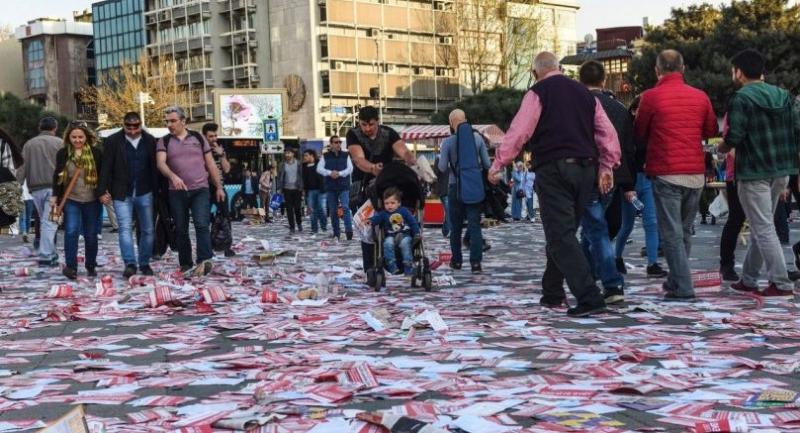 A man pushes a child in a stroller as he walk on leaflets reading "yes" thrown on the ground at the Kadikoy district, in Istanbul, after the start of the election banning, on April 15, 2017, on the eve of the constitutional referendum. / AFP PHOTO

ISTANBUL - Turkey on Sunday began voting in a referendum on expanding the powers of the head of state under President Tayyip Erdogan that will determine its future political destiny but whose outcome remains in doubt after a bitterly-contested campaign.

Over 55.3 million Turks are able to vote in the referendum on sweeping changes to the president's role which, if agreed, would grant Erdogan more power than any leader of Turkey since its founder Mustafa Kemal Ataturk and his successor Ismet Inonu.

Polling stations opened in Diyarbakir and other cities of eastern Turkey at 0400 GMT, an AFP correspondent said, with voting in Istanbul, Ankara and other cities getting underway an hour later.

Opinion polls, always treated with caution in Turkey, predicted wildly divergent scenarios with analysts saying the outcome remains too close to call despite the clear advantage in resources and airtime enjoyed by the 'Yes' campaign.

As the rival sides held rallies up until the last hour of legal campaigning Saturday to sway undecided voters, Erdogan confidently predicted that the 'Yes' camp had victory in the bag.

But he urged people not to succumb to "lethargy" in voting, saying "the stronger result the better".

"A 'Yes' that emerges from the ballot box with the highest margin will be a lesson to the West," he said in the Istanbul district of Sariyer, the last of a stamina-busting sequence of rallies.

If passed, the new presidential system would dispense with the office of the prime minister and centralise the entire executive bureaucracy under the presidency, giving Erdogan the direct power to appoint ministers.

The system would come into force after November 2019 elections. Erdogan, who became president in 2014 after serving as premier from 2003, could then seek two more five-year mandates.

But it could also have even wider implications for the key NATO member, which for the last half century has set its sights on joining the European Union.

Erdogan has warned Brussels that in the event of a 'Yes' vote he would sign any bill agreed by parliament to reinstate capital punishment, a move that would automatically end its EU bid.

Western reactions to the referendum outcome will be crucial, after Erdogan accused Turkey's allies of failing to show sufficient solidarity in the wake of the July 15 failed coup.

Sinan Ekim and Kemal Kirisci of the Brookings Institution think-tank said in a report the changes if agreed "would set in motion the most drastic shake-up of the country's politics and system of governance in its 94-year-long history".

'Bus with no brakes'

The opposition has cried foul that the referendum has been conducted on unfair terms, with 'Yes' posters ubiquitous on the streets and opposition voices squeezed from the media.

The poll is also taking place under a state of emergency that has seen 47,000 arrested in an unprecedented crackdown after the botched putsch.

The standard-bearer of the 'No' camp, Republican People's Party (CHP) leader Kemal Kilicdaroglu, warned at his final rally that Turkey was deciding if "we want to continue with the democratic parliamentary system or one-man rule".

He described the new system as "a bus with no brakes and whose destination is unknown".

Key factors influencing the result will include whether the ruling Justice and Development Party (AKP) can perform the delicate balancing act of bringing both nationalists and conservative Kurds behind the new system.

After a slew of attacks over the last year blamed on Kurdish militants and jihadists, security is set to be a major issue on polling day.

Authorities in Istanbul on Friday detained five people suspected of planning an attack on polling day, following the arrest of 19 alleged Islamist extremists in the Aegean city of Izmir earlier in the week.

The Dogan news agency said a total of 49 IS suspects had been detained in Istanbul alone over the last week.

More than 33,500 police officers will be on duty in Istanbul alone on referendum day, according to Turkish media.