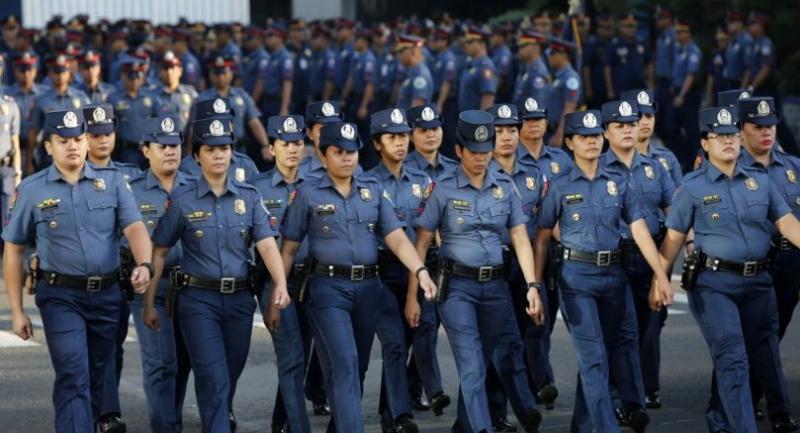 Members of the Philippine National Police march in formation inside the national police headquarters in Quezon city, east of Manila, Philippines, on April 24.//EPA

Philippines police have been placed on the highest alert in preparation for the 30th Asean  summit this week in Manila to be attended by the leaders of member nations.

A total of 40,877 personnel from 21 different government agencies – 27,425 from the police – were mobilised for the security of the summit from tomorrow until Saturday.

“We are putting our best foot forฌward in this historic national event,” dela Rosa said in a prepared stateฌment he read during a press conferฌence in Camp Crame.

“We have rehearsed and finetuned all our systems and proceฌdures for this event, such that we have established a full backup sysฌtem that will address any unforeseen situation that may arise,” he said.

“We are not leaving anything to chance in our preparations and we have drawn contingencies for every foreseeable scenario,” dela Rosa said.

The personnel to be deployed will provide security and assistance to the delegates from the Aseanmemฌber nations, dialogue partners, observer states and their respective delegations.

Meanwhile, Ambassador Marciano Paynor Jr, directorgeneral for operaฌtions of the Asean 2017 National Organising Council, said the governฌment did not want a repeat of the terฌror attacks in Western capitals in recent years to happen in Manila durฌing the regional summit.

“We can no longer consider only domestic security issues. As we all know, European capitals – London, Paris, Brussels – they all have had very serious terrorists attacks,” Paynor said.

“We have been lucky thus far. We would not want any of these things happening here, especially if we have guests and especially as we are hostฌing these Asean meetings throughฌout the year,” he said.

‘Paid to be paranoid’

Undersecretary Catalino Cuy, the officer in charge of the Department of Interior and Local Governments, said authorities were not aware of any specific threat so far against the summit but were taking general preฌcautions to be safe.

“There is no specific threat but we are paid to be paranoid. In our preparations, we consider all possiฌble threats to activities,” Cuy said.

“As we said earlier, this is only meeting number 56. There are a total of 139 meetings, so we have twothirds more to come and every sinฌgle one of these meetings we treat the same,” he added.