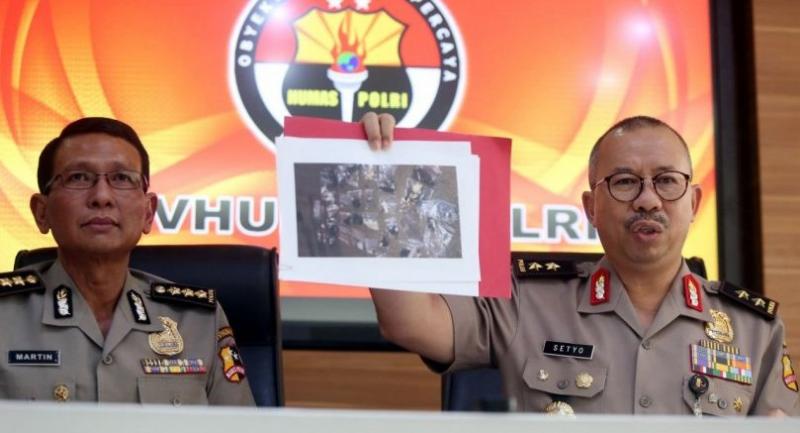 Indonesian police spokesmen Setyo Wasisto (R) and Martinus (L) show a photograph of gathered material collected as evidence from a suicide bombing site, during a press conference in Jakarta on May 25.//AFP

Jakarta - The Islamic State (IS) group has claimed responsibility for a twin suicide bombing at a Jakarta bus terminal that killed three policemen, the latest attack to hit Indonesia as it faces a surge in terror plots.

Analysts described the claim as credible and said they believed Jamaah Ansharut Daulah (JAD), a local network of IS-linked militants, carried out the bombing.

Two suicide bombers attacked the busy terminal in the capital late Wednesday in a dramatic assault that sparked panic and left human body parts and shattered glass strewn across the street.

Three policemen were killed, and five other officers and five civilians injured in the bombing at the Kampung Melayu terminal. Authorities Thursday raided the houses of the suspected bombers, and found Islamic teaching materials and bladed weapons.

IS propaganda agency Amaq said late Thursday that the "attack on the Indonesian police gathering in the city of Jakarta was carried out by one of the fighters of the Islamic State", in a statement carried by the SITE Intelligence Group.

Hundreds of radicals from Indonesia, the world's most populous Muslim-majority country, have flocked abroad to fight with IS, and the country has seen a surge in plots and attacks linked to the jihadists over the past year.

Police have said they believe that IS is linked to the attack, but have given no further details. They would not comment directly on the IS claim of responsibility.

She said she believed that the branch of JAD based in Bandung, a city on the main island of Java, had carried out the bombing.

Al Chaidar, a terrorism expert from the University of Malikussaleh in Indonesia's Aceh province, said he also thought the claim credible.

JAD was designated a terrorist organisation by the United States in January, which said the network was an umbrella group for about two dozen extremist outfits.

Some have pointed the finger at the group for carrying out a suicide and gun attack in Jakarta in January last year that left four assailants and four civilians dead, and was also claimed by IS.//AFP