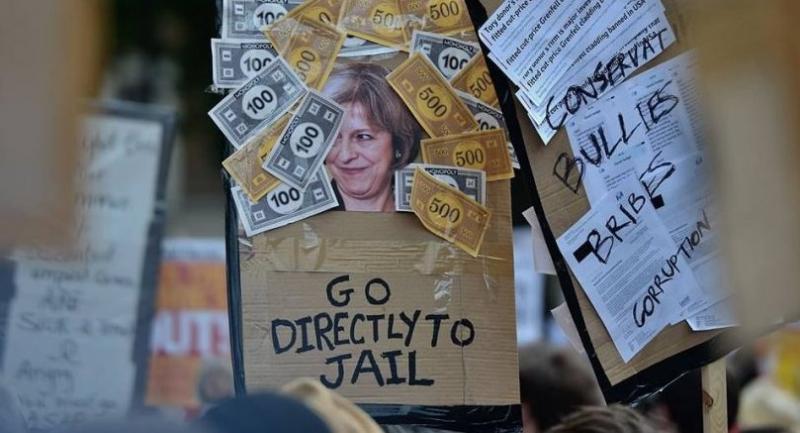 Demonstrators hold placards and chant during an anti-Conservative Party Leader and Britain's Prime Minister Theresa May, and Democratic Unionist Party protest, on Whitehall, opposite the entrance to Downing Street in central London on June 17./AFP

LONDON- Britain begins historic talks Monday on leaving the European Union while still mourning the victims of a devastating fire and reeling from an election that has badly weakened the government.

Brexit minister David Davis will travel to Brussels to meet Michel Barnier, the EU's chief negotiator, to kick off hugely complex withdrawal negotiations that are expected to conclude within two years.

Worried by immigration and loss of sovereignty, Britain last year voted to end its decades-old membership of the 28-country bloc -- the first state ever to do so -- in a shock referendum result.

The government has developed a strategy of so-called "hard Brexit": leaving the European single market and the customs union in order to control immigration from the EU.

But that entire approach has come under question following the June 8 general election in which Prime Minister Theresa May lost her centre-right Conservative party's parliamentary majority.

May has clung on to power but has so far failed to conclude an agreement with Northern Ireland's ultra-conservative Democratic Unionist Party that would bolster her ability to govern.

The Conservatives now have only 317 MPs in the 650-seat House of Commons and need the support of the DUP's 10 MPs to command a razor-thin majority.

The government is due to present its legislative programme at the opening of parliament on Wednesday, which will be followed by a key confidence vote several days later.

Adding to what Queen Elizabeth II called the "sombre national mood" have been three terrorist attacks in three months and a fire in a London tower block in which 58 people are presumed dead.

The government's current weakness has fuelled criticism of its approach to Brexit and given rise to notions that the government might pursue a softer tone.

Some Conservatives have called for a more inclusive approach that would include opposition parties as well as stronger voices from Scotland and Northern Ireland, where a majority of voters backed Britain to stay in the EU.

Scottish Conservative leader Ruth Davidson, who is newly influential after winning a crucial 13 seats in Scotland, has said Britain should prioritise "freedom to trade and our economic growth".

But finance minister Philip Hammond confirmed Sunday that Britain would still be leaving the EU, the single market and the customs union.

"We will leave the customs union when we leave the European Union. That's a statement of legal fact," he told BBC television.

He said he wanted post-Brexit trade with the EU that was not just free from tariffs but also delays and bureaucracy.

But Hammond said transitional arrangements would be necessary, to give business greater certainty.

"If we're going to radically change the way we work together, we need to get there via a slope, not via a cliff edge," he said.

Monday's negotiations are to start in Brussels at 11 am (0900 GMT) with 90 minutes of talks between Barnier and Davis, followed by a working lunch between the pair, and a press conference.

Working groups will be set up to focus on three key areas -- the status of EU citizens living in Britain and British citizens living in the EU; the divorce bill for Britain; and the future of the Northern Irish border with EU member Ireland.

Britain and the EU are already at odds over the order of the talks, with London insisting future trade ties should be discussed at the same time as the divorce despite opposition from Brussels.

And Hammond described the divorce bill figures being bandied around in Brussels as "the most egregious pre-negotiation posturing".

The negotiations have been called the most complex in Britain's history as it unravels 44 years of membership and its threat to walk out with no deal in place has worried European capitals.

No deal would be "very, very bad" for Britain, Hammond said, but worse would be a deal "deliberately structured to punish us, to suck the lifeblood out of our economy".

The chancellor said he would reject any deal "designed to destroy us".

The government on Saturday said parliament would hold a special two-year session starting this week, sitting for double the normal time to allow it to overhaul EU legislation.

International Trade Minister Liam Fox will travel to Washington on Monday to explore new trade ties -- although no formal negotiations are possible until Britain has actually left the bloc.