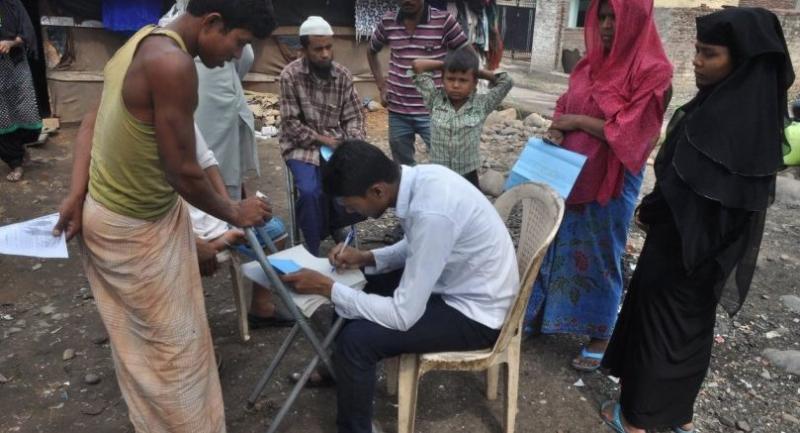 A UNHCR (United Nations High Commissioner for Refugees) aid worker gathers details about the Rohingya muslim refugees from Mayanmar at a makeshift camp on World Refugee Day in the outskirts of the Indian city Jammu on June 20, 2017. /AFP

DHAKA - In squalid camps in Bangladesh, hundreds of thousands of Rohingya who have fled violence and persecution in neighbouring Myanmar dream of a better life abroad -- and rely on increasingly high-tech trafficking networks to get them there.

Dhaka denies new arrivals refugee status and, after a major crackdown sealed off the ocean routes traditionally used to traffic migrants to Southeast Asia, many Rohingya are turning to complex smuggling operations to escape Bangladesh.

"Those who have money or gold ornaments are paying smugglers to get them out by air, and those who don't are trying roads."

The Rohingya, who live mainly in Myanmar, are one of the most persecuted minorities in the world.

Many now live in grinding poverty in Bangladesh's southeast coastal district of Cox's Bazar, packed into camps that were home to more than 300,000 Rohingya even before some 70,000 new arrivals poured across the border after the Myanmar army launched a bloody crackdown last October.

Bangladesh denies them the right to work, and is proposing to rehouse them on a mosquito-infested island that regularly floods at high tide.

For years, rickety boats were the main mode of escape for the refugees who would pay hefty amounts to smugglers to get them to Malaysia and Thailand.

Those routes were cut off in 2015 when mass graves of would-be migrants, many of them killed at sea, were discovered in Thailand, triggering a global outcry and a major crackdown on traffickers.

But the smuggling networks swiftly identified new routes out of Bangladesh by air and road, using mobile payments to operate internationally.

"I paid a local friend for a Bangladeshi passport and other papers. He also helped me pass through the immigration," Mohammad told AFP using the WhatsApp messaging service. He asked that his family name not be used.

As it becomes more difficult for migrants to leave Bangladesh, many have been forced to head to destinations once considered less appealing.

Those who cannot afford flights are using buses and even travelling on foot to escape Bangladesh, going to India before moving on to Nepal or Pakistan. Some have even settled in the troubled Kashmir region.

There is no reliable data on the value of the trafficking trade, but estimates suggest it is worth millions of dollars in Bangladesh alone.

These networks arrange fake Bangladeshi passports and birth certificates for the Rohingya, a stateless ethnic minority denied citizenship rights in Myanmar even though they have lived in the Buddhist-majority nation for generations.

"It's unbelievable how deep the traffickers' grassroots network is and how smoothly they operate across nations," said Shakirul Islam, head of a migrants' welfare organisation called Ovibashi Karmi Unnayan Program.

Migration expert Jalaluddin Sikder said a proliferation of mobile phone money transfer services in Bangladesh was making it easier for the traffickers to do business internationally.

"They are efficient in distributing the money to all the key players," said Selim Ahmed Parvez, researcher for the Manusher Jonno Foundation (MJF).

These, he said, range from "local trafficking agents, to law-enforcing officers, administrative officials, politicians and the kingpins".

The Rapid Action Battalion (RAB), an elite force fighting militancy and organised crime in Bangladesh, told AFP they were working to stop Rohingya being smuggled out of the country.

"It (trafficking) is happening here and we're trying hard to identify the routes and the channels the smugglers use," said Nurul Amin, RAB commander for Cox's Bazar.

But tracking down the smugglers is only half the battle.

Fears are rising in the camps over a proposal to move the estimated 400,000 Rohingya to a desolate island in the Bay of Bengal -- a fate many say they would do anything to avoid.

"We've successfully tackled the boat migration. And now our focus is on other smuggling routes," said the RAB's Amin.

"But if someone is so desperate to migrate, can you stop him?"