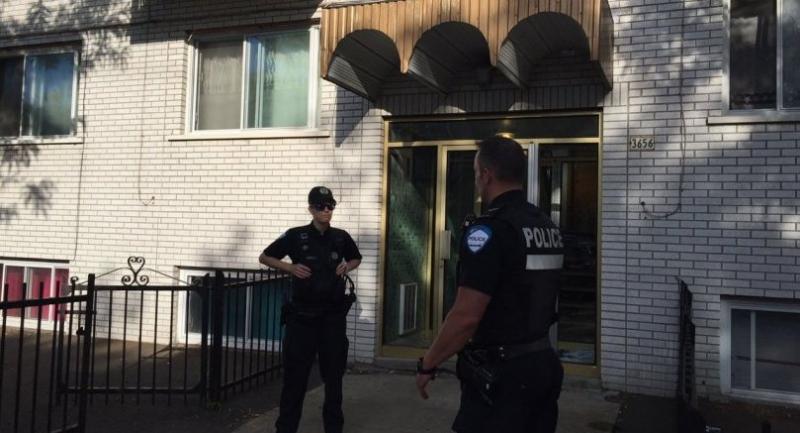 Montreal Police guard the front of the four storey building in Montreal on June 21, 2017, where Amor Ftouhi, who is suspected of stabbing a Michigan airport police officer, lived before traveling to the US earlier this month. // AFP PHOTO

CHICAGO - A knife attack on a Michigan airport police officer on Wednesday by a man yelling "Allahu Akbar" is being investigated as an act of terrorism, the FBI said.

The stabbing at Bishop International Airport, in the city of Flint, comes amid a wave of jihadist-inspired attacks in Europe, most recently a foiled bomb assault at a train station in Belgium.

US officials identified the suspected assailant, who is in custody and cooperating with investigators, as a 49-year-old Canadian resident from Quebec named Amor Ftouhi.

Ftouhi was seen lingering with luggage around the airport's non-secured public areas, including at a second-floor restaurant and a bathroom, before pulling out a 12-inch serrated-blade knife, yelling "Allahu Akbar" -- "God is greatest" in Arabic -- and stabbing an officer in the neck, police said.

During the attack, Ftouhi "referenced killings in Syria, Iraq, and Afghanistan," according to a press release from the US Attorney's Office for the Eastern District of Michigan.

He also expressed "hatred for the United States" during questioning in custody, Gelios said.

"He was cooperative and has talked to us about what his motivations were," he added.

Neville wrestled Ftouhi to the ground during the assault until others could arrest him, police said. He was hospitalized and is in a stable condition.

No passengers were harmed in Wednesday's assault, Bishop International officials said. The airport was evacuated and remained closed until 5 pm (2100 GMT).

Ftouhi faces charges of committing an act of violence at an airport, and is expected to appear at a federal court in Flint.

US Attorney General Jeff Sessions said in a statement that an attack on law enforcement would be "investigated and prosecuted to the fullest extent of the law."

"President Trump has prioritized the safety of all law enforcement officers, and this Department of Justice is committed to that goal," he said.

Ftouhi's Canadian citizenship led to joint operations in Canada and the US, as authorities probed the incident.

Canadian media reported that police searched Ftouhi's home in Montreal and made three arrests in connection with the attack.

Police had cordoned off the four-story building where Ftouhi reportedly lives, in the Rosemont area of Montreal.

"We are investigating all of the details," said Canada's Public Safety Minister Ralph Goodale. "Obviously Canada condemns this heinous and cowardly attack."

Since the US investigation is ongoing, "it is impossible for us to confirm or identify any suspects whatsoever," added Montreal police spokesman Benoit Boisselle.

"We're trying to develop further information as to his timeline and where he went after he entered the United States," he said.

Flint is near the Detroit area, home to a large Muslim-American community. Michigan Governor Rick Snyder responded to news of a possible link to terrorism by sounding a note of caution.

"Even with this attack, we must continue to balance our need for increased security with understanding and tolerance," Snyder tweeted.

The stabbing comes the day after a suspect with apparent jihadist sympathies set off a bomb in a foiled attack at a Brussels train station.

A day earlier in Paris, a suspected Islamist on a terror watch list rammed a car laden with weapons into a police vehicle, and a man drove a van into a group of Muslims near a London mosque.

In this latest incident, the FBI's Gelios said the Flint attacker was unknown to authorities.

"Preliminary indications are we had no visibility on this individual," he said.