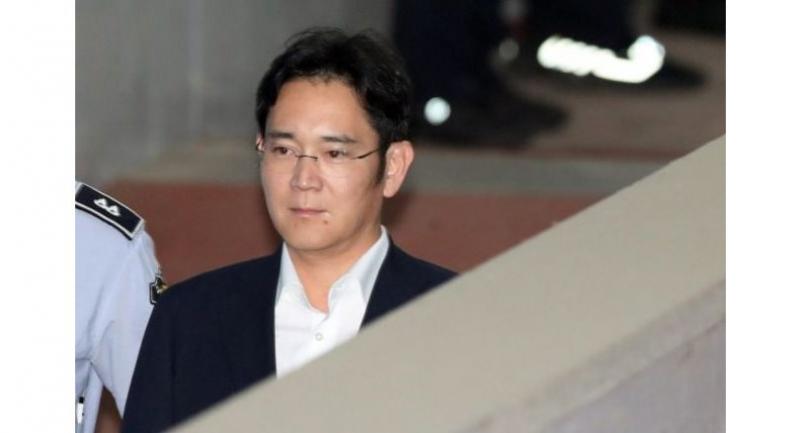 Lee Jae-yong, vice chairman of Samsung Electronics Co., enters the courthouse in Seoul on Aug. 7, 2017, for his trial over bribery and other charges in connection with former President Park Geun-hye. (Yonhap)

SEOUL - Lee has been on trial since April 7 on charges of bribery, embezzlement and perjury.

The prosecution on Monday asked a Seoul court to sentence Samsung Group’s heir apparent Lee Jae-yong to 12 years in jail for alleged bribery in connection with the corruption scandal that led to former President Park Geun-hye’s ouster. The court will rule on Aug. 25.

At the final hearing held at the Seoul Central District Court, Special Counsel Park Youg-soo said that the Samsung Electronics Vice Chairman was a direct beneficiary and final decision maker in the bribery scheme.

“Samsung Group voluntarily offered funds rather than gave in to former President Park’s threats, expecting to get help in the firm’s leadership transfer, after it received a request from Park,” he said during the hearing, calling it “a typical case of crony capitalism.”

Lee has been on trial since April 7 on charges of bribery, embezzlement and perjury for allegedly seeking political favors from the Park administration in return for paying or promising to pay 43.4 billion won in donations to foundations controlled by Park’s close confidante Choi Soon-sil and in sports sponsorship to Choi’s horse-riding daughter.

Special Counsel claimed that the money was a bribe to win the government’s backing for the 2015 merger of Samsung Group’s two affiliates – Cheil Industries and Samsung C&T – a crucial step for a smooth leadership transition from its ailing chairman Lee Kun-hee to his only son, Lee Jae-yong.

Former President Park, in return for the money, is suspected of have pressured the state-funded National Pension Service, the largest stakeholder in Samsung C&T, to vote in favor of the controversial merger.

“I have never expected or asked for favors for my private interest,” a tearful Lee said, in his final remark during the hearing. “Also... How would I touch our Korean ordinary people’s retirement pension, even if I am so foolish?”

Lee has maintained that he had not been involved in making decisions to offer donations to the Choi-controlled entities, had no favors to ask for in return and was not even aware of Choi and her daughter Chung Yoo-ra’s existence.

Lee’s lawyer called Samsung Group, the nation’s top conglomerate, a “victim.” He dismissed the counsel team’s accusations as lacking solid evidence and based on assumptions.

“We think that Special Counsel made a mistake of relying on the public sentiment,” Lee’s lawyer said, saying the accusation is only based on Special Counsel’s “prejudice” toward Samsung Group and its young heir.

The officials have consistently argued that they had been forced to provide donations out of fear of former President Park Geun-hye and Choi Soon-sil, and denied their chief Lee’s part in Samsung Group’s controversial decisions.

The ruling is expected to serve as a barometer for the fate of ex-President Park and her friend Choi, who were arrested and put on trial in connection with the scandal.

Park, who was removed from office in March over the corruption scandal, is on a total of 18 charges including bribery and abuse of authority. She is suspected of pulling strings to benefit Samsung.

If Lee is found guilty, it will likely deal a heavy blow to Park, who is accused of conspiring with Choi and Lee to make the alleged money-for-political favors deal.

The ruling on Park is expected in October.