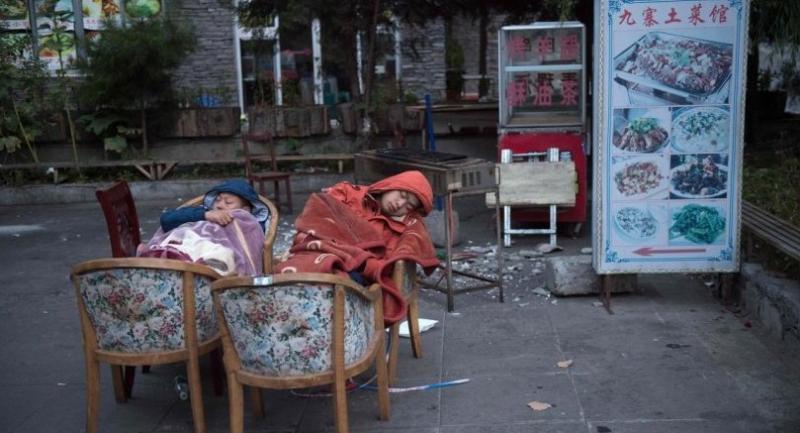 Residents fearing aftershocks sleep outside of their homes after an earthquake in Zhangzha in southwest China's Sichuan province on August 10, 2017. // AFP PHOTO

JIUZHAIGOU - China on Thursday ramped up its response to an earthquake that killed 20 people and injured hundreds, sending supplies and personnel into the mountainous zone as rescuers fanned out to search for more victims.

AFP journalists in Jiuzhaigou, a popular tourist destination near the epicentre of Tuesday night's 6.5-magnitude quake, saw dozens of relief and military trucks rolling through the remote corner of Sichuan province.

Locals took refuge in blue relief tents in several makeshift camps or out on streets in towns as more than a thousand aftershocks jolted the region and landslides kept nerves on edge.

Jiuzhaigou is an area populated largely by ethnic Tibetans and Qiang people. Its scenic landscape is popular with mainly Chinese tourists who flock to its national park, which is a UNESCO World Heritage site.

Nearly 60,000 people -- around half of which were tourists -- were evacuated from quake-hit towns and villages Wednesday.

More than 500 medical staff have been dispatched to the disaster zone, provincial official Qumushiha said at a press conference Thursday evening.

Authorities have said thousands of response personnel were sent into the area, as rescue workers search for at least four people still missing.

Yang Yongzhi was among a search team in red jumpsuits and hardhats who were forced by landslides to turn back Wednesday night after trying to press into cut-off valleys.

"We're responsible for finding if there are still people trapped over there. We're the first to go check," Yang said as the team prepared to make another attempt at reaching the isolated area.

The tremor evoked memories of a devastating 8.0-magnitude earthquake in the region in 2008 that left 87,000 people dead or missing, but the impact of Tuesday's disaster was comparatively light.

Authorities brought the death toll up to 20 on Thursday afternoon, with 431 injured, 34 seriously. A Frenchman and a Canadian woman were among those hurt.

The quake tore cracks in mountain highways and AFP journalists saw cars that had been smashed by giant falling boulders.

Some buildings in towns bore cracks, but few structures appeared to have sustained heavy damage.

One Jiuzhaigou hotel partially collapsed, however, and the body of a woman was pulled out of the rubble Thursday morning, provincial fire authorities said.

It was not known if others were still buried.

So far, 200 million yuan ($30 million) in government relief funds has been allocated for quake relief, according to authorities.

The government of Aba prefecture, where Jiuzhaigou is located, issued an appeal for donations.

The local government said it had repaired 129 telecommunication towers or other installations that were damaged by the quake, restoring communications with much of the affected area.

President Xi Jinping had called earlier for "all-out efforts to rapidly organise relief work and rescue the injured" in the Sichuan quake.