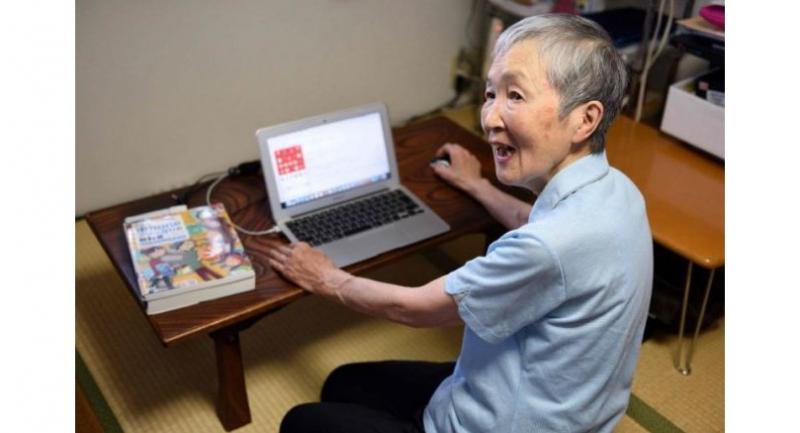 Masako Wakamiya created her first iPhone app at age 81 because she wanted to give other seniors something fun to enjoy on their smartphones or tablets. /AFP

TOKYO - A new global poll shows nearly 70 per cent of Singaporeans above 50 feel positive about growing older, though younger Singaporeans were more stressed out about the issue.

People who think about ageing the most are in their 30s, while those in their 70s worry the least about growing old, said a study by global consultancy firm McCann Worldgroup. It also found that people in their 20s fear death the most.

Titled The Truth About Age, the report, launched in Tokyo last week, polled 24,000 people across 35 countries, including the ageing societies of Japan and South Korea.

The study also polled 500 Singaporeans, and the findings largely conform to the global norms: Younger Singaporeans are more stressed out about ageing and afraid of dying than older people.

The report found that stereotypes are very much skewed towards common perceptions of how people of a certain age should look or behave, despite age having "undeniably become a much less reliable predictor" of style, success, health or attitudes.

"Age in this modern world is wildly complicated," said Ms Suzanne Powers, global chief strategy officer of the McCann Worldgroup. "But it is still one of the most useful and simplest measures that we have. Facebook has over 50 options for gender, but our age is our age - we can lie about it but we can't change it."

One Singaporean respondent in his 20s said: "Ageing for me is not just about retiring nor is it simply about 'getting old'. For me, it's about making sure I'm financially stable and able to support my loved ones. This is the most important thing when I think about the future."

In contrast, nearly 70 per cent of Singaporeans aged above 50 said they "feel positive" about the idea of ageing. One Singaporean respondent in her 70s was quoted as saying: "I'm not retired. I'm not working either. But when people ask me if I'm retired, I say no!

Among the Singaporeans polled, nearly half of those under the age of 30 said they constantly worry about growing older, compared with 36 per cent of those aged above 50.

Almost six in 10 aged below 30 agreed with the statement, "I'm afraid of dying", compared with three in 10 of those above the age of 50.

The report was launched in Tokyo in recognition of Japan's rapidly ageing population.

"Traditionally, the ageing conversation has been reserved for those above 65, but it should not be about a particular demographic, but about the process," Ms Powers said. "It goes far beyond the number we attach to ourselves."