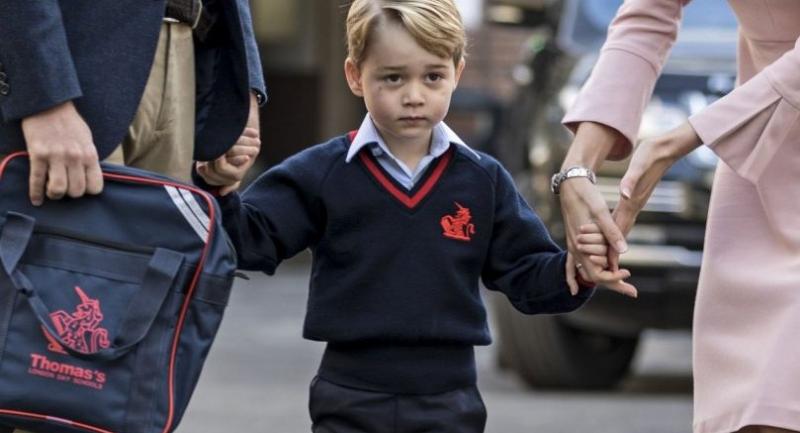 London - Britain's Prince George started his first day of school on Thursday but palace officials said his pregnant mother Kate was too unwell to attend and he was dropped off by his father Prince William.

Four-year-old George, who is third in line to succeed Queen Elizabeth II after his father and grandfather Prince Charles, is attending Thomas's Battersea, a private school in a leafy area of south London.

Father and son were met on arrival at the school gates by Helen Haslem, headteacher for the younger children, who then took them to Prince George's new classroom.

Dressed in the school uniform of navy blue v-neck pullover, shorts and black shoes, George looked slightly intimidated as he approached the building, holding on tightly to his father's hand.

He turned four on July 22 and will therefore be one of the youngest in his year as British children start their schooling in September after their fourth birthday.

Prince George's big day has caused a flurry of media interest in Britain, where every aspect of royal life is heavily scrutinised.

The Daily Telegraph even offered fashion tips for other mothers dropping off their children at the same school, instructing them to "wear nothing too challenging".

"No one will want to feel as though they are out-dressing a duchess," the paper said, adding that Kate would fit in well when she joins the school run with her "middle-class off-duty-dressing".

But despite all the attention, Ben Thomas, the principal of the school, stressed that the little prince would not be given "any special treatment at all".

"We are not going to try to mould him into any kind of particular person and we wouldn't do that with any of our pupils," Thomas said.

"I hope he will have the confidence to be himself with all his quirks and his idiosyncrasies and characteristics".

Kensington Palace on Monday announced that William and Kate, the Duke and Duchess of Cambridge, were expecting their third child.

Kate has been forced to cancel two public engagements since then because of the same acute morning sickness she has suffered in her previous pregnancies.

William spoke about her illness during a visit to a mental health conference on Tuesday, saying: "There's not much sleep going on at the moment."

"We need Catherine to get over this first bit and then we can start celebrating. It's always a bit anxious to start with, but she's well," he said.

Kate has not yet reached the 12-week stage when women normally make the news public but made the announcement after she had to cancel an engagement.

Hyperemesis gravidarum causes excessive nausea and vomiting and affects around one in every 100 pregnant women, according to the state-run National Health Service (NHS).

Some women report being sick up to 50 times a day, and while most common in early pregnancy, symptoms can continue throughout the nine months.

William and Kate moved back to London from their rural home in eastern England this summer as they take over more engagements from the ageing senior royals.

The 91-year-old queen has reduced her public events in recent years and Prince Philip, her 96-year-old husband, officially retired in August.

William gave up his job as an air ambulance pilot in July and relocated his family from Anmer Hall in Norfolk to their apartment at Kensington Palace.//AFP